Metal particles, in a stable dispersion, that are small enough to resist gravity from causing settling of the particles but large enough to be restricted from passing through a membrane are referred to as colloidal metal particles. These colloidal metal particles have their particle sizes in the range of 1 – 100 nm. Colloidal Metal Particles are primarily used as catalysts and/or photocatalysts, adsorbents. They are used in drug delivery applications and in dietary supplements, either directly or in combination with other ingredients.

In terms of value, the gold colloidal metal particles segment is estimated to account for a significant proportion of the market. However, in terms of volume, the segment holds single digit share in the overall market. This is mainly due to the vast disparity in prices of these product types. Types, such as silver colloidal metal particles, have proven to be effective against allergens and pathogenic infections. Colloidal silver particles are also noted to be effective in the treatment of various skin conditions, such as acne, chickenpox, among others.

Colloidal copper is noted to be an antioxidant and serves blood cleansing purposes. The OTC (Over the Counter) availability of majority of colloidal metal particles allows these particles to reach a wider audience. 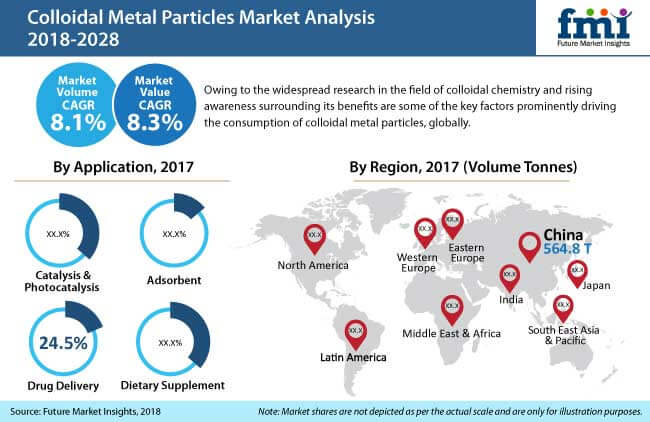 Application wise, the market is segregated into catalysis & photocatalysis, adsorbents, drug delivery and dietary supplements. The use of colloidal metal particles as catalysts is gaining prominence as their better surface area to volume ratio escalates their efficiency in rapid and controlled reactions. The end use industry has been noted to be making a transition towards such catalysts, thereby propelling the market of colloidal metal particles.

The overall market is assessed to have been valued at US$ 14,542.6 Mn at the end of 2018 and is anticipated to reach a value of more than US$ 32 Bn by the end of the forecast period. The colloidal metal particles market is estimated to expand at a growth rate of over 8.3%, representing an incremental $ opportunity of over US$ 17 Bn between 2018 and 2028.

From a regional perspective, China alone is anticipated to consume a substantial proportion of the colloidal metal particles production throughout the forecast period, registering 7.6% growth between 2018 and 2028. Countries in North America and Western Europe are also noted to hold sizeable market share. The Latin America colloidal metal particles is estimated to witness fastest growth in the market and will expand at a value CAGR of 10.4%.

The prominent players involved in the colloidal metal particles marketplace are aiming to adopt greenfield investment strategies. The companies are engaging in product launches and capacity expansion activities, with the aim of improving their market share and geographic presence of their products. For example, AkzoNobel Specialty Chemicals (while it was still a part of AkzoNobel) has invested over US$ 4.5 Mn for capacity expansion projects.