The demand for fire extinguishers is growing due to an increase in the number of fire fatalities in homes and businesses. Fire extinguishers are key units for fighting fire, especially in closed spaces. These products are designed to be simple to minimize fire risks in times of emergencies.

Alternatives such as hydrant systems and automated fire sprinkler systems, require firefighting professionals or specialized infrastructure, which have limited reach in confined spaces. Even sprinkler systems are not very feasible owing to high costs.

The global fire extinguisher market is expected to expand significantly during the assessment period. Increasing construction activities for the creation of commercial spaces, new industrial plants, and the launch of new housing projects, coupled with the introduction of strict fire safety regulations, are contributing to the global fire extinguishing market.

Furthermore, advancements in sound and gas based firefighting technology, will also influence the growth of the market in the near future. The global fire extinguisher market is estimated to be valued around US$ 3.6 Bn in 2021, exhibiting 1.1 X increase over the previous year. Future Market Insights expects the global Industrial Fire Extinguisher market to expand at over 5.5% CAGR through 2031.

What is the Commercial Potential of Fire Extinguishers?

The demand for fire extinguishers is projected to surge with a projected CAGR of 5.4% by sales in volume (units). Increasing implementation of strict regulation by governments, particularly in developed economies like the U.S., certain countries in Europe, Japan, and Australia primarily in industrial and commercial spaces generate interest, owing to high-convenience products.

Future Market Insights estimates that more than six out of ten fire extinguishers are sold in the commercial and industrial sectors. Leading companies are incorporating tech-driven manufacturing strategies to expand into the most challenging industrial areas, such as mining, oil and gas, and waste management, where the risk of fire loss is significantly greater.

Product design strategies are impacted by the need for fire extinguishers to survive extreme environments and extreme corrosion conditions in these end-user segments, which will support investments into R&D efforts.

How Large is the Opportunity in the U.S. Market?

Future Market Insights has projected the U.S. to remain as one of the most lucrative markets through the forecast period. According to the research, the market value was estimated at over US$ 1 Bn in 2021.

The key factor supporting market expansion in the country is the rise in construction activities, and the enforcement of stringent fire regulations, by bodies such as the National Fire Protection Association (NFPA) which publishes codes and standards intended to minimize the possibility and effects of fire and other risks.

Furthermore, lucrative growth in defence, marine, and tourism industries also paves the way for market growth in the country to the tune of 5.6% per annum.

What is the Outlook in Germany for Fire Extinguishers?

Germany is anticipated to dominate the market during the assessment period among European countries.  The nation is expected to account for 16% value share of the Europe market in 2021.

Federal states are in charge of fire safety in Germany, which is governed by the national model building code. A structure that is vulnerable to fire risks is inspected on a daily basis to ensure that it meets fire safety requirements. As a result, strict fire protection regulations are likely to boost the country's progress.

What Factors are Driving Sales of Fire Extinguishers in China?

China is one of the key nations experiencing rapid industrialization and automation growth, owing to which it is exhibiting a substantial increase in demand for fire extinguishers.

The market is expected to reach a valuation of US$ 540 Mn in 2021. Reconstruction practices, increased construction activities resulting from the growing population and government-enforced fire safety codes, including China's Code of Design for Building Fire Protection and Prevention are all driving the market in the country.

What is the Market Scenario for Fire Extinguishers in India?

The India market for fire extinguishers is estimated to rise at a CAGR of 7.4% (1.3X of global market growth average) during the forecast period. Commercial offices are expected to produce significant profits for the market based on end-user sector.

The rising awareness and enforcement of regulations in the region has resulted in a high demand for fire safety systems and equipment in workplaces, which is expected to support the growth of fire extinguisher market in India.

Manufacturing activities in the region are expected to attract new market participants to invest in the region, simultaneously promoting new materials and technologies in the market.

How are GCC Countries Faring in the Fire Extinguisher Industry?

GCC countries particularly Saudi Arabia, United Arabia Emirates and Qatar are identified as lucrative markets for fire extinguishers. These countries are expected to record a CAGR of 5.3% during the forecast period.

The demand for fire extinguishers is likely to continue growing in the future on the back of infrastructure expansion and stringent regulations for the construction and maintenance of residential and commercial properties in this region.

With the tourism and recreation sector taking a jump in recent years, the increased flow of capital and related infrastructure will support the growth of the region’s fire extinguishers market.

Dry chemical fire extinguishers are anticipated to remain dominant, accounting for around 20% of overall consumption volume by the end of 2031. Growth can be attributed to multipurpose applications in varied end use sectors.

Since the extinguishing agent in these products is dry in nature, there is minimum damage to electrical appliances at the hazard location. Dry-chemical fire extinguishers mostly find use in industrial settings, such as warehouses and manufacturing units.

Carbon dioxide portable extinguishers are anticipated to display promising growth during the forecast period, due to their high demand in commercial spaces. These products are exceptionally successful in Class B and K fire types that leave no residue and collateral damage. Furthermore, water and foam extinguishers will reflect notable growth.

Which Fire Type Contributes Most to Fire Extinguisher Sales?

Class A fires are those that include solids and are estimated to offer an incremental opportunity of US$ 1.4 Bn during forecast period ending in 2031. Paper and cardboard, which are used in offices and factories, could be Class A fuel.

Furniture or fixtures and fittings may also be involved. Since solids are the most common source of fuel while being difficult to eliminate, this is one of the most common class of fires.

Who are the Leading End Users of Fire Extinguishers?

Fire extinguisher manufacturers will experience increasing demand from various end-use sectors. Commercial sector applications will account for maximum demand in upcoming years due to investments in the sector in many countries.

In addition, increased construction sector spending will further create market prospects. The segment is expected to generate an incremental opportunity worth US$ 1.2 Bn in the forecast period through 2031. 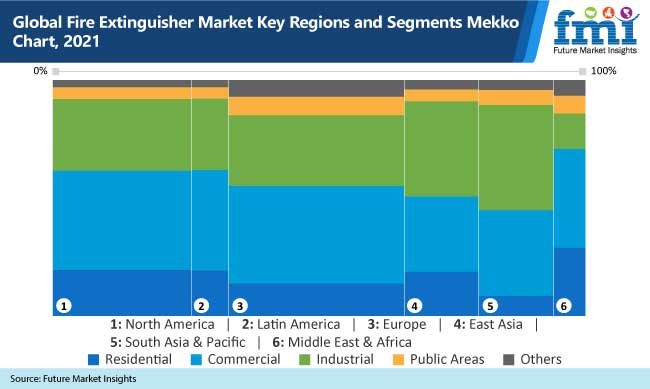 Key market players also are focusing on strategies involving new dealership networks and collaborations. Investments in research and development for novel products are anticipated to boost the growth. For instance: