Fish is considered to supply approximately 15% of per capita protein consumed by people around the world. Low carbon footprint, high per unit yield, and unique protein content have spurred consumption of fish, which is subsequently aiding the expansion of the aquaculture sector viz.a.viz. the demand for fish feed.

Aquaculture is a sector characterized with impressive growth for the overall feed industry, which also withhold remarkable supply capacity. The global fish feed market has witnessed its share of operational transition and transformation, but the concept of nutrition in fish feed is at its epitome and have rarely been reported in the past.  Increasing knowledge sharing across various channels by government agencies and independent regulatory groups has resulted in the rapid adoption of aquaculture techniques, worldwide.

The number of fisheries and farmers have also doubled in the last few years, creating a fresh wave of demand for fish feed. FMI sees no slowing down of this trend and projects the aquaculture sector to report a high value CAGR of above 5% between 2020 and 2030.

According to the Food and Agriculture Organization (FAO), the global fish production is expected to have reached nearly 170 million in 2018. With world’s appetite for fish and fish products showing no signs of contracting, the demand for fish feed is poised to surge exponentially in response to the expansion of aquaculture sector.

The novel aquaculture system is exploiting plant-based sources to adopt a system that has the potential of reducing the cost of production as well ensure sustainability.

Plant based fish feed ingredients such as soybean, corn, sunflower, pea and others which are naturally rich in protein are in high demand in the feed industry. Soybeans are considered as best source of protein for fish feed.

Not only does soy feed replicate several nutritional requirement crustaceans and fish, it is easier to source and generally inexpensive. Soy is already successfully used in many aquaculture diets. In the coming years, the demand for other plant-based products is expected to rise as well.

Advances in protein content, omega-3 levels, and digestibility are spurring the demand for plant-based feed ingredients as a popular alternative to fishmeal. FMI projects the plant-based fish feed segment to account for nearly one-fifth of proceeds earned by the fish feed market in 2020.

The fish feed market share is gearing for a major industry disruption. There is limited supply of key aquafeed ingredients, especially those derived from wild-caught fish and their prices are highly volatile

As a result ingredients derived from wild fish will become more strategic ingredient in the future. Subsequently, the limited supply of traditional fish meal creates lucrative prospects for innovations to fill the gap.

Alternatives such as processed animal proteins and soy meal are not without shortcomings. This has created a high demand for something more reliable with a better optimized nutrient profile.

Production of sustainable and alternative fish feed such as algal, bacterial, and insect-based protein is therefore picking up pace, paving way for the entry of innovative fish feed producers. With these companies racing to reach their commercial targets, the market will witness the launch lower cost feed.

Inadequate manufacturing, warehousing, and transport facilities are affecting the quality and timely supply of fish feed to consumers. Due to poor capability of supply chain, fish feed products cannot be stored, which is restraining the growth of the market.

Store owners cannot maintain a stockpile, keeping in mind the future demand and have to maintain low inventory due to the lack of storage facilities and inadequate transport channels. These bottlenecks may hamper the growth of the market to an extent.

Some of the leading feed producers are focusing on sustainable methods of production to align themselves with UN SDGs (Sustainable Development Goals).

Judicious use of marine resources and favorable ecological footprint of farmed fish have encouraged the local players in the market to increase their production capacities.

There is an inclination towards the use of algal oil as an omega 3 source, innovative pea protein obtained from natural gas as a carbon source, and various other alternatives as fish meal replacements.

The manufacturers are expected to develop nutritious fish feed to attract consumers.

Asia Pacific has been a key hub of fish feed manufacturing from more than two decade now due the abundant availability of fresh water resources and rich aquaculture in this region.

China is the world largest producer and consumer of aquatic products, which makes Asia Pacific a lucrative market for fish feed. The demand for carotenoids as ingredient is growing at a significantly high rate due to the rising demand for ornamental fisheries especially in Japan.

Japan however relies heavily on Peruvian fishmeal import. Therefore, it is unlikely to stay immune to the heavy losses faced in the Peruvian market due to El Niño and depletion of anchovy.

Also, the recent depreciation of Yen has made fishmeal more expensive for Japanese fishmeal importers. Especially during the spring season, when the demand for fishmeal is remarkably high, it gets increasingly difficult for Japan to find cheaper priced fishmeal.

During this period, importing from regions such as Southeast Asia and Africa is regarded as an excellent opportunity for the country. Also, fishmeal imported from these regions is comparatively cheaper, which will support the Japanese economy.

Pricing is a key variable, impacting the demand for fish feed. A key point to note here is that pricing of fish feed per unit is rarely same between regions. Despite the difference in pricing, it is common to witness a similar pattern of price variation between regions.

The graph below depicts differences in prices of fish feed across key regions: 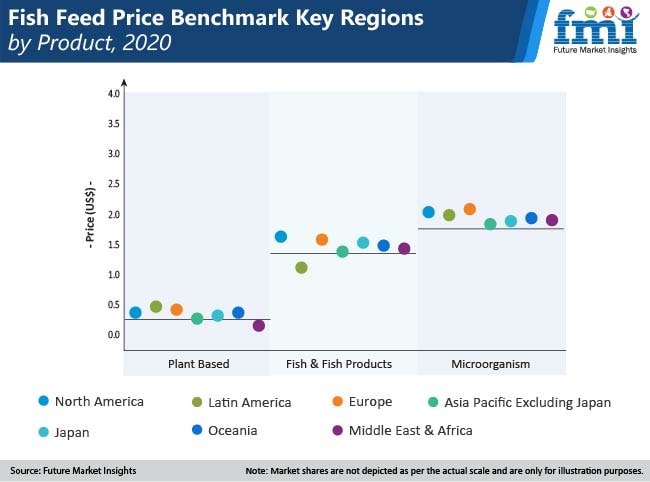 Manufacturers are focusing on including natural ingredients without hampering the nutritional value of fish feed. Mentioned below are some of the key players in the fish feed market:

Fish feed producers are seeking out alternative sources of protein for a more sustainable growth in the future. They are rebooting their production strategies and business policies to cater to the rising demand for. For instance, there is ample focus on algae protein as a sustainable alternative.

Oil derived from microalgae, contains omega-3 fatty acids and high levels of protein necessary for most fish species. The superior protein content in algae indeed delivers improved yield and growth crate. The production process is more scalable, helping producers to minimize their land and water use.

Besides this, several companies in the agribusinesses are developing using a process to place bacteria in a fermentation tank and feed them methane to produce fish feed. The technology is particularly designed to ensure productive use of industrial byproducts such as w3aste carbon and ethanol.

Fast growing insects that feed on cereal by products and food waste are touted as another excellent and sustainable alternative source of fish feed. They already have been approved by the EU for use in aquafeed market.

The availability various alternatives is expected to give significant impetus to the fish feed market price in the coming years.