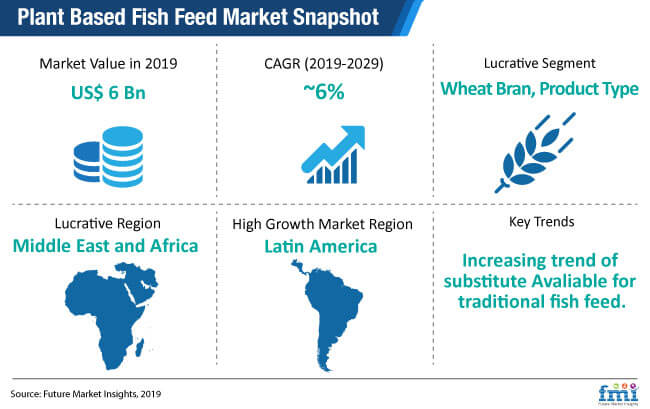 North America and East Asia are at the forefront in terms of investment in the development of innovative and novel plant-based fish feed.

Apart from major producers such as China and Egypt or significant importers such as the U.S. or other European countries, aquaculture is still widespread in other emerging markets. The aquaculture market is gaining traction over other species in various countries across the world. Emerging markets such as Fiji, India, etc., are promoting fresh water fishes as good for health and for the environment in a season when many marine stocks have been severely depleted.

Slowly and steadily, the product is gaining retail shelf space in far remote areas of these regions due to its ability to breed quickly, taste bland, and survive harsh environmental conditions. This retail shelf space of aquaculture worldwide is directly impacting the demand for plant-based fish feed.

Dwindling Supply of Feed Forcing Development of a New Solution

In the current scenario, the feed industry is not able to fulfil production capacity because of low stocks of traditional inputs, such as menhaden and anchovy, are declining. Overfishing of small species in key production regions of Latin America and Europe has caused sources to drop to unsustainable levels, and some species are likely to never fully recover.

Fish meal and oil are used not only for aquaculture, but also as ingredients in common foods. These factors are expected to generate high demand for plant-based fish feed and drive market growth in the forecasted period.

Fish feed manufacturers need support from investors to grow and investors have medium- to long-term horizons and a willingness to invest in capital-intensive infrastructure. Manufacturers are exploring new ways to overcome this problem. Therefore, plant-based fish feed is the best alternative to traditional ingredients in fish feed, which reduce the cost of production as well as ensure a good source of protein.

Plant-based fish feed is expected to offer better long-term value but to withstand the price fluctuations of fish and grain meals, it may compete on enhanced functionality as compared to other sources of fish feed. 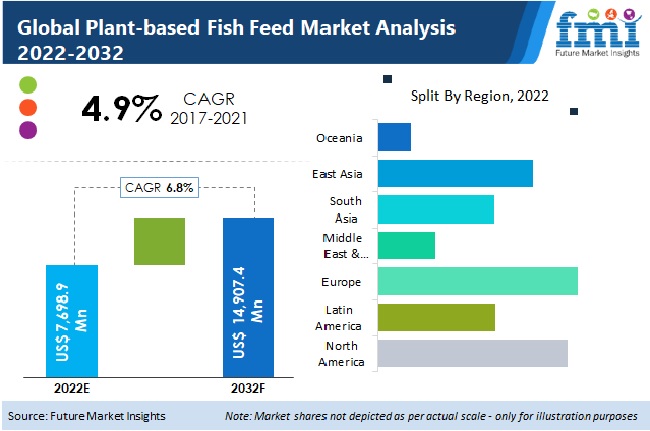 The plant-based fish feed market is projected to witness noteworthy growth in the coming years owing to several crucial growth factors. Growing concerns over sustainable development of aquaculture, limited availability of fish species, and demand for feed with low environmental footprint among others have influenced the market growth in recent years. Sustainability of aquaculture has been a major concern for several decades as it requires more fish to feed than the rate at which fish is produced.

Currently, as the consumption rate overpowers the production rate, it has raised alarm bells as far as sustainability is concerned. Hence, finding alternatives for traditional fish feed including fish meal and fish oil has become pivotal in the last couple of decades. Expanding aquaculture without diminishing fisheries is a key challenge that needs to be addressed moving forward.

Fish oil is expensive and scarce due its growing demand as a health supplement. Thus, players involved in the fish-feed market have started focusing on developing cost-effective alternatives which do not compromise with the desired nutritional value required for optimum growth in fish.

In recent years, plant-based fish feed derived from soybean, canola oil, supplement lipids from algae sources and amino acid supplements gained significant amount of popularity owing to their long-term benefits. Further, as plant-based fish are safer to eat and contain 100-fold low levels of polychlorinated biphenyl and mercury, its demand is expected to grow in the coming years.

According to the United Nation’s Food and Agriculture Organization (FAO), aquaculture, which is one of the fastest-growing industries, accounts for than 50% of the global edible seafood supply. However, industry players have established that investment in innovation and R&D will be the key to finding feed alternatives.

In the current scenario, although the production of novel fish meal and fish oil alternatives is small-scale, market players pin their hopes on sourcing these ingredients to produce innovative aqua feed alternatives tailor-made for species according to their nutritional requirements.

In the current scenario, North America and East Asia are at the forefront in terms of investment in the development of innovative and novel plant-based fish feed. Further, market players and prominent companies in the aforementioned regions are increasing their R&D activities in their efforts to meet the growing demand for alternative fish feed products. In addition, as fish meal and fish oil prices head towards the upward direction, the demand for plant-based fish feed is expected to grow worldwide.

The growing demand for alternative fish feed coupled with rising concerns over aquaculture’s dependability on fish meal and fish oil have paved way for plant-based products. Plant-based fish feed have gained a significant amount of popularity in recent years owing to factors such as progress in digestibility, the protein content, and omega-3 levels.

In the current scenario, advanced soy products including, soybean protein concentrate (SPC) and fermented soy are tipped to be the top contenders moving forward with plant-based ingredients. Further, as these products play an instrumental role in decreasing anti-nutritional factors in soy, it enhances digestibility. Moreover, soy products are expected to substitute a high proportion of fishmeal in the aquaculture industry in the coming years.

Further, apart from replicating the nutritional requirements of fish, soy products are also cost-effective. Thus, several companies are seeking ways to leverage the benefits of plant-based products by relying on innovation and R&D activities.

The high demand for farmed fish food has generated high demand for fish meal that has led to a significant increase in its prices. Thus, several fish farms especially in the developing nations have established feed alternatives such as plant-based fish feed as one of the most feasible and viable substitutes for fish meal and fish oil.

In the current scenario, North America and East Asia are at the forefront in terms of investment in the development of innovative and novel plant-based fish feed. Further, market players and prominent companies in the aforementioned regions are increasing their R&D activities in their efforts to meet the growing demand for alternative fish feed products. In addition, as fish meal and fish oil prices head towards the upward direction, the demand for plant-based fish feed is expected to grow worldwide.

What is the size of plant-based fish feed market?

Which are the leading companies in plant-based fish feed market?