The demand for plant-based protein supplements has greatly surged in the last few years. With an increasing number of consumers around the world adopting vegan lifestyle, the global plant-based fish market is slated to witness impressive growth.

Surging environmental concerns coupled with the rising cases of food sensitivities related to the sea-foods are pushing an increasing number of people towards plant-based alternatives. The exponentially rising demand for alternate dietary products is further aiding plant based fish sales across the world.

Being allergen-free, 100% vegan, without any side effects, and safe for the lactose intolerant people, plant-based fish products are hugely preferred among the consumers of all ages. According to Future Market Insights (FMI), the global plant-based fish market is expected to grow by 28.0% CAGR during the forecast period from the year 2020 to 2030.

Various international organizations such as  are undertaking initiatives to spread awareness about the benefits of embracing plant-based lifestyle on health, animal society, and overall environment. For instance, an U.K. based organization called Compassion in World Farming, has launched a campaign, which they dubbed as Rethink Fish urging supporters to build pressure on the government to improve conditions for fish.

Such initiatives are intended at educating consumers about animal cruelty and hazards animals bred in unhealthy conditions can pose to human health and environment. Driven by this, the demand for plant-based fish is likely to surge in the coming years.

Consumers in general have become more conscious about their health and wellness. Plant-based fish products being allergen-free, mercury-free, purely vegan & safe, free from side-effects, and with long shelf-lives are widely preferred by an increasing number of consumers around the world.

Plant-based fish products are enjoying the limelight, especially with an increasing number of consumers choosing a healthy lifestyle. With more people focusing on fitness, the demand for different sources of protein has surged, making plant-based protein options highly sought-after among vegan or vegetarian population.

Plant-based fish is considered ideal to fulfil the protein requirement in vegan diets. This also helps consumers to avoid the risk of any side-effects. Plant-based fish products are also suitable for the people looking for lactose-free diet, as it can meet the dietary requirements while being produced from only plant-based ingredients.

Plant-based fish products require advanced method during the production, packaging and distribution. As these products are meant for longer use, special attention is needed in all stages of manufacturing. The entire process needs the supervision of experts and modern equipment.

Lack of knowledge may come in the way of making it more versatile. Added to this, plant-based fish products are often towards the higher range of cost and hence may not be affordable by all the population having protein requirements.

In 2020 the COVID-19 pandemic has brought the plant-based fish market to a standstill. Restrictions imposed to curb the spread of the virus have resulted in disruption in manufacturing due to lock down, scarcity of raw materials, and decreased manpower. This could hamper the growth of the market to an extent.

Europe has emerged as a highly lucrative market for plant based fish. Driven by back to back product launches by start-ups and the presence of several celebrated food chains offering plant based fish products in their menu, the Europe market is expected to showcase impressive growth. 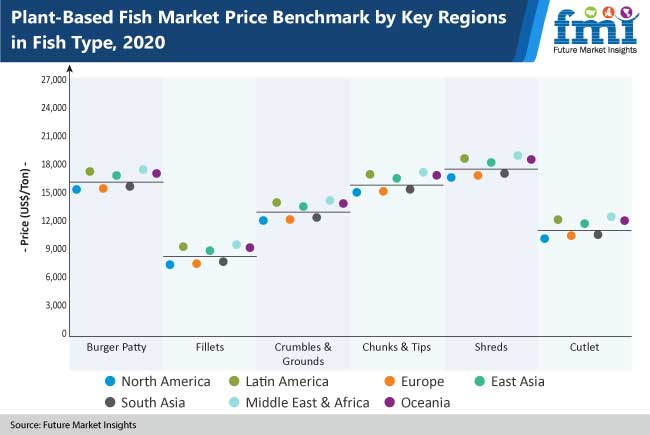 With consumer interest towards plant-based fish growing, more companies are likely to launch fish alternatives. For instance, a Swedish startup called Hooked has claimed that it is developing the “world’s first” plant-based shredded salmon. The rapidly increasing demand for seafood and fish alternatives in the U.K, Germany, France, Spain, and others, will therefore make Europe an attractive market for plant based fish producers.

North America being the most lucrative plant-based fish market, holds high potential with the penetrating growth of the manufacturing sectors as well as distribution channels.

As more people are being conscious of the environmental crisis, they are opting for vegan food without compromising with the nutritional values. Vegan food is gaining immense popularity in the U.S, Canada, Mexico, among other countries. Steered by changing consumer preferences, behemoths such as Impossible Foods has announced that it is gearing to launch plant-based fish.

Meanwhile, Good Catch has raised a whopping US$ 32 Mn financing in January 2020 for its plant-based seafood and Atlantic Natural Foods has already started offering a fishless tuna alternative, called TUNO, made from yeast, soy, and sunflower extracts in 2018.

Spurred by similar developments, the North America market will remain highly lucrative through the forecast period.

Region-wise East Asia has emerged as one of the key markets backed by the demand from countries such as China, Japan, North Korea, and others, the demand for plant-based fish products are rising fast.

Burger Patty to Maintain the Lead

Burger patty is generally a round and flattened serving of fish and other veg/non-veg products alternatives. Starting from healthy salad to cheeseburger pasta, burger patty is popular for its diverse range of usage. It is due to its diversity that burger patty has emerged as a key product in the market for plant based fish.

Due to its cost-effective, and hassle free production and distribution process, burger patty is highly preferred worldwide. As it meets the nutritional requirements while serving the taste buds, burger patties are expected to continue leading the product type-wise category throughout the forecast period.

Soy-based protein is enriched with plant protein. As plant proteins have significant cardiovascular benefits, starting from lowering blood pressure to strengthening heart, it is highly preferable by the fitness enthusiasts as well as health conscious people.

Soy-based protein being naturally cholesterol-free and low in saturated fat, are highly demanded by the various age-grouped people including the elderly people, and the people with cardiovascular diseases.

According to FMI, soy-based protein will sustain as the dominating segment in the source-wise category.

As various kind of plant-based fish products such as noodles, fish rolls, breakfast items, and other frozen products are widely sold at the hypermarkets, it is expected to remain in the key position throughout the forecast period.

With competition getting fiercer, companies operating in the plant-based fish market are focusing on product launches to gain competitive strength. For instance, MorningStar Farms has launched their extensive range of plant-based fish products such as burgers, customizable breakfast options, hot dogs, Meal Starters™, Veggitizers™, and others along with their exclusive set of recipes to attract potential customers.

Nestle too has recently launched plant-based tuna fish, which it promises has taste and texture of original. The global food giant’s vegan tuna will initially be launched in Switzerland, and will later be rolled out further.

According to FMI, the global plant-based fish market is expected to experience strong competition during the forecast period.