2020 Analysis and Review: Gaucher and Pompe Diseases ERT Market by Route of Administration – Oral, Parenteral for 2020-2030

The global Gaucher and Pompe Disease enzyme replacement therapy (ERT) market is poised to grow at a value CAGR worth 5.6% through 2020, owing to the growing prevalence of genetic disorders across the globe.

As the COVID-19 pandemic unfurled, the market registered an initial downturn, owing to shifting priorities of healthcare organizations to treat infected patients, leading to postponement or delaying of other treatments. However, growth has rebounded significantly in recent months.

Although the disorder impacts less than 200,000 individuals, its global burden has risen immensely in recent years, compelling healthcare providers to accelerate research and development on possible drug and vaccine candidates.

The global burden of lysosomal storage disorders (LSD) has aggrandized in recent years. Based on an exhaustive study undertaken in Australia between January 1980 and December 1986, over 27 LSDs were diagnosed in over five hundred individuals.

At least 1 in 57,000 infants was diagnosed with Gaucher disease while 1 per 4.2 million live births detected evidence of sialidosis. Since then, at least 41 distinct genetic diseases became part and parcel of LSDs.

Attributed to this increasing incidence, government bodies across the world are encouraging efforts to accelerate development of effective treatment solutions based on enzyme replacement therapy (ERT), leading to the spawning of numerous manufacturers across key regions.

The National Center for Biotechnology Information (NCBI) estimates that between 1983 and 2019, 124 orphan drug designations were granted by the Food & Drug Administration (FDA) for compounds intended to treat 28 lysosomal storage diseases.

These designations were mostly for Gaucher disease (16), Fabry disease (10), Pompe disease (16), Mucopolysaccharidoses (MPS) II (10), MPS I (9) and a host of other genetic disorders. Presently, the drug development pipeline for LSDs is ever evolving, with high focus on gene therapy and small-molecule targets.

The Nudge from Key Collaborations

The Gaucher and Pompe Disease ERT market is characterized by numerous collaborations and alliances amongst major players to fast-track development of replacement enzymes, an important growth catalyst for the market in forthcoming years.

For instance, in 2018, Takeda Pharmaceuticals, formerly Shire PLC, entered into a collaboration with NanoMedSyn to further research for potential lysosomal storage disorder treatment based on the latter’s proprietary AMFA technology.

Likewise, in 2017, Protalix Biotherapeutics entered into a license collaboration agreement with Chiesi Farmaceutici S.p.A with the objective of commercializing its pegunigalsidase alfa (PRX-102) for the treatment of Fabry disease in markets outside the United States.

While ERT has significantly improved the prognosis in infantile and later onset of Pompe and Gaucher Diseases, inefficiencies regarding distribution and uptake in the target muscular system has prompted healthcare providers to find alternative approaches for more effective treatments.

Moreover, the presence of the blood-brain barrier and pathological preconditions further prove to be obstacles for effective uptake of ERT. Efforts are thus underway to develop more precise and accurate treatment methods.

For instance, a research team from the Cincinnati Children’s Hospital have touted the C5aRA molecule as a more effective approach to counter a molecular pathway which drives pro-inflammatory processes in Gaucher Disease.

Europe is likely to dominate the market, generating 30% of the global revenue by 2020-end. Growth is attributed to numerous regulatory approvals granted to multiple treatment approaches in recent years.

Recently, in October 2020, the European Medicines Agency (EMA) accepted a review of the Marketing Authorization Application (MAA) for avalglucosidase alfa ERT for long-term treatment of patients with Pompe Disease.

Besides this, numerous approvals for other disorders requiring enzymatic therapy have also opened up the market for massive investments, For instance, in 2017, Allergan received approval for its Enzepi pancreatic ERT by the Committee for Medicinal Products for Human Use (CHMP) for use by infants, children and adults.

Until 2019, North America generated 1/4th of the global revenue share in the Gaucher & Pompe Disease ERT market. Growth is attributed to the high incidence of genetic disorders amongst the local population.

As per the National Organization for Rare Disorders, nearly 6,000 individuals across the United States are afflicted by Gaucher disease, thus broadening the scope for treatment in recent years. 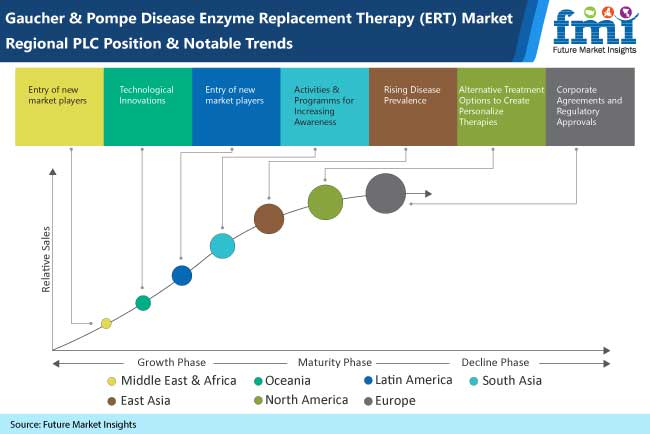 Presently, the FDA has approved numerous ERT and SRT (Substrate Reduction Therapy) drugs such as Cerdelga®, Zavesca® and VPRIV® across multiple healthcare settings.

The East Asian market is yet another lucrative revenue hotspot for the Gaucher and Pompe Disease ERT market. Growth is primarily attributed to a proliferating healthcare infrastructure in order to deliver state-of-the-art medical treatment.

Since the medicines are quite expensive, governments are subsidizing rates to alleviate financial strain on customers. For instance, in China, one Cerezyme treatment session costs around 23,000 yuan (US$ 3,250), totaling to over 2 million yuan annually.

Provincial governments, therefore, are providing public health insurance which covers up to 80% of Cerezyme treatments such as in Qingdao. Such measures are helping patients avail treatment on a much larger scale, thus broadening growth prospects.

Request a sample specific to the East Asian market.

Type-1 Gaucher Disease is the most prevalent condition, also called neuronopathic Gaucher Disease, as it leaves the brain and spinal cord intact. The disease occurs in 1 out of 50,000 to 100,000 people, mostly affecting the Ashkenazi Jews of Eastern and Central Europe.

According to the National Center for Biotechnology Information (NCBI), around 4% of American adults suffer from dysphagia, while a significant proportion cannot swallow a drug due to nausea. Based on these factors, the parenteral administration segment is expected to generate over 80% of the revenue by 2020.

Hospital and specialty treatment pharmacies are expected to constitute 3 out of 4 sales of ERT drugs and injections throughout 2020, attributed to high degree of reliability regarding availability of the prescribed medications.

However, sales across online pharmacies are experiencing notable upsurge, expanding at over 7% CAGR by the end of the current year. Growth is largely attributed to increasing frequency of home-based ERT treatments in the wake of the pandemic crisis.

COVID-19 has deeply impacted the global healthcare industry. According to IMF’s World Economic Output report published in April 2020, the burden of pharmaceutical industry contraction has been heavy for the developed world, which have experienced an economic deceleration worth 6%, a significant drop in comparison to the 2007-2008 financial crisis.

With respect to surgeries and treatments, top priority is being given to COVID-19 positive patients, leading to delays and postponement of several procedures. This has also impacted the Gaucher & Pompe Disease ERT segment, with countries such as Spain recording a shortfall of nearly a quarter for hospital-based treatment.

Fortunately, the blip has not lasted for long, with government authorities directing healthcare providers to resume treatment for Type-1 and Type-3 Gaucher Disease patients. Studies have concluded that people suffering from this disorder also have co-morbidities which could jeopardize their survival rate in case of a COVID-19 infection.

Prominent players profiled in FMI’s study on the market include*:

*This list is indicative- full details about Gaucher & Pompe Disease market players are available upon request.

Sanofi SA is an important pioneer in the field of ERT for Gaucher Disease. Its Cerezyme® injection, manufactured by Genzyme, a subsidiary of Sanofi, is the only ERT which has shown long term efficacy and safety across multiple studies for pediatric and adult patients diagnosed with Type-1 Gaucher Disease.