Hypercalcemia is a condition caused by above normal levels of calcium in the body, with serum calcium level greater than 2.6 mmol/L. It is a life threatening metabolic disorder associated with neoplastic diseases and occurs in 10% to 20% of all adults suffering from cancer; particularly lung and breast cancer, and myeloma.

Early diagnosis of hypercalcemia by hydration and treatment with agents – to decrease serum calcium concentrations – also known as hypocalcemic drugs can produce symptomatic improvements within three to five days. The scope of hypercalcemia treatment market study is for Bisphosphonates (Clodronate, Etidronate, Ibandronate, Pamidronate and Zoledronic acid), Calcitonin, Glucocorticoids, Denosumab and Calcimimetics for treatment of malignancy-related hypercalcemia.

Based on product type, the market has been segmented into Bisphosphonates (Clodronate, Etidronate, Ibandronate, Pamidronate and Zoledronic acid), Calcitonin, Glucocorticoids, Denosumab and Calcimimetics.

Revenue from the independent pharmacy and drug stores segment is expected to grow at a very fast pace, and contribute significantly towards distribution of hypercalcemia drugs during the forecast period. Hospitals distribution channel segment is projected to generate comparatively high revenue owing to novel and easy availability of hypercalcemia treatment drugs worldwide. 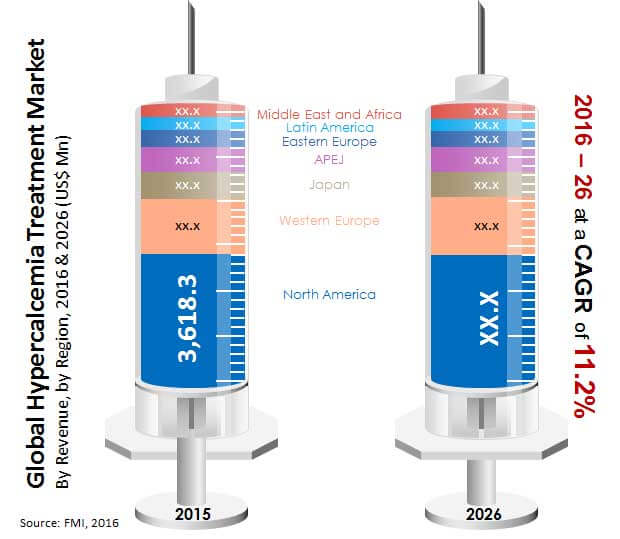