[350 Pages Report] According to Future Market Insights (FMI), The Global Infant Nutritional Premix Market size was estimated at USD 235 million in 2021 and expected to reach USD 370 million in 2032, at 4%.

Over the projection period, demand for infant nutritional premix is expected to increase significantly. The increased need for convenient and nutritious infant food has resulted from the fast migration of working women in urban areas.

Consumer awareness of the possible health benefits of infant food has prompted them to consider these items as a viable alternative to nursing. By the end of 2032, the global market is expected to have grown by about twofold, reaching a value of USD 370 million.

Premix is a mixture in which all of the essential nutrient components are blended in the proper proportions. Infants require the optimal intake of vitamins and minerals to ensure effective postnatal growth and to decrease newborn morbidity and death. As a result, to meet their nutritional needs, newborns are fed a high-nutrient food premix. Infant nutrition is a broad category that encompasses a wide range of infant nourishment items for babies and infants.

Because of the rising knowledge about the benefits of newborn nutritional premixes produced with organic ingredients, vitamins, probiotics, and amino acids, they are becoming more widely used around the world. 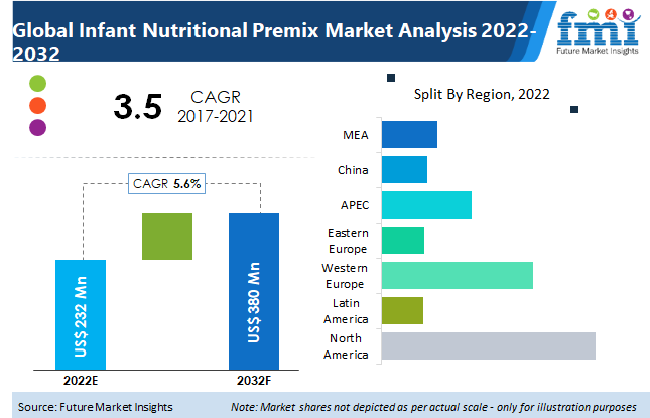 Demand for customized premixes is on the rise

Because of the growing knowledge of the benefits of fortified infant products, customers all over the world are increasingly turning to personalized premixes manufactured with pure protein. The leading companies throughout the world are also concentrating on producing customised mineral and vitamin premixes, which is driving the Infant Nutritional Premix Market even faster.

How does the United States fare in the world of infant nutritional premixes?

Over the forecast period, the United States will control over 36% of the global market, owing to the presence of important market players and a high consumption rate of baby nutritional products.

The cost of an infant automobile in the United States has risen dramatically in recent years. The average monthly cost of providing center-based child care for an infant is USD 1,230 compared to USD 800 for a family child care home. The cost of child care for a newborn consumes 18 percent of a household's income on average.

Why is Infant Nutritional Premix Industry in China so appealing?

In 2015, China's one-child policy was replaced with a two-child policy, with 17.5 million births recorded that year. This surge has had a significant impact on the baby food business, particularly on infant milk formula.

Children account for 1/3 of urban household expenditure in China, according to the National Bureau of Statistics. The majority of this money was spent on day-to-day baby feeding and meals for little children. RTD food items are becoming increasingly popular among Chinese parents since they are handy and can be tailored to their hectic schedules.

The newborn nutritional premixes market in China is being fueled by the aforementioned elements, as well as a rising desire for homemade, fresh, organic baby food. According to FMI, between 2022 and 2032, the market would increase at a CAGR of roughly 10%.

How are Vitamin-Based Infant Products Helping to Drive Market Growth?

According to FMI, vitamin-based newborn nutritional premix accounted for about a third of the market share among all ingredients in 2020, and is predicted to expand at a rate of over 5% over the next decade.

The increased focus of parents on providing a nutritious meal for their children's health resulted in a demand for vitamin-based goods. To earn consumer trust, well-known brands such as Nestle-Ceregrow are meeting demand by introducing nutritious ingredients, such as essential vitamins for newborn newborns. Thickening and Binding Application is Boosting the Application Segment.

Powdered infant nutritional premixes accounted for the highest revenue share in 2021, and it is expected to continue on a favorable development trajectory with a CAGR of almost 6% over the forecast period.

The demand for powdered nutritious premixes is increasing dramatically in both developed countries and developing countries. This is due to the unique characteristics of powdered goods, such as their ease of water solubility.

The nutritional premixes market has seen a significant transition from liquid to powder form in recent years, owing to numerous benefits such as increased durability and simplicity.

Leading players are adopting novel strategies such as ground-breaking marketing tactics, the opening of new retail outlets, technical developments, and mergers and acquisitions.

How much is the Infant Nutritional Premix Market current worth?

Infant Nutritional Premix Market consumption is expected to grow at a CAGR of around 6.1% during the period 2021-2031.

In terms of revenue, Infant Nutritional Premix Market grew at a CAGR of around 4.0% during 2017-2021

Vendors are adding delightful flavours and healthful components to their infant goods in order to boost sales and make them easier to consume. The majority of them are available in a powdered form that is readily mixed with water, grabbing the attention of parents in developing countries like China, India, and Japan.

The top 5 producers of Infant Nutritional Premix Market hold around 25-30% of the market share.

Which are the major countries driving demand for Infant Nutritional Premix Market?

The US, and China are the major countries driving demand for Infant Nutritional Premix Market.

Who are the major players in Infant Nutritional Premix Market?

What outlook does North America provide?

At what rate will the U.S. Infant Nutritional Premix Market grow?

US Infant Nutritional Premix Market is projected to grow at a CAGR of around x.x% over the next ten years.