Future Market Insights (FMI) has pegged the infant formula market value to reach US$ 38.8 Bn in 2021. Driven by rising demand for organic baby food, sales are poised to increase at an impressive CAGR of 10.60% through 2026.

FMI also has forecast the infant formula sales to register an impressive 9.90% year-on-year growth in 2021 owing to the increasing demand for eco-friendly packaging and organic baby food.

As per the FMI analysis, Nestle SA, Groupe Danone, The Kraft Heinz Company, Friesland Campina, and Abbott Nutrition are the leading market players. They contribute nearly 60% of revenue share in the global infant formula market. 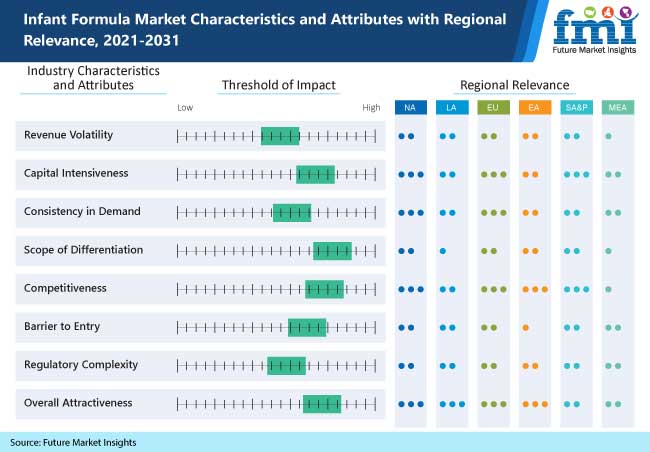 Strong growth is on the cards for global infant formula market on account of the rising demand for organic baby food across the globe for children under the age of five. Increasing cases of malnutrition among children and infants have propelled the need for infant formula.

Rising number of working mothers worldwide has encouraged the baby food companies to introduce nutrition-rich supplement facilitating the need for convenient feeding. Alongside this, companies are adopting eco-friendly ways for packaging material which have heightened the growth prospects for key players.

Key players including Nestle SA, Danone, and Abbott Nutrition are working towards developing animal-free baby food that contains same nutrients as mother’s milk. Cases of stunted growth, malnutrition, and rising number of women not able to lactate have accelerated the demand.

Favorable government initiatives, especially across China, India, and the U.S., have improved the adoption of infant formula. Consumers now conscious regarding the ingredients and label of content have compelled the companies to come up with clean-label manufacturing.

These factors are driving the adoption of organic baby food across the globe. Consistent need and awareness regarding the additional nutrition in a toddlers’ diet have encouraged the parents to invest in baby food supplements.

As per Future Market Insights (FMI), the global infant formula market is poised to expand at an impressive CAGR of 10.60% in the next five years. The market also is projected to reach a valuation of US$ 38.8 Bn in 2021.

Rising awareness about factors influencing infants’ health and the importance of micronutrients in promoting growth are encouraging market players to introduce animal-free and organic products.

Consumers are becoming more conscious about their purchasing decisions with regards to infant formula, with increasing curiosity about the use of various ingredients in these products.

In order to meet with the rise in parents’ consciousness while choosing an infant formula, prominent market players are focusing on the launch of organic ingredients and hypo anti allergic baby food. These products are manufactured exclusively using plant-based and organic ingredients.

Industry giants such as Nestle, Abbott Nutrition, and Danone are incessantly focusing on innovative ingredients to incorporated specific health benefits in infant formula. Players are focusing on manufacturing formula enriched with vitamins and nutrition almost similar to mother’s milk.

With increasing sales of organic infant formula, global infant formula market demand is estimated to bolster exponentially over the forecast period across the globe.

Breastfeeding is still considered to the preferred way to feed a child across many countries. It has been recognized a standard for good parenting since a long time. In some rural regions of Africa and India, there are still people not accepting the modern ways.

Underlying social stigma regarding the adoption of infant formula might hamper the growth in developing economies. Survey by Institute for the Advancement of Breastfeeding & lactation Education shows that women in the U.S. who chose to feed infant formula instead of breastfeeding suffered from emotional turmoil.

This can affect the growth of infant formula negatively over the coming years. However, increasing initiatives from private and public platforms to encourage the use of infant formula for healthy development of child is likely to negate the negative impact.

How Will China Retain the Dominance of Leading Infant Market?

Growth of infant formula market across China is attributable to the expansion of online pharmacy and retail stores. Increasing demand for organic baby food and rising awareness regarding the health of new-borns have propelled the adoption.

With rise in number of women joining the workforce, need for convenient feeding with rich nutrition will amplify the sales of infant formulas over the coming years. Over the past few years, number of working women across China have substantially increased to provide support to the family.

Hence, this factor is playing a major role in driving the sales of infant formulas. As per FMI, China is anticipated to contribute nearly 90% of revenue share in Asia Pacific excluding Japan (APEJ) region.

While the consumer perception about the importance of infant formula in toddlers’ health remains significantly positive, demand is estimated to bolster across China.

Sales of infant formula are anticipated to rise with expansion of retail sector. With consumers now turning to online pharmacy and retail stores for the purchase of baby food, sales have increased.

How is the Demand for Infant Formulas Faring in India?

Issues concerning malnutrition and undernutrition among children under the age of five have increased with urbanization in the country. Now, with increasing number of mothers joining the workforce and corporate lifestyle have accelerated the need for convenient feeding with all the nutrition same as human milk.

Alongside this, rising cases of malnutrition children under the age of 5 have also prompted the adoption of infant formula across India. Child malnutrition is a chronic and longstanding issue in India.

The rate of child malnutrition is still alarming in India. As per the statistics of Global Hunger Index-2020, which is basically recorded on the basis of malnourished, stunted, and underdeveloped children, India ranks on the 94th place among 107 countries.

Down To Earth Organization recorded at least 8 out of 342 surveyed districts in India have more than 50% prevalence of child stunting below the age of 5 in 2020.

From the 22 districts surveyed in 2021, percentage of stunted, wasted, and malnourished children increased or remain unchanged from 2017, which accounted for 68.2%.

Due to increasing burden of child mortality and stunted ratio, India launched few policies to curb the number of malnourished children in the country. Initiatives such as POSHAN Abhiyaan aims to curb malnutrition among children by providing intensified health & nutrition services for the first 1000 days through real-time monitoring.

Through this initiative the government encouraged the adoption of infant formula for the mothers not able to lactate. In its latest survey of POSHAN JAN ANDOLAN, from October 2020 to March 2021, around 7,315,163 children under the age of 5 were provided with all policy benefits.

Hence, with rising favourable initiatives adoption of infant formula will increase over the coming years. Rising demand for eco-friendly packaging and need for organic baby food will also propel the growth across India.

Future Market Insights estimates, India will be one of the most lucrative market across Asia Pacific excluding Japan during the forecast period.

What are the Factors Fueling Demand for Infant Formula in France and Germany?

Increasing penetration of online pharmacy and retail stores are facilitating the rising demand of infant baby formula across the country. Rising number of working mothers in Germany and France are contributing to the increasing manufacturing of infant formula.

For instance, leading player Danone opened an infant formula processing plant in Germany that is processing around 90,000 tonnes of formula to be exported to 70 countries across the globe.

Based on these aforementioned factors, Eastern Europe infant formula market is poised to expand at a positive rate over the forecast period.

Why is Demand for Infant Formula Rising in the U.S.?

Rising demand for organic infant formula have increased the manufacturing among leading players, facilitating the increasing demand across the country. Rise in number of women participation in work force and need of high nutritional content in baby food is aiding the growth.

Emergence of new players have aided the market growth through new product launches. For instance, in June 2021, ByHeart, a new infant formula U.S. based company announced the completion of its largest infant formula clinical trial and is on the track to become 4th fully integrated FDA-registered, U.S. based infant formula brand in the country.

Presence of rising per capita healthcare expenditure and increasing number of working mothers have propelled the need for infant formula in the country. Percentage of working women in the U.S. is quite high and will continue to rise over the next decade.

As per Catalyst Organization-2019 report, 57.4% of women participate in the labor force as compared to 69% of men. Around 75,978,000 women were estimated under working force and is expected to continue to rise over the coming years.

Why is Demand for Starting Milk Formula High?

Starting milk formula is recommended for the infants with lactose intolerance or need extra supplement and nutrition. With increasing cases of malnutrition among 0-6 old month babies have furthered the adoption of starting milk infant formula.

Only 44% of 0-6 month old infants receive proper breast feeding across the globe. Hence, governments have launched several initiatives, especially in the developing economies, to provide additional nutrition to these babies.

Rising urbanization and increasing disposable income combined with growing awareness about the early nutritional value in infant have encouraged parents to look for supplements that improves the baby’s health.

Subsequently, leading companies are coming up with innovative products that are enriched with such nutrients, especially for new-born babies in need for intensive care. For instance, Abbott Nutrition, in November 2020, introduced its first infant formula, Similac Pro-Advance.

The product was a big hit in Canada due to its key ingredient 2'-Fucosyllactose Oligosaccharide, which is beneficial for the babies 0-6 month old.

Among various types of infant formulas, starting milk formula will continue to remain significant over the coming years, estimates Future Market Insights. The segment is anticipated to hold over 50% of global market share during the forecast period.

How are Online Stores Contributing Towards Infant Formula Sales?

In terms of distribution channel, Future Market Insights have segmented the market into specialty outlets, supermarkets, online stores, pharmacy stores, and others.

With the emergence of e-commerce, manufacturers are completing alliances with online pharmacyies and retail stores. Unprecedented outbreak of COVID-19 normalized dietary and nutritional supplements shopping through online stores.

As the world witnessed global shutdowns, supply chains diverted their businesses through e-commerce to maintain their foothold in the industry and curb the losses. As a result, online stores are anticipated to gain traction through 2021 & beyond.

As per Future Market Insights, pharmacy stores held over 3/4th of global market shares in 2020, followed by supermarkets. However, with the pandemic, as consumers and store dealers faced global lockdown, market supply was dealt through online platforms.

Due to global reach through online distribution channel, dealers as well as suppliers witnessed increased profit and sustained the global supply-demand chain. Hence, online stores segment is expected to grow at an astounding CAGR during the forecast period.

Currently, dominance of emerging Chinese group of companies has led to severe competition and consolidation of the market. Joint ventures with western market leaders is the primary strategy of these emerging players to take over the lead position in the industry.

Portfolio expansion is another one of the key strategies adopted by key players to strengthen their foothold in the industry. Focus on packaging and new launches will aid the revenue generation.