Insect protein usage has been increasing in the food & beverage market, owing to a growing need for protein alternatives among food & beverage makers to meet rising consumer demand. Furthermore, the consumption of animal products such as meat, eggs, and milk continues to climb as a result of high population growth, making environmental sustainability a concern. Due to its high protein content, beneficial fats, minerals, and vitamins, around 2,000 bug species are already consumed as part of a regular diet by humans and domestic animals all over the world.

Food makers have taken advantage of this opportunity to enter the market and develop a variety of goods, including protein bars, snacks, whey protein, mealworm cookies, cricket pasta, honey caterpillar croquettes, mixed insect nibbles, and chocolates based on insects.

The Incredible Growth of the Insect Protein Market

The insect protein market is estimated to be USD 349.2 Mn in 2022, because of the extraordinary bioavailability of protein and minerals in edible insects such as beetles and caterpillars. Insect protein makers are benefiting from rising health and environmental concern and about the consumption of traditional animal protein sources.

From 2022 to 2032, the worldwide insect protein market is predicted to increase at a staggering 9.2% CAGR. This expansion might be ascribed to the rapid acceptance of the technology by both manufacturers and consumers. The key drivers of growth in the edible insect protein industry are cost benefits, production efficiency, and nutritional value supplied by insects. 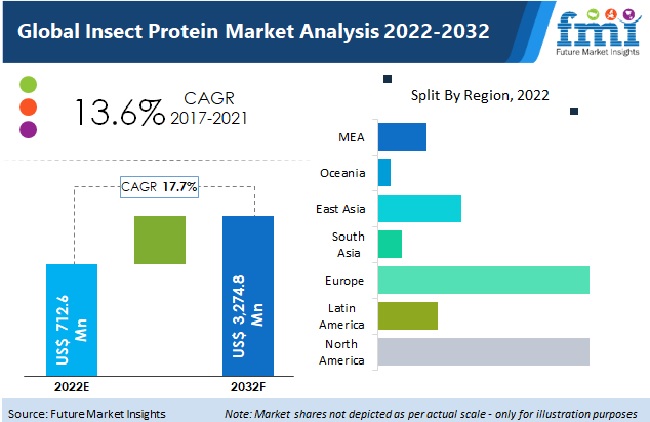 Beetles account for more than a quarter of the market, followed by Caterpillars, which have a remarkable double-digit growth rate of more than 10.2%. The nutritional benefits and high availability of these edible insects are driving growth in these categories.

Grasshoppers, crickets, and locusts all have high double-digit CAGRs, making them the most profitable bug varieties. Researchers are using locusts and grasshoppers to create infant food and animal feed for fish and chicken. This section will assist manufacturers in expanding their product portfolio and gaining a competitive advantage as early adopters.

Europe and North America are Paving the Way for Widespread Adoption

Europe and North America account for more than three-fifths of the global insect protein market. Insect protein products developed by budding start-ups companies such as Eat Grub and Aspire Group are finding popularity with consumers. This growth can be due to growing consumer knowledge of the negative environmental effects of animal agriculture. In these industrialised regions, insect protein presents a viable alternative to the information-savvy consumer sector.

The food and agriculture organization (FAO) has begun to promote edible insects as acceptable dietary options for humans, which has sparked a surge in interest in edible insects. With government funding and successful research endeavours, the Korean edible-insect market (particularly for human consumption) has made significant growth. Moreover, an increase in accessibility to edible insects is to develop insect-based ingredients instead of final food products showing their original appearance.

Latin America and the Middle East and Africa (MEA), despite their low market share, are predicted to increase at double-digit rates during the forecast period. Manufacturers are developing new ways to use insect protein to help those who are malnourished. To compensate for the dearth of nutritional resources in MEA nations such as Kenya, researchers are developing food items based on insect protein powder.

Beef contains only 29% protein, whereas crickets contain 69% of protein. A prominent trend driving this industry is the nutritional value difference between insect protein and traditional protein powder. Insect farming for protein extraction uses 8 to 10 times less land, up to 5 times less water, and generates 6 to 12 times fewer greenhouse gases in terms of production.

Furthermore, increased worldwide awareness of animal farming and its negative consequences is prompting businesses to seek alternatives. Many necessary amino acids, fatty acids, minerals, and vitamins can be found in insects. The widespread acceptance of insect protein among manufacturers and customers is due to its medical and production benefits.

Insect protein has a wide range of applications in animal nutrition, which is driving demand. Aquatic species, pets, and poultry animals consume it as a food source. The fast adoption of insect protein in other industries, including food and beverage, is fueled by its global acceptance of insect protein.

Amid growing global concerns about the environmental impact of traditional animal production, food and beverage producers are seeking alternatives to environmentally sustainable sources of protein. To take advantage of this potential, manufacturers must act quickly and build thorough strategies.

The Market Trend Followed by Companies:

For the companies, rising prices and accessibility of insect protein-based products have been major issues. Many start-ups have primarily sold insect-based protein products through online channels.

Many companies have begun partnering with major retailers and other convenience stores to raise knowledge of the benefits of insect protein and to boost the exposure of insect protein-based goods for instance:

Eat Grub collaboration with SOK: UK based company named Eat Grub being a large manufacturer of insect protein is collaborating with SOK which is a Finland based largest Supermarket chain.

EnviroFlight LLC: The Company opened its 1st manufacturing facility in the US and is expected to increase the production facility of the company in the insect protein extraction from Black soldier flies.

How much is the current worth of the insect protein market?

Currently insect protein market is worth more than USD 349.2 Mn.

Insect protein market consumption is expected to grow at a CAGR of around 9.2% during the period 2022-2032.

What is the demand outlook forecast for the insect protein market?

The global insect protein market is forecasted to surpass USD 838.5 Mn by the end of 2032.

Who are the top 5 players operating in the market?

Which are the major countries driving demand for insect protein?

The Asia Pacific, the U.S., and Europe are the major countries driving demand for Insect Protein.

What outlook does Europe provide?

Europe holds around 27.4% of the total insect protein revenue share in 2022.

At what rate will the U.S. insect protein market grow?

The U.S. Insect Protein market is projected to grow at a CAGR of around 7.3% over the next ten years.