The 'buzz' in society surrounding insects has led in the debut of insect-based pet food products in the pet food market, with more in the works. Giving pets a complete and balanced food that is appropriate for their species and life stage is the most important component in feeding them.

The increasing number of pet owners is the key driver of the insect-based pet food market. Furthermore, rising pet ownership is a major driver of nondiscretionary and discretionary goods demand, including toys, treats, and other food items.

Pet ownership is higher among millennials, the elderly, and single-person households. The market for insect-based pet food is being driven by the rising adoption of cats and dogs as family companions.

Insect proteins and lipids (fats) can also contribute to healthy, pleasant, and environmentally sustainable goods. While there are many other types of pet food to pick from, insect-based pet foods are an excellent option for owners who want to feed their pets a diet that isn't based on standard livestock species. As per FMI, the market is predicted to grow at a CAGR of 9.3% between 2021 and 2031. 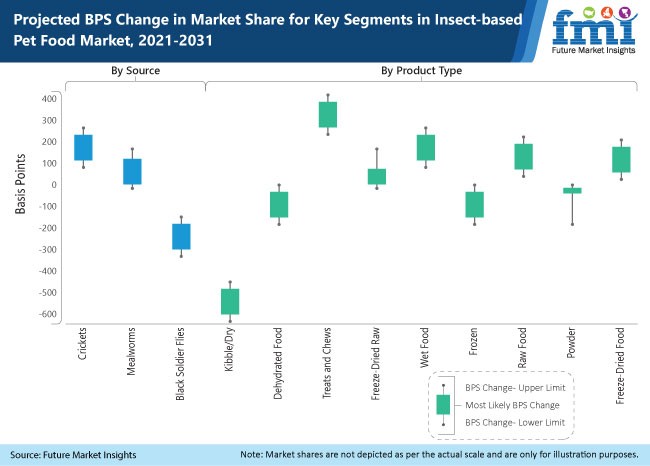 Growing media attention, as well as campaigns by farmers, academics, professional groups (such as the BVA), and pet food producers, are helping to raise acceptance of insect-based products among pet experts and owners. Although additional research is needed, there is already significant proof of the benefits of incorporating insects in pet food, which presents manufacturers with plenty of opportunities in the future.

Insect protein appears to be in the news on a frequent basis, not only for pet food but also for human and other species' meals. In January 2021, the Definition Committee of the Association of American Feed Control Officials (AAFCO Component) authorized black soldier fly larvae (BSFL) for use in adult maintenance adult dog food and treats, giving the ingredient tacit FDA approval.

Several dog treats including insects as a protein source have been on the market for several years in the European Union, where approval of insects as pet food ingredients has moved more quickly.

Nestle and Mars, for example, have recently entered the industry, with the former launching a Beyond Nature's Protein product in Switzerland in November 2020, which incorporates BSFL as one of its protein sources. Mars announced their own entrant, Lovebug, in the UK in April 2021, which also uses BSFL.

Grain-free pet food is becoming increasingly popular due to health concerns such as skin irritation, excessive gas, loose faces, and different infections of the ears and skin. Grain-free pet food promotes a healthy, lustrous coat and soft, supple skin, as well as improved digestion and immunity.

Food sensitivities and allergies can cause health problems and discomfort in pets, and many pet owners are unaware that their pets have allergies. Also, manufacturers such as Netlaa b.v. has launched a specially formulated, complete hypoallergenic dietary food for dogs with symptoms of food hypersensitivity. Thus, the grain-free insect-based pet food business is being driven by pet parents who are increasingly more concerned about their pets' health.

How is Rise in demand for Insect Protein Supporting US Insect-based Pet Food Market Growth?

The U.S. insect-based pet food market is projected to register growth at a CAGR of 7.1%. As the number of pet owners grows, so will the demand for insect-based pet food. Suppertime is the most enjoyable time for pets, and every pet owner strives to prepare a nutritious, flavorful dinner for their dogs. Social comfort, security, company, and the aesthetic sense supplied by pet animals are all important reasons in persuading them to raise pets.

A number of companies are working on inventing new flavor for their products. Pet foods are mostly made out of wheat grains, corn, and soy, which are blended with animal fats to give them a meaty flavor. Additionally, there are just a few pet foods that contain insect proteins on the market, but as people seek a lower-impact, more sustainable, and less expensive source of pet nutrition, this market is likely to expand.

For instance, in 2020, Scout & Zoe’s, a US pet food and treat brand, launched its latest product line, super fly for dogs. These are the company’s first insect-based products and include a whole-larvae treat, a dry powdered larvae meal topper, and a dried black soldier fly larvae jerky treat.

According to FMI’s analysis, the China insect-based pet food market is forecast to grow at a CAGR of 12.5%. Due to changes in people's lifestyles, pet humanization is on the rise in China. Social networking and the embrace of the western lifestyle have affected the rise in pet ownership among younger generations in particular.

The majority of people in China who keep pet dogs or cats, according to the National Bureau of Statistics of China (NBS China), are elderly. Approximately 61% of people aged 65 and up have a pet. Instead of proper babysitting commitments, the elderly choose little, easy-to-care-for pets. These reasons are propelling the country's pet food market, which presents new chances for market players in the insect-based pet food market.

The country's urbanization trend has a stronger impact on pet food sales, particularly insect-based pet food, because these products are more convenient and fit for city inhabitants' busy lifestyles. As a result, China's insect-based pet food market is booming, thanks to growing pet nutrition expenses and an expanding pet population.

How is Livestock, Climate and Culinary Changes Driving Insect-based Pet Food Market in Germany and UK

According to FMI’s analysis, Germany and the UK both a market of more than 35% of European market and forecast to grow at a CAGR of 7.3% and 5.9% respectively. Despite some experts' concerns about the many unknowns related with mass-scale insect farming, insects are already becoming a popular trend in sustainable pet foods in Europe.

Insect farming has several advantages over cattle agriculture, according to a 2017 Dutch review study: it requires less land and water, emits less greenhouse gases, and has excellent feed conversion efficiencies.

According to a study published in 2020 by researchers in the UK and Germany, the effects of pet food "are equivalent to an environmental footprint of around twice the UK land area, and would make pet food emissions around the 60th highest emitting country, or equivalent to total emissions from countries such as Mozambique or the Philippines."

Thus, the sustainability in production, climate and culinary changes is driving the demand for insect-based pet food in Germany and UK.

According to FMI’s analysis, the India insect-based pet food market is forecast to grow at a CAGR of 10.8%. The global insect-based pet food industry has a lot of room for expansion, especially in rising economies like India, which are increasingly becoming opportunity hotbeds for a variety of global markets.

Thanks to a dramatic increase in the number of pet owners, a high rate of population growth, and increased disposable incomes leading to a rise in the basic standards of living, emerging markets offer greater potential for manufacturers to address pet owners' dietary shifts toward high-value products while catering to local needs and tastes.

Also, improved Source to manufacture quality pet food, innovation in processes and advanced transportation facility to reach out the international customers are the different factors aids to reduce the cost of product, and hence the price of cat food may reduce further in the Indian market

Geographic expansion is no longer a secondary business strategy for manufacturers in the global insect-based pet food value chain because it opens up a flood of new potential opportunities. Insect-based pet food companies are employing sophisticated go-to-market methods such as collaborations, partnerships, M&A, and divestitures, in addition to focusing on organic growth.

Why is Demand for Organic Insect-based Pet Food High?

Artificial colors, preservatives, and tastes, as well as synthetic hormones, toxic pesticides, and antibiotics, are all banned in pet food. To capitalize on the current market trend, manufacturers are creating a variety of pet food brands with a wide range of organic products.

Why is Demand for BSF Based Protein High in Insect-based Pet Food Market?

Black soldier flies (BSF) as a source is expected to register healthy growth at 9.7% CAGR and is expected to hold a market share of more than 35% in 2021.

Protein-rich insects like BSF have a lot of potential in animal nutrition. Certain insect components have been proven to have amino acid profiles that are comparable to meat and fishmeal. There is a lot of interest in using insects in meals for pets who have food intolerance or allergies because of their novel protein composition. Insects can also have high levels of fats/oils, minerals, and vitamins, depending on what they eat.

Consumption of Insect-based Pet Food is more by Dogs

Among pet type, consumption in dogs segment is expected to register healthy growth at 8.4% CAGR. The segment also is expected to hold a market share of more than 44.5% in 2021.

Dogs are one of the most adopted domestic animals on the planet. They are also regarded as one of the friendliest pets available. They're often referred to as man's best friends because they freely offer their companionship and company to others. The demand for insect-based pet food is increasing in response to the growing dog population.

Purchasing pet food online gives users access to a large selection of products. A product can be simply distributed to customers with the help of e-commerce. Manufacturers of insect-based pet food should bear this in mind as they develop their global company through e-commerce.

Chewy has been devouring the competition since 2012 and has established itself as one of the most dependable sources of pet food. Chewy has developed a particular position in the internet market with its outstanding customer service methods, thorough product information, and instructive yet funny advertising videos.

Several other pet food brands are joining the bandwagon, which is expected to position online retailing as a fast growing sales channel in the inset-based pet food market.

The main reasons behind the growing popularity of insect-based pet food is focus on sustainability. First in the sense of being able to supply sustainable sources of food, particularly proteins, for pets and humans as world populations and protein demand grow in lockstep.

In terms of overall sustainability, including environmental impact, insect farming has been found to consume significantly less land, water, and, to a lesser extent, energy, as well as produce significantly less waste, than traditional livestock production.

In fact, insect faeces, commonly known as frass, is becoming a feasible product for converting to biogas, while insects grown for protein are frequently fed waste by-products from human food and other production streams.

As the concept of a 'carbon pawprint' is tested alongside the carbon footprint of climate-conscious consumers, Mars and Nestle pet food businesses have recently begun marketing dog and cat food containing insect protein.