PET stretch blow molding machines are mostly used to produce bottles. The method is commonly categorised into two categories i.e. single stage and two-step process. The single stage method used includes a rapid cooling preform mold and reheat preform before placing it into the container mold; after reheating the preform is stretched and blown to fit into the mold. Whereas, two step PET stretch blow molding machine follows the same process in two stages.

These technologies of PET stretch blow molding machines are used in various industries. The containers produced are used widely. The global PET stretch blow molding machines market is dominated by the beverage industry as it is expected to reach a market value of over US$ 260 Mn by the end of 2027. The beverage industry is anticipated to grow at a CAGR of 2.1% during the forecast period. However, the personal care and cosmetics industry is projected to be the most attractive end use segment with the highest growth rate of 2.4% during the forecast period. 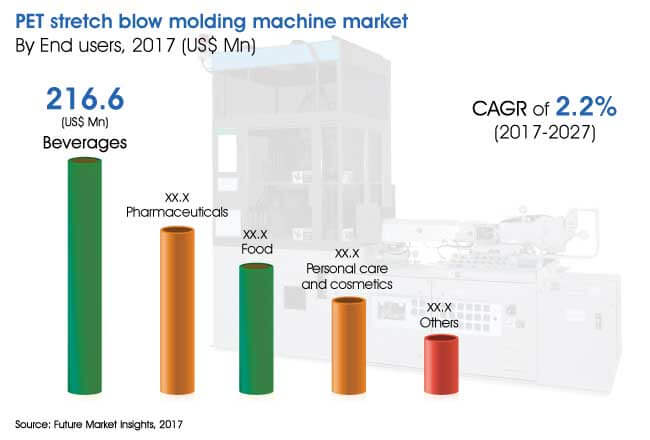 PET stretch blow molding machines are largely used in the production of bottles and thus it witnesses highest demand from the beverage industry. However, lately the demand for soft drinks has decreased exceptionally due to growing health concerns among people. Consumers are more inclined towards healthy eating habits and thus, instead of soft drinks, the demand for bottled water has increased especially in the U.S. The lack of access to potable water is also an issue in various regions. Countries such as Costa Rica and Mexico in Latin America are facing water crisis.

There is a high cost associated with PET stretch blow molding machines, commonly costing over US$ 100,000 and are manufactured to produce large volume outputs in a single run. PET stretch blow molding machines can manufacture at least 15,000 bottles per hour. These machines can prove to be economical for big manufacturers who require large scale production. But this creates a barrier for other rural industries. If these machines are forced to manufacture small volume outputs, manufacturers won’t be able to fetch adequate profit, as they consume the same amount of energy in a single run irrespective of the volume of output.

Small scale industries in rural regions do not have the requirement of such high volumes of product. This repels small scale manufacturers from entering the market. The market may also witness increasing preference of manufacturers towards flexible packaging or bio based products. The use of tin cans, glass bottles and cartons for packaging of both carbonated and non-carbonated drinks may limit revenue growth in the PET stretch blow molding machines market.