The market was pegged at 458,000 metric tonnes in 2015 and it is expected to cross 720,816 metric tonnes by the end of the forecast period. Many regions across the globe suffer from water scarcity and water stress. For instance, MEA accounts for a mere 1% share in the available freshwater resources across the globe. There is a surging demand for water treatment chemicals in the MEA region and this in turn is expected to drive the growth of the global ion exchange resins market.

Growing consumption of ion exchange resins, especially in some of the African countries, is expected to drive market growth during the forecast period. In terms of value, the MEA ion exchange resins market will expand at a CAGR of 5.9%. The region was estimated to be valued beyond US$ 90 Mn by the end of 2016 and it is expected to touch more than US$ 150 Mn by the end of the forecast period.

This region will also create a robust incremental dollar opportunity within the period of assessment. MEA, Eastern Europe and Latin America are expected to grow at considerable CAGRs and can be called as emerging regions in the ion exchange resins market over the forecast period. Rest of MEA countries such as Turkey, Israel, and North African countries are expected to drive growth in the consumption of ion exchange resins in the region during the forecast period. 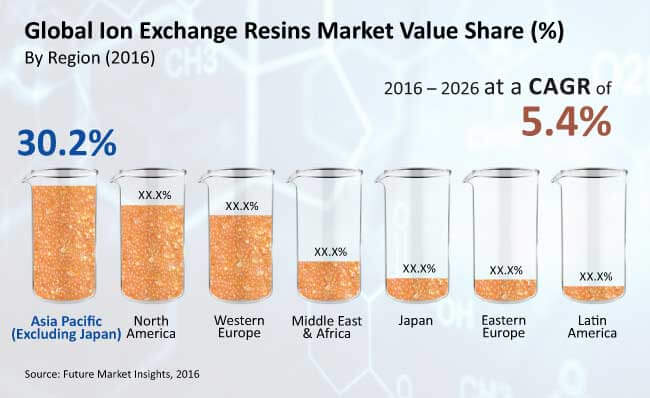 The report guides the reader through the major segments of the ion exchange resins market differentiated mainly on the basis of region, type of product and application. With effective data pertaining to each segment, well-evaluated insights including market size and market share analysis, year-over-year (Y-o-Y) growth rate, basis point share analysis, and absolute ($) opportunity for the respective period of assessment are also included.