The demand for surface finishing technologies and equipment and materials is growing significantly as a result of increasing industrialization. Surface finishing is used in almost every end-use industry using metals. This includes automotive, aerospace, construction, medical, jewellery, metal foundries, metal forming, and more.

Various metal parts utilized in automotive and aerospace industries require finishing along with periodic cleaning and refurbishment for efficient operation. Moreover, in the industrial sector, machine operators are focused on increasing reliability of parts and equipment, for which they use surface finishing technologies on a large scale.

Manufacturers are uploading such pertinent information on online platforms such as websites, enabling customers to check necessary information such as wet consumables, features and place orders with ease.

In the current era of competition and rising digitalization, several industries aim to improve productivity and reduce time and capital expenditure. For instance, manufacturing industries are inclined towards using more compatible materials and advanced technologies. Such trends are also witnessed in the surface finishing and mass finishing industry. Manufacturers strive to offer reliable and quality services in optimum time. 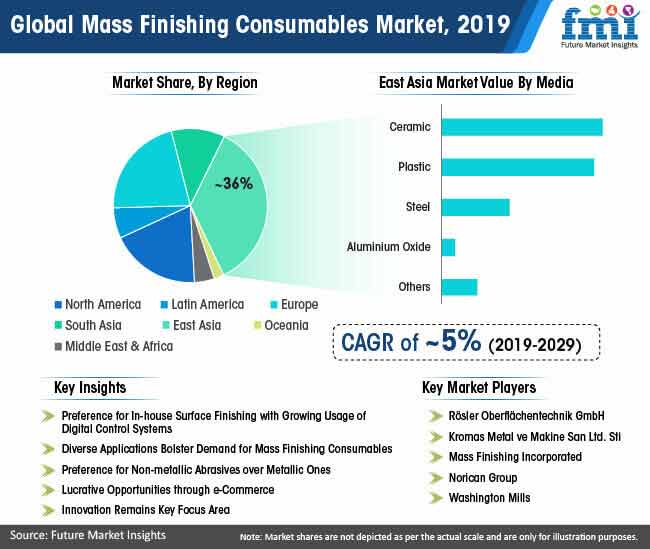 The global mass finishing consumables market has been growing at a steady pace. Although the booming manufacturing and industrial sectors are prime drivers, the market continues to face the challenges posed by trade conflicts and raw material pricing volatility. Projected for a promising CAGR over the course of forecast period (2019 - 2029), mass finishing consumables market revenues will reach the value of ~US$ 300 Mn towards 2029 end.

Non-metallic abrasives such as ceramic and plastic will maintain their supremacy through 2029 owing to their adoption for both wet and dry applications. These abrasives have been generating significant revenues in East Asian market. However, as ceramics is relatively inexpensive than plastic, ceramic will continue to hold a greater market share.

On the other hand, plastic is certain to face a declining market scenario in the near future due to sustainability concerns. Steel, despite having a significantly high recyclability quotient, will account for moderate adoption due to its higher price point.

East Asian market for mass finishing consumables is set to exceed the revenues worth ~US$ 100 Mn over the next decade. While China and Japan will continue to lead the market in East Asia owing to the flourishing aircraft and automotive production and automotive aftermarket scenario, the U.S. and Germany will continue to lead their way in North American and European markets that collectively account for over a third of market value. In terms of revenue generation, North America will soon catch up Europe.

Conventional methods of hiring service providers for surface finishing applications is a time- and cost-prohibitive process. Manufacturers are thus offering machinery equipped with digital control systems to allow users to efficiently perform finishing process for small as well as large components. In addition, the digitally-enabled machinery deliver optimum as a result of which, customers are increasingly shifting towards in-house surface finishing.