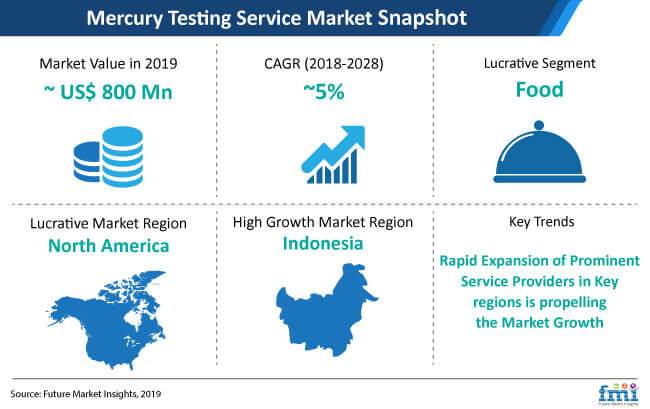 Prominent mercury service providers are constantly focusing on key regions, such as North America, Europe, and emerging countries, to capture a considerable market share. Rapid growth in industries such as healthcare, food, and agriculture in these regions frequently require mercury testing services, which is ultimately creating opportunities for mercury testing service providers to generate maximum revenue.

The determination of mercury in pharmaceutical products is one of the serious concerns across the globe. The consumption or daily dose of such pharmaceutical products can have harmful effects on the human body. The excessive content of mercury in human body can be determined by the blood, urine, and hair test. The increasing demand for mercury testing in the pharmaceutical and healthcare industries to determine the mercury level is another major factor boosting the mercury testing service market.

Healthy growth is expected in developing countries, especially China, India, and Mexico for mercury testing service market. Among the emerging countries, China and India are estimated to witness significant growth in the food and healthcare industry. Stringent rules and regulations related to food testing in these countries ultimately creates the demand for mercury testing and analysis.

These factors are expected to fuel the growth of the mercury testing service market. Key mercury service providers are constantly focusing on countries like India and China. Increasing demand for mercury testing services in these countries, especially in industries such as food, healthcare, and agriculture Industries, is propelling the market growth considerably. 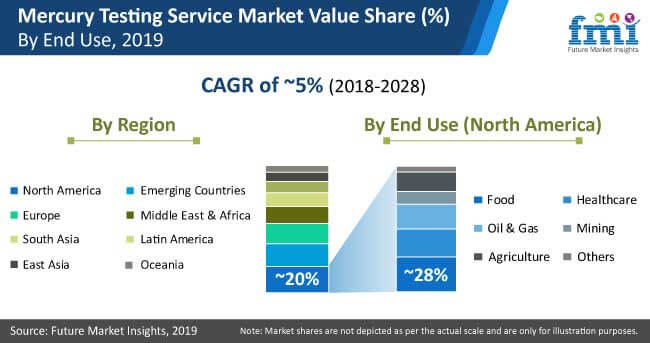 Mercury toxicity continues to represent a significant health concern. Given that humans get widely exposed to chronic levels of mercurial compounds from dental amalgams, vaccines and through fish, the need for sensitive and refined testing to access and limit vulnerability to adverse metal-mediated health risks continues to grow high.

Several regions have imposed stringent regulations to curb the growing menace of mercury emission and its rising palpability in a range of daily use products. With rapid concerns around the toxic impact of heavy metals in a span of products across diverse industries, food industry in particular, the testing of these metals is constantly appearing on the radar of regulators and industries, alike.

Eco-impacts of mercury have emerged as a havoc to the health and safety of natural environment owing to its growing penetration into animal and human food chains, and thereby causing subsequent health risks. Intensifying focus on impeding the spread of mercury, which continues to put the environment on ventilator and deteriorates the quality of food products, has created a dire need for refined mercury testing services.

With humans increasingly getting exposed to the ubiquitous environmental pollutant Hg in varying amounts and chemical forms, mercury testing services that promise precise results are garnering unprecedented traction from different industries. In light of health adversity triggered by significant heavy metal exposure, mercury testing service providers have zoomed in their focus on leveraging advanced technology to leave no scope for errors.

Trace mercury analysis demands accurate and swift approach due to the wide variety and types of samples and growing industry expectations. Mercury testing and detection for an array of samples with high sample throughput using ICP-MS has emerged as an instrumental tool for service providers. Adoption of total mercury analysis and trace mercury analysis based on CV-AFS, ICP-AES/OES, and ICP-MS has spurred in line with growing concerns around mercury toxicity, thereby underpinning prospects for promising mercury reduction service providers.

The presence of a large number of prominent mercury testing service providers in North America continues to keep the market lucrativeness of this region intact; however, countries, such as India, Mexico, and China are highly likely to turn the tables around, in the near future. Substantial demand for mercury testing and analysis in the proliferating food industry, is fostering the market growth in these regions. Recognizing the future opportunistic avenues in fast growing regions, leading mercury testing service providers are acquiring and collaborating with regional companies to expand in the food safety and quality landscape, particularly in China.

The mercury testing service providers are highly likely to witness a stream of opportunities in the forthcoming years, in line with the growing industrial awareness about the impact of mercury exposure, and development of novel ways to conduct precise testing. Amid the growing competition in the marketplace, a large number of leading players maintain their strategic focus on expanding mercury testing capabilities in lucrative countries, while they focus on attaining a firmer global footprint.