On the basis of the grades of patchouli oil produced, the end use in which it is utilized is identified. The main use of patchouli oil is in perfumery and pharmaceuticals. It is also used in home care products and for aromatherapy. The latest trend of the use of cosmeceuticals and aromatherapy has increased the demand for pure patchouli oil.

Perfumery companies are offering sustainable growth prospects of the patchouli plant in Indonesia, and various benefits to the farmers growing it. This is due to the price volatility of patchouli oil, forcing farmers to shift to growing other crops.

The awareness about clean label products among the millennial population has steadily increased over the past several years. Consumers want to buy goods that they trust. This is the reason that the manufacturers of food and beverages as well as consumer products are shifting towards more organic and natural ingredients in the goods that they produce. The use of natural ingredients such as patchouli oil in products has increased the demand for essential oils in the global market.

These natural oils also have medicinal properties, which could be a benefit for manufacturers, as these properties could be included on the labels to increase the overall value of the product that they are manufacturing. This could allow manufacturers to experiment with the average pricing of the goods that include patchouli oil. 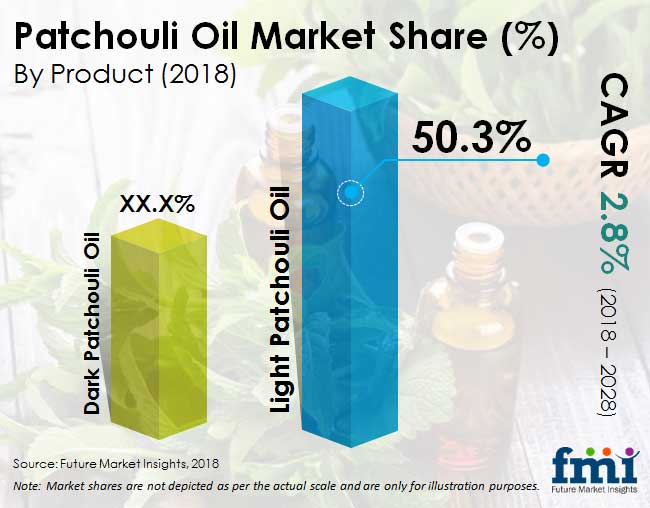 Eco-perfumes – A Trend That Has Become Mainstream

Natural ingredients are gently capturing the zeitgeist and gaining traction over synthetic molecules that have dominated for decades. The market has evolved into a greener age, where sustainable resources are vital ingredients, and is the new trend. Evolving into eco-perfumes, it is estimated that, the business has doubled in the last five years (2013 to 2018). A long time back, synthetic ingredients were added in perfumes to replace animal notes that were banished on grounds of cruelty or cost.

But the decrease in the use of synthetic perfumes and the use of natural ingredients in perfumes are back in trend. This has now become an increasingly global niche movement by the manufacturers themselves. This has led to the manufacturers using essential oils such as patchouli oil in perfumes that could increase the eco-perfume value. Also, patchouli oil is extracted from plants and not animals, and thus, there is no cruelty involved.

Patchouli oil is produced locally in regions such as Indonesia, India, China, Taiwan, Malaysia, etc., and there are very few global scale players in this market. The companies that produce patchouli oil are mostly present in the regions where it is cultivated, and are not present at a global level. They export the oil to the required companies via agents. This has led a few companies having a higher global share and very good profit margins by directly going into partnerships with these local companies that produce patchouli oil.

There are only selective companies such as Givaudan, Takasago International Corporation, and Ultra International B.V. that are present in this market with a joint partnership and a significant global presence. The opportunities for new players in the patchouli oil market is high, due to the increasing demand for essential oils from various industries.

Summary: Demand in the global patchouli oil market to surge in the coming years owing to growing awareness of clean label products. Manufacturers of F&B products fast shifting towards patchouli oil as a key ingredient in their formulations.