[160 pages report] The global oil and gas terminal automation market is forecast to register a CAGR of 7.1% in terms of value over the forecast period (2016-2026) driven primarily by relatively low oil prices and increasing demand for natural gas from a diverse set of industries.

Oil and gas terminals, often termed as oil and gas depots, tank farms or tank terminals, bulk terminals, facilitate storage of oil, gas and related products. These are thus, intermediate hubs which store and facilitate the distribution of oil and gas to end users. Oil & gas terminal automation systems are integrated solutions which facilitate easier monitoring and control of various product and bulk material handling operations, from receipt of products through storage and distribution. These systems comprise a set of integrated tools that enable access to real-time data, thus ensuring safety and efficient management of day-to-day terminal operations.

Growth in the demand for natural gas, supply-demand scenario and contango situation are expected to drive growth of global oil and gas terminal automation market during the forecast period

Relatively slower economic growth especially in oil consuming nations such as China, and crude oil supply glut experienced over the recent past have driven the global average crude oil prices southwards over the same period. The initial phase of the forecast period is thus expected to be characterized by a contango situation resulting in increasing emphasis on storage of oil across the globe. Moreover, increasing demand for natural gas, especially liquefied natural gas is expected to result in emergence of several new terminals in North America and Asia Pacific, among other regions. 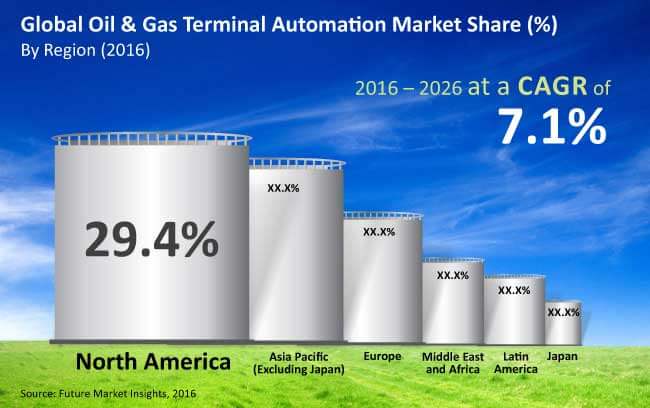 On the basis of categories, the global oil and gas terminal automation market is segmented into: