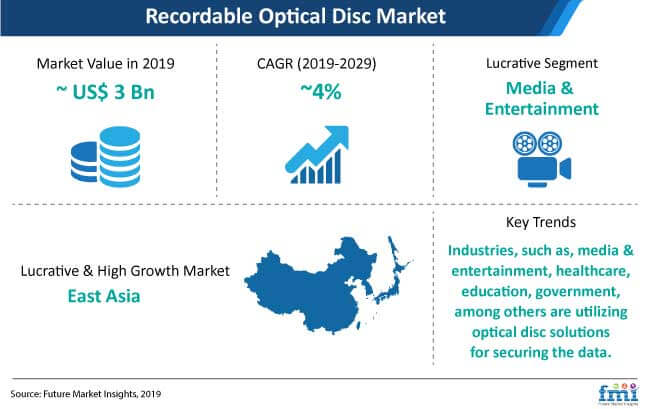 The emergence of new technologies, such as cloud storage, Internet of things (IoT), and Video on Demand, apart from easy access, portability, comprehensive flash drive and Hard Disc Drive (HDD), is impacting the growth of the recordable optical discs market. 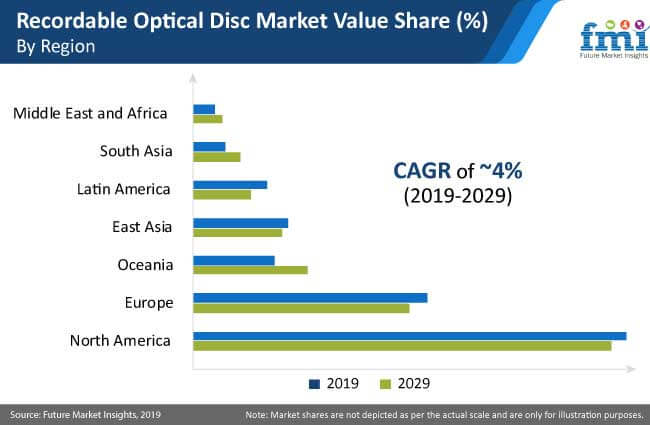 Recordable Optical Disc: Has the Favorite Relic Lost its Shine?

Passive Growth on the Cards through 2029

In the early days when data storage was mostly about megabytes and floppy drives were in vogue, recordable optical disc formats started owing their space. Hard drives were flying off the shelves as it eased storage of more data, but portability aroused as a key shortcoming.

CDs and DVDs turned up as two major breakthroughs, which brought high storage and portability into the table. Though the fad is currently facing headwinds, technologies like IOT are creating new grounds for the decent growth of recordable optical disc market.

As the transition toward non-physical media gained momentum, the value of physical media distribution systems witnessed a drastic erosion. Smartphones and tablets eventually took over CD and DVD players, given that consumers started enjoying umpteen benefits in terms of storage, accessibility, and usage.

Though sales of recordable optical disc for individual or personal applications are facing tough times, the reliance of professional units on sturdy disks for local data storage continues to be intact. Blu-ray formats still remain a preferred choice across software/IT firms and media industry, as quality and storage capacities of blu-ray discs have remained profound in comparison to other optical disc counterparts.

What does it mean for Market Players?

As recordable optical discs are losing shelves in consumer markets and seeing rapid obsolescence, emerging applications of archival storage are acting as a glimmer of hope to the dwindling scenario. Manufacturers are focusing on R&D activities to introduce advanced features that resonate with ever-evolving data requirements. Key players are also rolling out new holographic disc formats, given that holographic discs offer higher storage capacity over the conventional types.