Optical spectrum analyzer market is set to register growth at a positive pace between 2020 and 2030. While the unprecedented COVID-19 outbreak is currently posing threat, especially on account of decelerating demand from key end users such as the IT and telecommunication, aerospace, medical & healthcare, and others, growth for the most part will remain positive during the assessment period.

Future Market Insights (FMI) in a new study offers an unbiased analysis of the market highlighting challenges and uncovering hidden prospects across key regions, including North America, Latin America, Europe, and others.

The telecommunications sector is expected to hold the largest share in OSA market. Recent advancements in the industry have significantly fuelled the demand for optical spectrum analyzer. Optical spectrum analyzers are highly efficient in measuring and displaying the distribution of power of optical sources over specified wavelength spans.

The surging optics related applications, coupled with the rise in demand for wireless technologies, are spurring the growth of the market. Also, steered by the shift from conventional telecommunication infrastructure to fiber optic infrastructure, the market is set to witness high demand for fiber optic spectrum analyzer. According to FMI, lucrative prospects are on cards for the market especially since higher penetration of 5G in the future is set to increase the demand of OSA.

Optical spectrum analyzers are highly sought-after in the IT & telecommunication industry. Their application is especially high in manufacturing and on-field in order to ensure the quality of the optical devices and network. With rising digitization, the IT & telecommunication industry is expanding fast, which is projected to fuel the demand for optical spectrum analyzers in the near future.

With the advancement in medical & healthcare industry, it is being incorporated with cutting edge technologies and equipment, resulting in high demand for the optical spectrum analyzers around the world.

Optical spectrum analyzers are costly and require experts for proper installation and use. Also, they have a high maintenance cost, which often works as restraint to growth.

Additionally, optical spectrum analyzers have a few disadvantages such as swept type can detect only Continuous Wave or Continuous Waveforms (CW) signals without any phase informations, FFT is not capable of working in higher radio frequencies due to limitations in sampling rate of Analog to Digital Converter (ADC), and others. These drawbacks often curtail sales prospects for the market.

Furthermore, the outbreak of novel coronavirus has resulted in declining growth of the optical spectrum analyzer market due to various factors such as decrease in demand, indefinite shut down of various manufacturing hubs during lock down, financial constraints, and others.

Despite having difficulties due to the restraints, the market has high potential and is likely to exhibit steady growth over the assessment period.

North America is presently leading in the global market and is anticipated to remain at the top through the forecast period. The expansion of the IT & telecommunication industry, coupled with the presence of well-developed manufacturing units, is propelling the growth in North America. 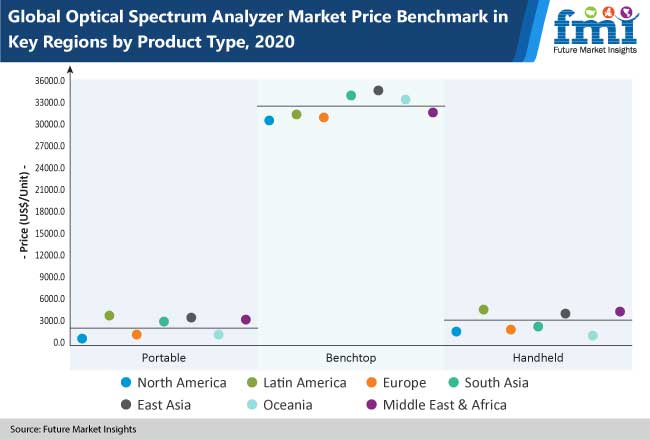 The growing adoption of 5G network connectivity is increasing the demand for optical spectrum analyzers in the region. The surging sales smartphones in cities such as the U.S, Canada, and others are bolstering the growth of the North America market.

According to FMI, the U.S is expected to emerge dominant during the forecast period spurring the growth of North America market.

East Asia is the second leading market for optical spectrum analyzers and is expected to exhibit steady growth in the near future. The presence of well-developed and high number of manufacturing units and increase in demand are driving the East Asia market.

Highly developed energy & utilities industry in countries such as China, Japan, North Korea, and others are propelling the growth of the East Asia market.

South Asia has emerged as a lucrative in optical spectrum analyzer market. The increasing usage of smartphones and 5G network services in the countries such as India, Nepal, Bhutan, and others is boosting the South Asia market.

India has registered the highest data usage (over 9.5 GB) per phone in the world which is expected to double in the coming years. Factors such as cheap data tariffs, expansion of product lines, and others are expected to drive the South Asia market.

Portable analyzers being highly preferred as test tool for nearly all forms of fiber and radio optic communication, are widely used by end users such as IT & telecommunication, medical & healthcare, and others.

Portable optical spectrum analyzers also are widely used for quantifying signal behavior by frequency and analyzing spectrum to create the visibility to unlock the potential of 5G wireless.

Wavelength meter mode is the dominating among mode types in the market and is expected to remain in the position throughout the forecast period.

Wavelength meter mode can precisely measure wavelengths on laser beams hence is witnessing high demand among the various end users starting from IT to semiconductor & electronics.

With the incorporation of advanced display and software features, this mode can work more efficiently in detecting and displaying wavelength, wave number, and optical frequency values. As a result this mode type is highly demanded in diverse applications such as medical devices testing, 5G network connectivity, and others all over the world.

the Key market players are emphasizing on the launching more advanced products in higher quantities to capitalize on existing opportunities in the market.

For instance, Finsar Corporation has launched their new WaveAnalyzer™ 1500S Optical Spectrum Analyzer which is a real-time, very-high-resolution optical spectrum analyzer for Research & Development (R&D) and production test applications in the current year.