Refrigeration oil market is majorly driven by growing demand in food and pharmaceutical industries, consumer appliances, low GWP refrigerants, etc. As the refrigeration oils have excellent tolerance towards high temperature, and therefore its increasing demand is enjoyed by the manufacturers. Although, the pandemic has resulted in decline of the market, developments going on and in 2020 have helped the market to remain moderate. Some latest developments by the manufacturers are presented below.

BITZER, refrigeration and air conditioning technology specialist at Chillventa eSpecial 2020 presented its Ammonia Compressor Packs for industrial refrigeration. The exceptional energy of ammonia and its excellent thermodynamic characteristics makes it capable for refrigeration in industries. With ammonia, there is no concern of environmental side effects such as global warming, air pollution or ozone depletion, etc. The company provides its customers with fully assembled and ready to use compressor units to make it easy for installation at the site.

An article published in 2020 at IOP Conference Series states, CuO-nano based Biodegradation oil can be utilised for energy conservation. The results demonstrate that addition of 0.3% of CuO can impact more than that of refrigeration oil blend samples. At 100 degree Celsius, the viscosity increased 18% and 22% for a CuO nanoparticle concentration in PE50 of 0.1% and 0.2% respectively. Less power consumption experienced due to CuO-nano based biodegradation oil helps in improving the compressor efficiency which leads to COP enhancement. The article reposts that power consumption of 0.3% CuO-nano biodegradable refrigeration oil is lower than that of all refrigeration oils.

Blue Star is setting up a new plant to strengthen its commercial refrigeration footprint as per the announcement in February 2021. The company is investing 1.3 billion rupees or 130 crore in Maharashtra, India to expand the facility in manufacturing of its deep freezers and storage water coolers. The new plant will help in meeting the rising demands for commercial refrigeration products. Blue Star is aiming to double its production capacity for deep freezers. The new palnt is being constructed on an area of around 19,300 sq. m and will be able t produce around 200,000 deep freezers and 100,000 storage water coolers per annum.

Changing food habits coupled with spending capacity have resulted in a number of licenced and franchised stores of limited service restaurants such as McDonald’s and Subway, KFC and local services and is driving demand for frozen and chilled food products. Moreover, storage of medical products (such as vaccines, other medical products, etc.) is expected to increase demand for refrigeration systems. Hence, it is expected to increase installation of refrigeration equipment in warehouses as well as in vehicles for distribution.

However, global warming potential of HFC is expected to drive the demand for natural refrigerants. Thus, others segment is estimated to dominate the market by the end of forecast period.

On the basis of the end user, the global refrigeration oil market is segmented into industrial, commercial and residential. Use of chillers, refrigerators, and air conditioners in pharmaceutical research laboratories, research & development department of food & beverage, fine chemical industries are expected to witness a significant growth of industrial segment over the forecast period. 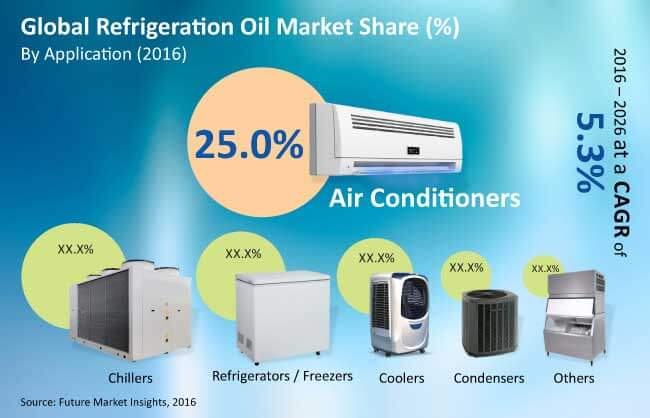 Revenue generated from sales of refrigeration oil in APEJ is set to register a CAGR of 5.7% during 2016–2026