Scope of the Silica for S-SBR Market Study

Precipitated silica is a form of synthetic amorphous silicon dioxide, derived from quartz sand (crystalline form of silicon dioxide). The injection of silica in the nano-pores of S-SBR causes interpenetration and maximum space/pore filling. This results in tight polymer-filler (silica) interlocking, leading to lower hysteresis and thus, rolling resistance. Silica for S-SBR is used in modern passenger car tires’ threads as reinforcing filler.

Silica is also widely used as a performance enhancing filler for tires, industrial goods and as a non-black reinforcing agent for footwear soles, especially athletic shoes. Sales revenue of Silica for S-SBR is expected to register a CAGR of 7.2% over the forecast period (2018-2028).

Silica for S-SBR is used as a reinforcing filler and as an efficient replacement to conventionally used carbon black. Growing regulations covering tire labelling will drive the demand for high-performance silica reinforced S-SBR tires. Over the past decade, synthetic rubber and fillers for automotive tires have changed significantly.

Many regions, owing to rising environmental concerns, have formed regulations, making tire labeling mandatory. For instance, since 2012, the EU has made it compulsory to label tires from A-E, based on three parameters, i.e. wet grip, noise and rolling resistance.

Japan, South Korea and China have also passed regulations for tire labelling, which has created upsurge in demand for Silica for S-SBR. Regulatory bodies are also giving incentives to manufacturers and consumers with preference for performance tires which use Silica for S-SBR. The use of high performance tires leads to a minimal increase in production cost. However, these tires offer higher fuel efficiency, which consumers preferring over the long run. This is an important factor driving the growth of the Silica for S-SBR market.

Globally, growing concerns about the importance of conserving natural resources and environmental protection coupled with increasing number of safety regulations for automobiles are leading to growth in demand for Silica for S-SBR made high-performance tires or low rolling resistance tires. Silica also provides substantial benefits in winter tires and all-season tires. Compounds using silica are more elastic and flexible at lower temperatures and therefore, allow better grip and braking during winters.

The magic triangle, i.e. rolling resistance, wet grip and wear resistance, can be improved significantly with the use of Silica for S-SBR. This material is finding significant usage in winter tires.

Over the past years, with the advent of green technology, silica has been widely used as a reinforcing filler tire material, effectively replacing carbon black. Tire makers have switched to Silica for S-SBR made tires to cut down the rolling resistance by 20% and increase fuel efficiency by 5%. Road transport contributes ~20% to CO2 emissions in the EU and other developed countries.

Thus, reducing emission has been critical to reducing green-house effect and the resulting climate change. The use of silica technology as a reinforcing filler reduces CO2 emission by ~7%. These factors have greatly influenced the global Silica for S-SBR market.

Silica for S-SBR Market Analysis, by End Use 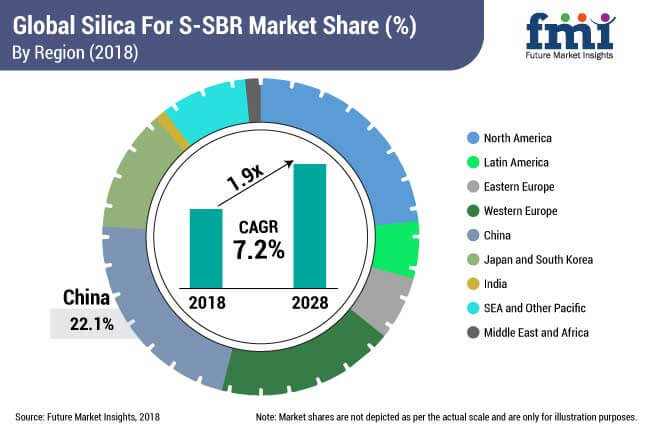 Some of the key players whose profile has been covered in the global silica for Silica for S-SBR market study are Trinseo, Lanxess Aktiengesellschaft, LG Chem, Dynasol Group,Taiwan Synthetic Rubbers Corporation, JSR Corporation, Sibur International GmbH, Sumitomo Chemicals Co. Ltd. amongst others.

Silica Manufacturers in the Global Silica for S-SBR Market