In June 2020, a Journal of Vacuum Science & Technology have reported the research on high power impulse magnetron sputtering of diamond (HiPIMS) like carbon coatings. Three variations of HiPIMS were used to deposit diamond like carbon coatings: 1) use of neon instead of argon. 2) use of bursts of short sputtering pulses. 3) high discharge peak current density in an Ar atmosphere. The three variations provided enough ion to neutral ratios to effectively control the coating quality using substrate bias. The coatings as a result were smooth, amorphous, hard and dense without much stress.

Sputtering is an advanced technology prominently used in electronics manufacturing wherein coatings of thickness in the range of 3–5 micro meter are obtained. The material that is to be coated exists either in planar or rotary form - termed as sputter target, while the product surface on to which the coating is to be obtained is called “substrate”. Sputter targets are made up of Metal and Elements, Alloys and Compounds. There are over 200 types of sputter targets used across diverse industries.

Sputter coating is mainly used for generating transparent conductive oxide (TCO) film on the substrate, which is used in various applications such as flat panel displays, solar panels, and semiconductors among others. The global consumption of sputter coating targets is expected to be pegged at 16,106.0 MT by 2026 end.

Sputter coating is prominently used in flat panel displays and this is expected to drive the global sputter coatings market owing to a rise in demand across the globe. Growing demand for smartphones, OLED, and LED screens among others in turn is expected to drive the demand for sputter targets over the forecast period. Along with this, growing demand for semiconductors and microelectronics has also stimulated the sputter targets demand over the forecast period.

Global semiconductor production is forecast to witness a steady growth of around 6% over 2016–2026, which is anticipated to boost the sales of global sputter coatings. Furthermore, government investment in solar energy projects helps increase the demand for solar panels.

Owing to a rise in demand for high efficiency thin film solar panels across the globe, there is an increase in the demand for sputter targets. Government regulations in developed regions such as North America and Europe pertaining to infrastructure development i.e. zero energy buildings will lead to an increased demand of the low-e glass that will in turn increase the demand for sputter targets. These factors are expected to boost demand of the global sputter coatings over the forecast period (2016 – 2026).

However, many industries are focussed on the development of alternative methods for effective coatings, and this is likely to adversely impact the demand for sputter targets. The variation in efficiency of coating and price fluctuation are other factors that are expected to restrict the growth.

In 2015, Asia Pacific excluding Japan (APEJ) possessed the maximum share of 59.6% (in terms of volume) of the global sputter coatings market and is expected to dominate it over the forecast period, registering a CAGR of 4.4% between 2016 and 2026.

Taiwan is set to remain a major consumer of sputter targets

In terms of consumption, Taiwan is a major consumer of sputter targets with a volume share of 35% and is expected to dominate the boost the demand during the forecast period. South Korea and China are other major consumers after Taiwan and it is expected that both countries will witness a healthy growth with collective incremental opportunity of US$ 1.04 Bn over the forecast period. 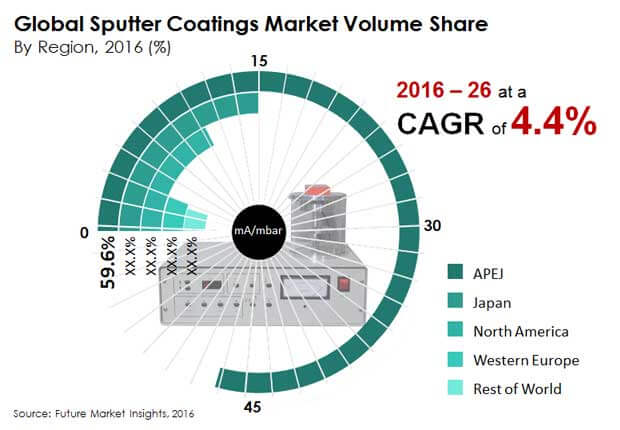