Pigs are mostly affected with respiratory diseases such as PRRS (Porcine Reproductive and Respiratory Syndrome), which is a one of the common diseases. The Porcine Respiratory and Reproductive Syndrome is caused by a virus and is categorised under arterivirus. PRRS disease is also known as blue-ear pig disease. The PRRS was identified in USA during the 1980’s and is also known as the mystery swine disease.

The PRRS disease is rapidly spreading in all the countries that are into pig productions, very few countries are left which are PRRS free today. The consumption of pork is increasing over the years across all the regions, which directly boosts the pork industry to produce more pork that is disease free, to enable the pork industry to meet the increasing demand for pork in the global market. 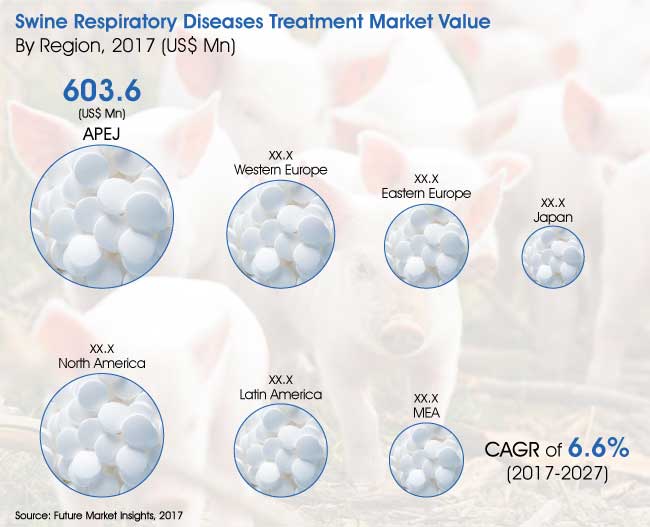 APEJ: APEJ is expected to lead the global swine respiratory diseases treatment market with its market size reaching a value of over US$ 1,100 Mn in 2027, growing at a CAGR 6.7%. However it is in close competition with Eastern Europe, which is leading in terms of CAGR, with a robust market growth at 6.9% CAGR during the forecast period. The animal industry is one of the fastest growing sectors in most countries of the Asia Pacific region. It is a vital industry linked to millions of jobs in related industries.

However, the health and growth of this industry are being threatened by the emergence of animal diseases. APEJ’s market includes China’s pig industry, where the Chinese government is willing to invest and increase the pig industry by implementing supporting policies to support large pig farmers.

Chinese scholars have indicated that they have found a new strain of PRRS virus (PRRSV) GDsg that was isolated in the Guangdong province of China, which caused high fever, high morbidity and high mortality for sow and piglets. This is helping APEJ’s swine respiratory diseases treatment market to grow exceptionally.

North America: The demand of pork in countries such as US and Canada is increasing, as a result the production of pork is increasing to meet the needs of the market. The pathogen free pork is directly contributing to the demand of the meat industry. In the pork industry in North America, especially in the U.S, most of the pork farms are using vaccines as the pork industry is looking forward to produce pork which is disease free. Vaccines are mostly used as preventive process to overcome the harmful pathogens.

The use of vaccines for PRRS (porcine reproductive and respiratory syndrome) and mycoplasma is increasing, the vaccine is directly given to breeding females, to enable the new born pig to be pathogen free. The increase in use of vaccines has helped North America’s market to reach a size of over US$ 780 Mn in 2027, growing at a CAGR of 6.5% during the forecast period. Also, the market is quite positive for investors in the animal healthcare sector and it seems like a win-win situation for both the parties (investors and manufacturers) in the long term.

The segmentation of the global swine respiratory diseases treatment market helps readers simplify the market study and understanding, by dividing the market into different segments on the basis of various parameters. The report provides an individual analysis of each and every segment, thus covering every part of the market.