Higher traction in transformer monitoring systems to steer the global market revenue growth by more than 2.6x during 2017-2027

Rising demand for refurbishment of existing grid infrastructure across developed economies will further complement the industry outlook. All these factors will create significant opportunities for equipment manufacturers and solution providers to target revenue generation from the distribution transformers segment. However, the power transformers will remain the major end-use segment of the market.

Moreover, electricity consumption has increased at a significant pace in Asian region owing to rising population, ongoing urbanization, substantial increase in industrial activities, and growing investment by government authorities to modernize electricity transmission. Asia registered notable number of installation units for projects tendered by the government authorities in 2016, and is further expected to increase in the coming years.

Moreover, Asia Pacific excluding Japan is anticipated to show high potential for growth of transformer monitoring systems during the forecast period owing to rising government support and increasing renewable power sources in countries, such as China and India. All these factors make APEJ one of the most attractive region for transformer monitoring system turnkey solution providers.

Bushing monitoring to witness higher significance in the coming years

Bushing Monitoring System allows to check the condition of transformers and detects deterioration in bushings, finds abnormalities in the insulation and issues alerts. The bushing monitoring segment in the application category is expected to grow at a higher pace in the coming years to reach a significant valuation by the end of the forecast period.

This segment has shown significant growth during 2012-20156 timeline. In 2017, this segment registered a comparatively high market valuation of about US$ 355 Mn and is estimated to reach a market value of more than US$ 1 Bn by the end of the assessment year (2027). Bushing failures are considerable high.

This has led to increased monitoring of bushings to avoid problems which in turn has caused increased use of transformers to monitor bushings. The bushing monitoring segment is projected to grow at the fastest pace to register a value CAGR of 12.1% throughout the period of assessment. 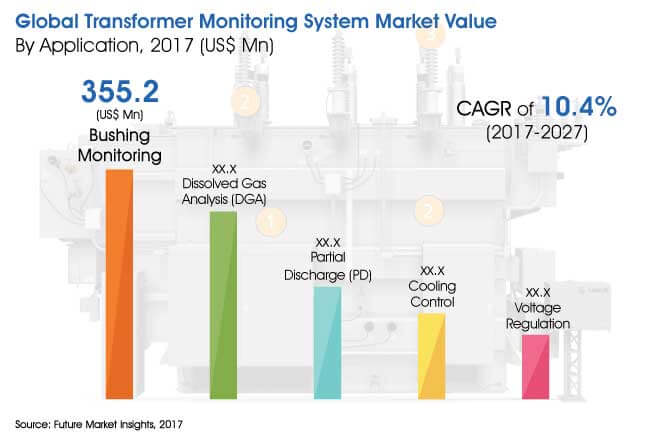 The dissolved gas analysis segment is estimated to reach a valuation of about US$ 800 Mn by the end of the year of assessment from a value of around US$ 470 Mn in 2017. It is projected to grow at a pace lower than that of other application segments and is poised to register a value CAGR of 8.7% during the period of forecast.