Varicella zoster spreads easily from people with chickenpox to others who never had the disease or been vaccinated. It can be transmitted by respiratory droplets, from skin lesions, by direct contact or possibly by aerosolisation of the virus from skin lesions. Chickenpox can spread from people with shingles to others who never had chickenpox or received the chickenpox vaccine. According to a study of the Centers of Disease Control and Prevention, transmission of varicella is high among household members.

About 90% of varicella cases are susceptible to close contact with people suffering from varicella. In schools and day care centres the transmission rate among susceptible children tend to be lower than 30%–50%. Varicella occurs worldwide with ongoing endemic transmission in areas where the population is sufficiently large to support such transmission.

Pregnant women, kids, and the geriatric population have the highest risks of developing a varicella zoster infection. As a result, if any person or kid is infected, they are either admitted or prescribed specific medicines or drugs for the treatment of the varicella zoster infection. Some of the medicines are only sold by hospital pharmacies as these medicines can only be bought if prescribed by a doctor or medical practitioner.

Stringent regulations are also another reason for an increasing number of purchases from hospital pharmacies. The FDA regulatory approval process for drugs is strict. Therefore, these challenges in the regulatory environment are prompting investors in the industry to shift their investments overseas, which may act as a restraint for the growth of the varicella zoster infection treatment market. Most of the companies are facing difficulties in bringing herpes zoster drugs and vaccines to the market without the necessary FDA approvals. As a result, the approved drugs can only be bought if prescribed by a qualified healthcare professional and from specific hospital pharmacies. 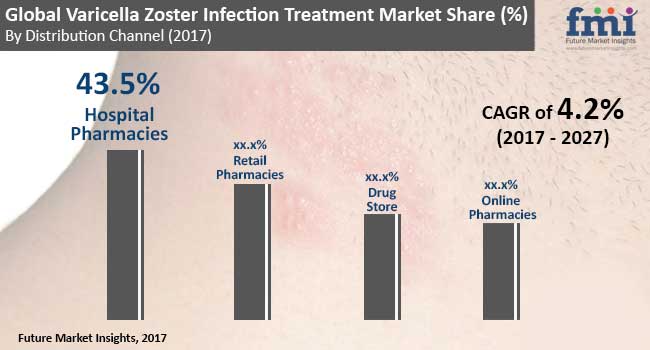 According to the IMF, global healthcare expenditure is expected to increase by over 6% yearly, based on the current GDP forecast. The rising geriatric population in developed countries and growing affluence in emerging markets are likely to boost healthcare expenditure. In the U.S., prescription drugs comprise 10% of the national health expenditure and this is expected to increase in the coming years. Besides, high spending on prescription drugs is attributed to the increased spending on new medicines, increased spending on generics, price rise of existing branded drugs, and fewer expensive blockbuster drugs going off-patent.

The governments and regulatory bodies of several countries are adopting various cost containment measures to reduce the healthcare burden, especially in developed economies. This change from a volume- to a value-based system is driven by various measures taken by the governments, healthcare providers, payers and pharmaceutical companies, which include outcome-based pricing, profit and risk sharing, price control and competitive tendering.

The value-based healthcare model is expected to help achieve supreme value for money spent on healthcare and thus improve the outcomes through integrated care pathways. Nevertheless, at the same time it would levy pricing pressure on biopharmaceutical and medtech companies, which may impact R&D investment for innovative medical treatment technologies. As a result of all these factors, the demand for bulk medicines is increasing and as retail pharmacies are the best place to obtain medicines in bulk, these pharmacies are getting a good push in the global market.