2020 Analysis and Review: Vegan Marshmallows Market by Pricing – Economic and Premium for 2020-2028

Marshmallows are back in the culinary limelight. Changing with the times, their perception has been further buoyed as a healthier confectionary item. In sync with modern-day preferences, marshmallows are available in various free-from options. Perhaps, none of the variants has created as much excitement among processors and consumers alike, as the vegan marshmallows. Already a distinctive lifestyle in its own right, veganism continues to create substantial changes in product offerings of the global food industry. And, vegan marshmallows segment is no different – already, a number of established and new entrants are looking to scale and consolidate their position. In a new latest, ESOMAR-certified market research and consulting firm, Future Market Insights (FMI) analyzes the key factors that will fuel demand in the next decade. The study tracks demand in over 20+ countries, with a detailed chapter on the impact of COVID-19 on this segment.

The global vegan marshmallows market is witnessing prolific growth, poised to expand at over 8% CAGR through 2028. Growth is largely underpinned by heightened consciousness about maintaining environmental sustainability and reducing environmental footprint in forthcoming years.

With an increase of clean-label products amidst the pandemic crisis, demand for plant-based products is bound to aggrandize, prompting manufacturers to launch new products and unique flavor combinations.

Healthcare experts have touted marshmallows as a highly effective remedy against numerous chronic and infectious ailments, ranging from common colds to managing more serious conditions such as cardiovascular diseases, diabetes and obesity.

A study undertaken way back in 2005 established efficacy of marshmallows in relieving coughs induced by colds, bronchitis and other respiratory tract diseases. Over a span of 12 days, the 62 participants in the trial reported almost 90% improvement in symptoms. Thus, lozenges containing marshmallow extracts have become highly popular.

Furthermore, marshmallow extracts have proven useful in addressing dermatologic conditions. The mucilaginous properties of the althea root allow for the formation of a protective covering over inflamed areas to reduce further inflammation. Such widespread applications are expected to boost vegan marshmallow sales in the long-run.

According to the non-profit World Animal Protection, global livestock production is likely to increase twofold by 2050 compared to 2000. Presently, over 70 billion animals are farmed for food annually. Over 60% of these thrive in conditions where they are unable to move freely or naturally.

Recognizing this disturbing trend, government worldwide are looking to sensitize consumers, urging them to shift towards plant-based and vegan diets. Over the years, significant progress has been experienced in this regard. For instance, at the recent G-20 summit in November, global leaders called for an agreement to stop wildlife trade.

Although the Food and Agricultural Organization expects annual meat production to reach 376 million tons by 2030, vegan food popularity is simultaneously increasing. With a valuation of over US$ 7 billion for the vegan foods market in the next half-a-decade, it is no surprise that vegan marshmallows market outlook appears positive.

As environmental concerns over meat consumption acquire precedence, consumers around the world are increasingly resorting to flexitarian diets. A popular study published by the University of Oxford advocates that curbing meat and dairy consumption reduces an individual’s carbon footprint by nearly 73%.

The study further propounds that if animal based food consumption stops completely, global farmland usage could reduce as highly as up to 75%, an area equivalent to the size of U.S, China, the EU and Australia combined. On the back of this, plant-based snack alternatives are becoming highly common.

Eventually, these aforementioned developments are expected to provide significant traction to vegan marshmallows consumption in the forthcoming forecast period. Player such as CEAMSA have become increasingly popular in recent years, offering a line of gelatin free marshmallows offering a similar texture as that of a regular marshmallow.

As the demand for vegan food products skyrocket, concerns regarding their branding, labeling and packaging have also surfaced. A significant issue expected to hinder the vegan marshmallows market is the use of on-pack claims.

This is substantially restricting sales with various product recalls being initiated by regulatory authorities. To that end, a robust manufacturing strategy needs to be developed, with emphasis on developing a framework which would clearly define what constitutes a vegan or vegetarian claim.

To that end, the European Commission announced the initiation of the process of establishing a legal definition as a part and parcel of its Regulatory Fitness and Performance Program (REFIT) in 2019. This development is likely to address possible bottlenecks in vegan products manufacturing.

The North American vegan marshmallows market is expected to grow at a CAGR of over 8% through 2028. According to a Gallup survey, 3% of Americans were vegan, while another poll conducted by the Vegetarian Resource Group pegged the number to 2% for the following year. In spite of this decline, the market for vegan products continues to rise. 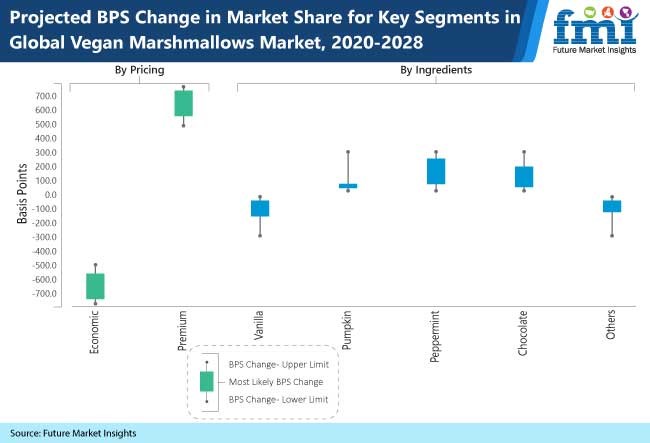 This has assisted in widening the scope of the regional vegan marshmallows market, prompting brands such as Campfire, Trader Joe’s, Kroger and Dandies to intensify their presence and tap into the ever proliferating demand from consumers.

Europe represents attractive investment opportunities for prominent vegan marshmallow manufacturers, attributed to an increasing prevalence of healthy eating across key countries such as the UK, France and Germany.

A popular survey conducted by Veganz, the proportion of vegan population has surged from 1.3 million from 2016 to 2.6 million currently, representing a two-fold increase in the past 4 years, representing 3.2% of the European population.

This shift is in response to increasing fatalities induced by increasing red meat consumption, leading to the emergence of cardiovascular diseases, colorectal cancers and type-2 diabetes. Hence, vegan companies are gaining ground in terms of plant-based marshmallow production.

The Asia-Pacific excluding Japan marshmallows market is likely to grow at a staggering 10% CAGR. Growth is primarily underpinned by an increase in disposable income levels in emerging countries, thus providing consumers access to premium confectionery products.

Likewise, Cargill Foods successfully inked an agreement to establish a manufacturing facility in western India to boost chocolate production for direct as well as indirect consumption. Such milestones are expected to widen prospects for the vegan marshmallows market across the region.

In terms of pricing, premium vegan marshmallows and associated products are expected to yield US$ 385 Mn in revenue by 2020-end. Enhanced purchasing power in light of widening income pools is a primary growth catalyst responsible for accelerating demand.

Reputed brands such as Dandies Vegan Marshmallows and Doumak are making significant inroads into lucrative markets across the developing world. However, economy priced vegan marshmallows are expected to retain prominence, since a substantial chunk of the global population earn a moderate income.

In terms of flavor, vanilla marshmallows are expected to retain lucrativeness, registering nearly seven out of ten sales throughout the forecast period. Extensive usage as flavoring agents and icings across various deserts is likely to enhance consumption in the upcoming forecast period.

Since its declaration as a pandemic by the World Health Organization, the COVID-19 epidemic has ushered in a paradigm shift in people’s dietary preferences. Consumers are gradually shedding animal-based food products for plant-derived ones amid apprehensions of possible virus transmission through animals.

Estimates suggest that nearly 60% of all known infectious diseases in humans are transmitted due to close contact with animals, with 3 out 4 emerging infections are likely to be zoonotic in the future. Hence, consumers are exercising extreme caution and making the required dietary transitions.

Moreover, meat production has witnessed considerable decline in the past few months. For instance, major meat processing plants in the United States shut down upon detection of major infection outbreaks, with an over 40% reduction in pork meat processing.

In fact, vegan marshmallow sales witnessed a considerable incline in recent months. Recent developments include the entry of Chicago Vegan Foods’ owned Dandies Marshmallows into the UK market in September 2020. Such prevailing trends are expected to generate fertile ground for the market’s proliferation in the upcoming future.

Future Market Insights’ vegan marshmallows market report has profiled the following prominent players operating in the landscape. These include, but are not limited to*:

*This list is indicative- full details about vegan marshmallow players is available upon request.

In September 2020, Freedom Confectionery introduced Mallow Out, a range of vegan mallow bars coated in vegan chocolate. The company also plans to announce a twin pack format consisting of two variants- vanilla and strawberry mallows. The company has also partnered with Pusheen the Cat to manufacture a chocolate coated gummy bar.

Likewise, Chicago Vegan Foods penetrated the European market by securing a listing across the UK grocer Asda for its vegan marshmallow brand Dandies. This foray is symbolic of the rising veganism trend prevalent across Europe and has reported a 100% sales rate.