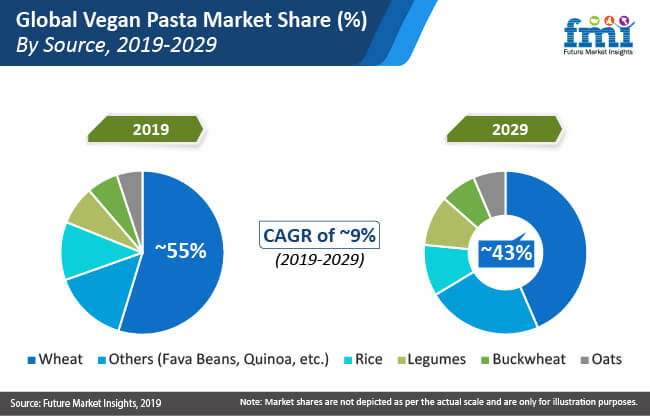 In addition, the brown rice vegan pasta is gluten-free, minimizing health-related issues, particularly for consumers suffering from gluten-intolerance. Vegan pasta sourced from legumes encompass lentils – black, red, or green – offering a treasure of nutrients, including protein and fiber (in ample amount) along with various vital nutrients - calcium, iron, and vitamin B6.

Penne and elbows made with quinoa, and black or green lentils provide 20 grams of protein a serving, accompanied by 7g of fiber and affluence of iron. In addition, vegan penne and elbows are non-GMO proven. Although wheat vegan pasta contains gluten, the pasta delivers higher protein and lesser starch versus commercial wheat. The wheat-sourced vegan pasta exhibits richness in antioxidants and minerals - zinc, manganese, magnesium, and iron.

Leveraging the Vegan Trend with Claim

The veganism trend peaked in 2018, boosting a number of businesses in the vegan category. Vegan pasta, one of these beneficiaries, has been especially garnering attention since then as pasta has already been among the most favored convenience foods, globally. Fresh pasta served at restaurants and cafés usually contains eggs.

However, although a majority of packaged pasta seemingly contains ingredients that are plant-based, it would be an overstatement to refer to them all as 'vegan'. Popular brands leading the way in vegan pasta market such as Barilla, Ronzoni, Explore Cuisine, and Mueller's currently offer a variety of pasta with the authenticated vegan claim. These brands prominently see their vegan pasta selling at the all-vegan sections of Walmart, Whole Foods, and Costco.

On the other side, consumers following a vegan or vegetarian diet ought to recheck the ingredients mentioned on packets of store bought pasta. Still in its infancy, vegan pasta market is expected to see robust growth in the near future.

Reports suggest that the production of vegan products in Europe is witnessing a two-fold growth, with the UK topping the list, replacing Germany. About a fourth of consumers in Canada are shifting towards a vegan diet. The demand for plant-based consumables in the US is significantly increasing - ~30% in 2018 – a staunch indicator for vegan pasta producers.

The certifications available on the label of food products provide insights to the consumers regarding vegan or meat-based. Conventional supermarkets incorporate a broad array of food products, making consumers look thoroughly before purchasing the food items. Specialty stores in countries, including the US, are being launched strictly offering a wide range of vegan consumables. As such, manufacturers of vegan pasta set their focus on penetrating into specialty stores.

With specialty stores snowballing in developed countries, vegan pasta makers are walking the extra mile to sell the offerings through specialty stores comprehensively. The movement of plant-based consumables is intensifying in countries including the UK, the US, and Australia – a factor driving competitors to channelize vegan pasta to these regions.

With the message of vegan and veganism spreading like wildfire across the globe, legacy pasta makers are inclining towards providing plant-based or vegan pasta in a bid to serve the vegan consumers. The demand for healthy and clean label food products is spectating a major uplift, motivating pasta makers to focus on the production of vegan line-ups.

Consumers holding intolerance towards gluten tend to shift away from gluten-based products, particularly meat-based consumables. As a consequence, vegan pasta is set to make forays into the diet of health-conscious and vegan consumers. Although 3D printing technology is in its emerging stage in the food industry, early birds are expected to gain an edge over their market competitors.

What is the outlook of the Vegan Pasta Market: Beyond Plant-Based?

Which are the leading companies in Vegan Pasta Market: Beyond Plant-Based?