The demand for version control systems is expected to top US$ 629.3 Mn in 2021. As per Future Market Insights (FMI) analysis, the market will register impressive growth at 10.7% CAGR between 2021 and 2031, as enterprises around the world exhibit high demand for automation and digitalization in the software development processes.

Version control systems functioning as standalone applications are now being integrated with various software offerings. This integration enables developers to use the enhanced features of a version control system and keep a track of every change, as the file is in consideration.

Technological advancements have led to a transition towards automation and digitalization to reduce associated human tasks and errors. Additionally, the ease of operation and user friendliness also reflects high demand for the same.

Consequently, the high demand for automated software management and tracking tools are expected to drive the growth of the market on a global scale. The global market is anticipated to witness growth in revenue from US$ 629.3 Mn in 2021 to US$ over 1,738.6 Mn by 2031. 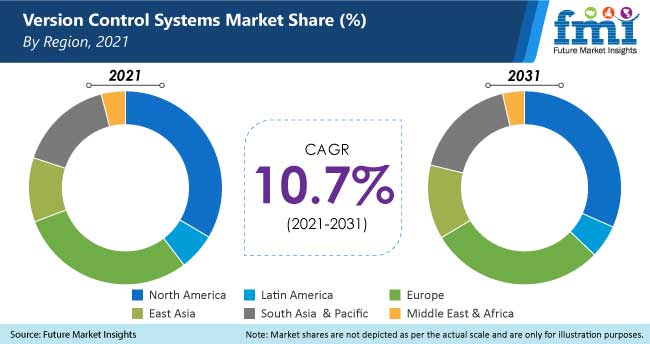 The increasing adoption of smart phones and tablets, and advancing technologies has resulted in increased spending on application development and deployment. Version control systems, being an integral component of the software development process will reflect a positive growth trajectory.

What are the Key Expansion Strategies Used by Version Control Systems Providers?

Companies operating in the market are delivering software solutions proactively, and are providing consultation services to help end-users maneuver through the ever-changing requirements.

With the deployment of version control systems, the companies operating in the market are helping software teams to collaborate and maintain the complete history of code changes. This allows developers to keep track of the modifications being made to the software modules.

Companies have been working with software development teams to cater to their customization demands aimed at meeting their frequently-changing industry specific requirements.

Why is the Demand for Version Control Systems Surging in the U.S.?

Furthermore, the rising penetration of smartphones and internet in the country also drives market growth. Growing demand for mobile apps and the rising necessity to manage diverse versions of these apps are anticipated to offer major growth opportunities to emerging and established players in the market.

Is Germany a Lucrative Market for Version Control Systems?

The market in Germany is anticipated to be valued around US$ 162.3 Mn by 2031. In recent years, many SMEs in European countries including the U.K., France, and Germany have adopted version control software solutions and services owing to the popularity of cloud-based solutions.

The market in Europe for software development services is on the rise. The shortage of skilled software developers is pushing European companies towards outsourcing their processes.

However, in 2017, the EU Commission altered this estimate to a shortage of 500,000. Thereby, European countries happen to be a high potential market for version control systems.

Moreover, the abundant benefits offered by version control systems, including interoperability, portability, and auditing, are expected to boost market growth. Furthermore, growing development teams in the region and increasing demand for collaborations for projects to accelerate the product delivery processes are likely to support growth.

What is Driving Demand for Distributed Version Control Systems in China?

In the wake of this pandemic, there has been an increase in demand for digitization to run businesses across the globe. Growing demand for automation is anticipated to fuel demand. Companies across China are focused on implementing digital technologies in order to resume business operations through 2021 and beyond.

How are Version Control Systems Sales Faring Across India?

The market in India is anticipated to witness a growth in revenue from around US$ 3.6 Mn in 2020 to US$ 61.2 Mn by 2031. The demand for centralized and distributed version control systems has increased rapidly across various industry verticals in major economies of the South Asia and Pacific region including India and Australia, which has created key potential growth opportunities for the market.

Open source distributed version control systems permit developers to alter and develop the source code as per their requirements with no cost, and is predominantly gaining popularity among individual software developers.

The demand for distributed version control systems is projected to show major growth as developers seek cost-efficient operations. Furthermore, rapid growth in the retail and healthcare sector is expected to drive the market.

The growth can be attributed to the rising demand for cost-effective tools for development along with increasing demand to minimize complexities in software development. There has been an increase in traction for distributed version control systems and the segment is expected to grow at the highest CAGR of 12.7% over the forecast period.

In terms of deployment, the market is segmented into cloud and on-premise variants. The cloud segment is expected to register the highest CAGR of 10.4% during the forecast period, while also creating an incremental opportunity of US$ 26.3 Mn between 2021 and 2031.

For example, cloud-based service providers provide issue tracking integrated with the source control systems, which allows developers to identify and track issues that primarily initiate during the development process.

Why are Large Enterprises Holding a Larger Market Share?

The growth of the segment can be primarily attributed to the growing need for better quality solutions and an efficient development process in large enterprises. Furthermore, high investments in research and development activities also contribute to business productivity.

Why is the Demand for Version Control Systems Rising from the BFSI Sector?

In terms of end-use industries, the market is segmented as BFSI, healthcare, IT & telecom, retail, education, and others. With the growing popularity of digitization and automation across all industries, there has been rise in demand for version control software solutions.

The BFSI industry segment is dominating the global version control systems and it is estimated to account for 19% of the total market value share by the end of 2021.

The growing demand for machine learning and artificial intelligence is expected to bolster the deployment of numerous applications and software in the BFSI and retail industry verticals. Version control systems play a crucial role in BFSI organizations.

Companies manufacturing version control systems are aiming for product innovation and strategic partnerships with other software vendors to enhance their portfolios while addressing the demand of an expanding customer pool. Introduction of new products and strategic partnerships are key with the top players in the version control systems landscape.

Version control software providers are also focusing on entering into partnerships with technology and digital solution providers to target new innovations within the market. The strategy helps companies to broaden their geographic reach with additional service portfolios.