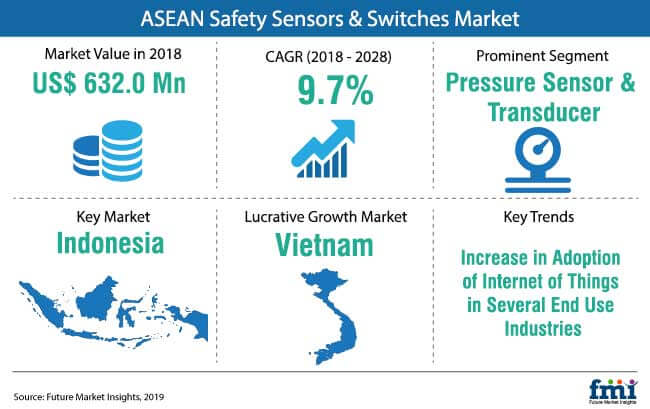 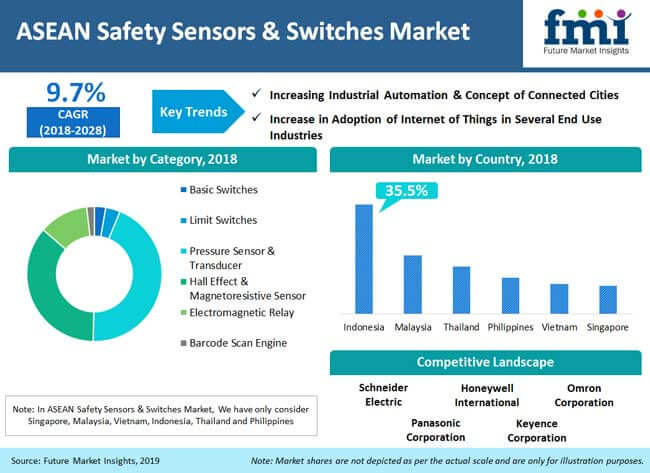 Governments in developing countries such as the Philippines, Malaysia, and Vietnam, in the ASEAN region, are focusing on ensuring safety at the work environment for employees. These governments are enforcing laws for the generation and maintenance of a safe environment at workplaces, especially at factories that involve machines.

Rising demand has compelled manufacturers to optimize their production through automation. Factory automation has been seen to rise significantly in various ASEAN countries. This has been a driver for the market of safety sensors and switches, since the process of automating in a factory involves safety standards levied by governments in the ASEAN region.

Along with this, automated factories result into better yield, and thus, generate better revenues, as this cuts down on labor wages and operates economically at a constant pace. This is expected to lay a strong base for the significant growth of the safety sensors and switches market in ASEAN countries.

Under Industry 4.0, which is the fourth industrial revolution, the idea is to automate factories in such a way that production goes on even without any kind of human intervention. The sensors and autonomous robotics technology in industries is expected to be implemented globally by the end of 2025. This has given rise to a good opportunity for the safety sensors and switches market, as it would be impossible to monitor robots without them.

Sensor technologies are becoming an imperative element in new and existing Internet of Things (IoT) technologies implemented in various applications in industrial, commercial, as well as residential sectors. Increasing importance of safety in the ‘Artificially Intelligent’ environment in smart and connected cities in ASEAN countries will only increase with time. Consequently, the adoption of automation technologies will become an exponential function, making safety sensors and switches an inevitable need in the tech-era.

ASEAN countries are among the fastest growing economies in the world and becoming the face of technological and digital transformations. Safety concerns among consumers as well as governing bodies with the implementation of automation technologies will continue to boost adoption of safety sensors and limit switches in the region. Moreover, stringent safety policies established by governing bodies will bolster the installation of new as well as retrofit safety sensors and switches in technologically connected spaces.

Indonesia will remain the most lucrative region for manufacturers, accounting for the largest revenue share of the ASEAN safety sensors and switches market. The government has adopted the new ‘Making Indonesia 4.0’ strategy, which highlights the potential of modern manufacturing technologies in various industrial sectors. With the ongoing infrastructural developments and industrial growth in the country, the demand for safety sensors and switches in Indonesia will only grow stronger in the coming years.

Leveraging technological advancements to launch innovative and efficient safety sensors and switches to retain customers is proving to be a winning strategy for leading players in the market. Manufacturers are targeting industrial players and governing bodies to capitalize on increasing adoption of connecting technologies in government projects and manufacturing environments.

A mounting number of new businesses and start-ups entering the market in ASEAN countries will compete on cost-effective yet high-tech features of pressure sensors and magnetoresistive sensor to gain an edge in the market.

The technology outburst in the manufacturing industry in ASEAN countries makes industrial sector a lucrative business segment for safety sensors and switch manufacturers. End-users in the manufacturing incorporating next-generation technologies, such as Industry 4.0, human-machine interface, robots, and sensor technologies, which is creating enormous sales potential for safety sensors and switches in the industrial.

Leading manufacturers will shift their focus on introducing next-generation safety sensors and switches to suit the dynamic needs of the tech-driven industrial end-users in ASEAN countries.