Automated suturing devices are medical devices used for sealing tissue after surgery or wound. These devices are used in various surgeries. In most developed countries, automated suturing is preferred over conventional suturing as it enables better wound healing and decreases hospital stay duration of patients post-surgery.

Increasing geriatric population, number of surgical procedures, incidence of trauma cases, risks associated with changing lifestyle, trauma cases and adoption rate of minimally invasive procedures are key factors driving growth of the automated suturing devices market. Prevalence of obesity is increasing significantly in the U.S. and other developed countries as compared to other regions of the world.

These devices, especially disposable automated suturing devices, are preferred by surgeons over conventional suturing method. Though this market is growing at a significant rate, low product availability, high cost along with lack of skilled professionals is proving to be a major hindrance to overall growth of the market.

The region is expected to witness launch of various new products, with increasing number of players expected to enter the market over the next five years. Japan market is projected to witness a healthy CAGR of 5.1% during the forecast period. APEJ market is estimated to hold 16.1% share in the global automated suturing devices market by the end of 2015. 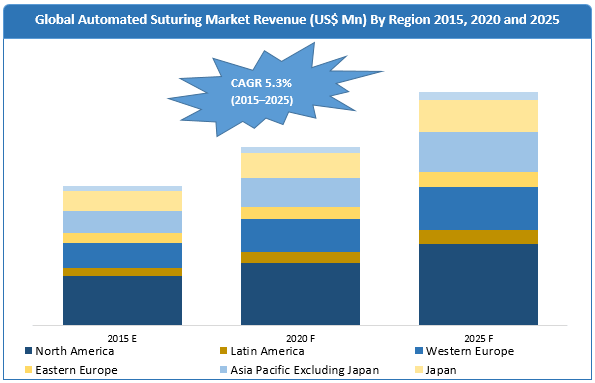 Major companies are acquiring other companies to strength their position in the market. In 2013, Boston Scientific acquired the fixate tissue band – a semi-automated suturing device – from Anulex Technologies.

On the basis of application, the global automated suturing devices market is segmented into:

The next section of the report analyses the market based on end-user segments and presents the forecast in terms value for the next 10 years.

End-use segments covered in the report include:

The next section of the report analyses the market on the basis of region and presents the forecast in terms of value and volume for the following 10 years.

Regions covered in the report are: