North America has the largest aftermarket share and China is the biggest production base. With the increasing car security consumption in APEJ region and rising awareness among car owners, the region is expected to overtake the North America market in the coming years.

According to Western Australia Department of Transport, fitment of immobilizer is mandatory before licensing and transferring a vehicle in a territory. But high cost of these systems are limiting the global car security system market, some systems are offered as optional while some are preserved for luxury cars

OEM market has lower prices as compared to aftermarket prices

In terms of volume, immobilizer system has huge penetration in OEM market where aftermarket is dominated by remote central locking system, owing to larger lifespan of immobilizer systems. Due to increasing adoption of other systems in economic cars and mid-range cars, other system segment is expected to register the highest CAGR of 6.0% over the forecast period.

Mid-range cars segment is estimated to possess 56.9% share of the market

APEJ has the highest CAGR of 8.7% with largest market as China and South Korea with share of 65.8% and 11.5% respectively in 2015. Countries such as Turkey, South Africa, Mexico, India and China are the fastest growing markets. Western Europe is estimated to have 19.9% share of global market with leading country as Germany, whereas Spain, UK and France share 13.0%, 13.4% and 13.2% of Western Europe car security system market. 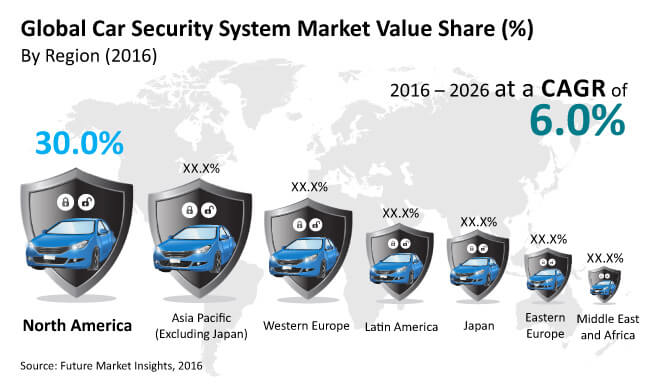 As aftermarket segment is highly fragmented, new entrants are focussing on this segment of the market

The section that follows analyses the market on the basis of product type and presents the forecast in terms of volume and value for the next 10 years. Product type covered in the report are:

This is followed by a section analysing the market based on car type and presents the forecast in terms of volume and value for the next 10 years. By car type, the market is segmented into:

The next section analyses the market based on sales channel and presents the forecast in terms of volume and value for the next 10 years. By sales channel, market is segmented into: