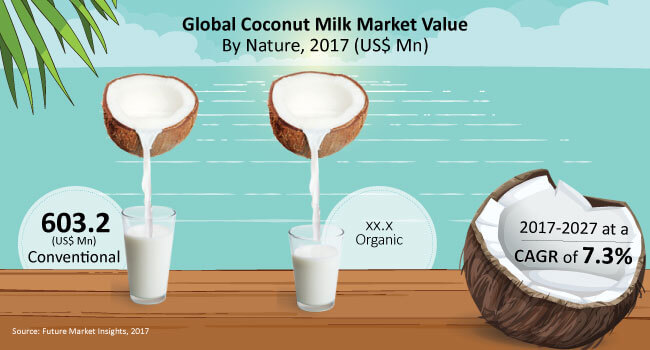 Since the last few years, Asian cuisine has gained immense popularity among food lovers across the globe. They have been developing a taste for cuisines that include coconut or coconut milk and this is the key factor likely to fuel revenue growth of the global coconut milk market during the projected period.

Consumption of Asian food in countries such as the U.S. and Canada has increased substantially, owing to increasing tourist population visiting countries in Asia and sampling and developing a taste for the local cuisine. For instance, sales of Asian food at Asian restaurants in the U.S. have almost doubled in the past few years, indicating that preference has grown substantially in a short span of time.

Our analysis indicates that increasing consumption of vegan desserts and ice creams also boost the coconut milk market. Rising number of vegan individuals particularly in Europe is a major factor driving the growth in consumption of organic and conventional coconut milk and associated products. Increased demand for vegan ice creams and desserts is driving the sales of plant-based substitutes for regular milk.

There has been an increase in the use of coconut milk in vegan ice creams and desserts, as people have developed the taste for coconut milk over time. Top-notch hotels have also started offering vegan desserts and ice creams on their menu, owing to increasing demand.