The global market, in 2017 is valued at US$ 5.5 Bn and is estimated to reach around US$ 11 Bn by the end of 2027. The high growth is due to development of new battery technologies for additional power storage, increasing demand from industrial and commercial sectors in the coming years and increasing technological development in energy utilization.

One of the segments of the global digital inverter market is the end user category. Utilities segment in this category is a highly lucrative segment. It has reflected high growth potential during the 2012-2016 with respect to both growth rate as well as revenue and is likely to show increased potential in the years to come. The utilities end user segment is expected to reach a valuation of more than US$ 5500 Mn by the end of the year of assessment from a value of a bit more than US$ 2800 Mn in 2017.

This rise in estimation can be attributed to increasing demand for digital inverters from the utilities sector. The utilities segment is projected to expand at a robust rate to register a CAGR of above 7.2% throughout the period of assessment, 2017-2027. 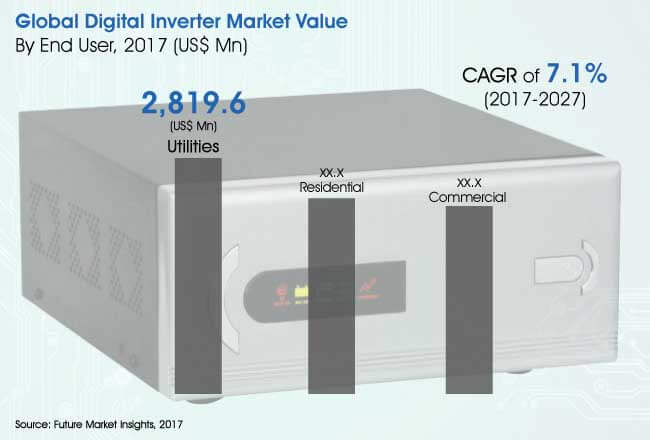 Commercial sector, following utilities, is showing higher inclination towards using digital inverters. This trend has been observed since 2012-2016 timeline. The commercial segment is expected to rise at a noteworthy CAGR of 7.0% throughout the assessment period.

The commercial segment reflected a revenue generation of around US$ 1.2 Bn in 2016 and is anticipated to touch an estimate a little under US$ 2670 Mn by the end of the year of forecast. This segment is expected to represent a Y-o-Y of 6.1% by the end of 2027.

Digital inverter market is soaring across the globe through regional geographies such as North America, Asia Pacific excluding Japan (APEJ), Western Europe etc. In North America, the utilities end user segment reflected higher revenue share and is expected to grow at a 7.2% CAGR during the forecast period. The commercial end user segment in Western Europe is estimated at around US$ 340 Mn by end of 2027. The utilities segment dominates the Western Europe digital inverter market in terms of market value and growth rate.

The utilities end user segment is projected to grow at a 7.9% CAGR during the period of forecast and reach a huge valuation of around US# 2.4 Bn by the end of the assessment year (2027). The commercial segment in this region is also expected to show significant growth contributing to the growth of the global market.