Dimethylolpropionic acid is a crystalline compound that is increasingly gaining traction for its extensive use in the development of aqueous urethane dispersions, which are ideal for high gloss waterborne coating offerings with superior flexibility and free-flow characteristics. Dimethylolpropionic acid is also used in powder coatings as a modification agent in epoxy polyester compounds for improving flow properties, higher levels of gloss, and better impact resistance. Furthermore, DMPA is also used in the development of urethane elastomers for multi-substrate applications.

The growing global demand for electrodeposition coatings particularly, arising from the metals production and processing sector is expected to positively influence market growth. Electro-deposition allows for low-cost production of coatings, while maintaining high performance standards, improving the functional properties of the material. Dimethylolpropionic acid is also widely used in electric appliances such as HVAC systems. Consequently, the use of associated coatings will drive growth over the forecast period.

ESOMAR-certified market analysis and consulting company Future Market Insights (FMI) delivers insights into key factors driving the dimethylolpropionic acid market in its latest report. Additionally, an evaluation of the effect of the COVID-19 pandemic on the dimethylolpropionic acid market in general, and an analysis of sales in 20+ high-growth markets and relevant end-use industries has been provided in the report.

How are Historic Trends Comparing to the Future Outlook of Dimethylolpropionic Acid Sales?

For the past five years, from 2016 to 2020, the dimethylolpropionic acid market has displayed healthy growth with a CAGR of over 8%. Prominent manufacturers including Perstorp Specialty Chemicals AB, Henan Tianfu Chemical Co. Ltd., Jiangxi Nancheng Hongdu Chemical Technology Development Co., Ltd., have encouraged efforts towards portfolio expansion strategies, in addition to strategic collaborations and acquisitions in developed and developing countries.

As per the Future Market Insights report, the covid-19 pandemic cut into the short-term rate of growth in the dimethylolpropionic acid industry. However, the market is expected to witness a steady recovery through 2021 with an estimated CAGR between 7% and 10%. Countries across the Asia Pacific excluding Japan region will remain major contributors to growth. Increasing awareness and rapid adoption of polyurethane dispersion processes in the United States will provide major impetus to developments of the market in the near future.

How are Developments in the Coatings Sector Influencing Growth?

As per a World Bank report, the global economy slumped by more than 4% during 2020. As the coronavirus pandemic continues to gradually subside, recovery is likely to remain slow even through 2021. Major investments into infrastructure and construction projects such as ports, communication infrastructure, and renewable energy setups will contribute to growth. These factors are expected to generate major interest and demand in the dimethylolpropionic acid.

Manufacturing activity is set to rise in multiple end use sectors including automotive and parts, furniture, chemicals, and the oil & gas industries. Domestic production of automobiles, fabricated parts, durable goods, and healthcare devices are expected to continue growing with upgrades for equipment and processes through 2021, positively influencing applications of DMPA. While the specialty chemicals industry is expected to go through a slight slump, resilience displayed by consumer chemicals and industrial gases among others reflect a potential for positive trends in the near future.

What are the Leading Challenges Faced by Dimethylolpropionic Acid Manufacturers?

On one hand, the niche applications of DMPA have set up very positive expectations for the future of the market. However, manufacturers are expected to face a number of challenges in the near future to consolidate production and distribution operations.

The easy availability of numerous substitutes for DMPA including TME, TMP and DMBA, at relatively lower cost has emerged as a major threat to the growth of the global DMPA market. DMBA which is a tertiary carboxylic acid group and two reactive hydroxyl groups, is similar to DMPA in chemical characteristics.

In recent years, the rising penetration of DMBA in polyurethane dispersion applications has bolstered at adoption at a faster rate as compared to DMPA. This will continue to negatively impact demand for DMPA, which has resulted in some DMPA manufacturers around the world to shut down select operations. Research into widening the scope of applications in addition to strategic pricing will play key roles in the development of the market.

What Factors are Fueling Sales in the United States?

The United States is emerging as a major market for specialty chemicals in North America owing to high demand from the chemical and coatings sectors. Innovations in these industries are further bolstering the growth prospect of industry players in the country.

According to a report by Select USA, the United States is a global leader in terms of research, product development, and manufacturing, for various consumer goods sectors. Demand for DMPA in North America is expected to rise strongly due to potential applications in protective coating formulations, which make use of resins and PUDs.

According to the report, the United States consumer goods industry accounted for more than US$ 600 bn. With the growing need for advanced non-toxic coating solutions, there is substantial scope for lucrative growth for dimethylolpropionic acid distributors.

Why is Germany Displaying Strong Potential for Growth?

Germany has held the lead in Europe’s DMPA industry for the past few years and likely to continue holding its position throughout the assessment period. Rapid evolution of manufacturing centers in the country in addition to demand from infrastructure development sectors are driving the growth of the market in Germany.

The relatively high population density of Germany and the resultant demand in terms of furnishing and automobiles are driving growth. Approximately a million people in the country produce goods worth several billion Euros annually, making its polyurethane dispersal sector among the largest contributors in the European Union. This is a key factor why suppliers are pushing for penetration into Germany with the aim of bolstering their profit margins.

Demand for DMPA from developed countries in Western Europe such as Germany, France and the U.K. is relatively higher than other regions. The increased production of PUDs in Germany, drives demand for DMPA in the region.

What is Driving Demand in the Chinese Dimethylolpropionic Acid Industry?

China is dominant as the world’s fastest-growing dimethylolpropionic acid industry in the Asia Pacific region and projected to continue holding its lead for the duration of the forecast period. Innovations in automotive production and top-coating solutions and high requirement for DMPA from the chemical industries are fueling sales in China.

As per a report published by the Trade Commissioner Service of China, the manufacturing and coatings industry in China displays high potential for growth, with imports worth US$ 50 bn. As sustainability initiatives take of in the country’s paints and coatings sector, the statistics allow for lucrative growth opportunities for DMPA manufacturers in China.

How Will India Contribute to the Growth of Manufacturers?

India has come into attention for DMPA manufacturers in the past decade owing to rapid development in industries and advances supported by government incentives. With the rise in application in metal industries, and other production sectors, India is likely to display promising growth prospects through 2031.

According to a report by the India Brand Equity Foundation (IBEF) on the automotive industry is set to grow at 13% per annum, and surpassed US$ 160 Bn in FY16 in India. As stated in the report, the total auto component exports accounted for major growth, which is forecast to continue growing further in the near future. DMPA suppliers are increasingly likely to show interest towards the nascent Indian market to bolster their sales footprints. 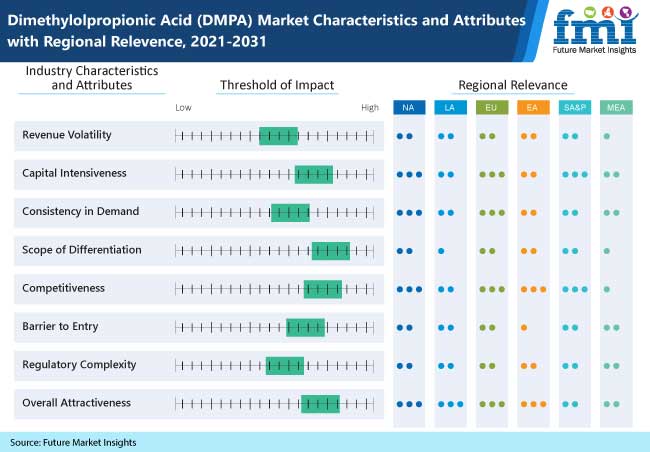 How are Polyurethane Dispersion Products Set to Fare?

The polyurethane dispersions applications of DMPA are estimated to remain in the lead, accounting for over 80% of the global consumption figures. DMPA is extensively used in Polyurethane Dispersions (PUDs) to set up superior hydrophilic characteristics in polyurethane polymers.  Also, potential applications in the production of glass fiber sizing, adhesives, wood finishing, automotive topcoats, others will drive growth.

Resin coatings are another prominent application which accounts for substantial DMPA production and use. The compound is used in water soluble alkyd and polyester resins for superior hydrolytic stability, with minimal coupling solvents. DMPA provides better resistance to water spots in air dried resins.

The automobile industry is displaying a relatively faster rate of growth for with powder coating applications, owing to this, the demand for powder coatings is expected to rise at a CAGR of more than 6% during the forecast period. This in turn is likely to fuel demand for DMPA.

Increasing urbanization initiatives, evolving lifestyles and major investments into the building and construction industry is supporting growth in polyester resin applications. Polyester resin accounts for growth at a CAGR surpassing 7% during the assessment period.

Leading manufacturers in the moderately consolidated dimethylolpropionic acid market are focused increasingly on research and development efforts aimed towards portfolio expansion objectives, in addition to extensive efforts towards seeking strategic acquisitions and collaborations in the industry.

In September 2019, CPS Performance Materials announced the acquisition of GEO Specialty Chemicals, which will allow the company to expand its market portfolio, and special chemicals for personal care and nutrition applications.

In April 2021, CD Bioparticles introduced a series of dendrimers, including DMPA-G1-TMP-Azide, DMPA-G1-TMP-Acetylene, DMPA-G1-TMP-NHBOC, and DMPA-G1-TMP-Carboxyl for applications in coatings, theranostics adhesives, biosensors, and optics.

Future Market Insights has also analyzed the following players in the dimethylolpropionic acid market in its detailed report*:

*This list is indicative- full details about the dimethylolpropionic acid market players are available upon request.