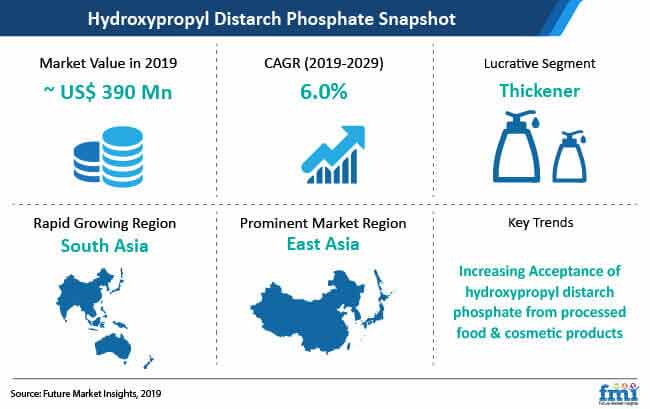 It is also used as a deflocculating agent and film & filament forming agent in end-use applications. Owing to the rapid changes in the economic growth and increasing industrialization, the demand for improved additives (hydroxypropyl distarch phosphate) is being witnessed in the recent years.

Increasing Number of Agreements and Contracts to Ensure Long-term Supply

Research is underway to invent new technologies for processing and modification of starch. Efforts are being made by manufacturers to improve the properties of hydroxypropyl distarch phosphate-based thickeners, stabilizers, emulsifiers, and anticaking agents.

Increasing demand for processed food from developed and developing economies is increasing pressure on the food processing industry to use effective and efficient food additives. Modified starches are gaining more importance in the food processing industry for their improved properties and better performance as thickener, stabilizer, and emulsifier. 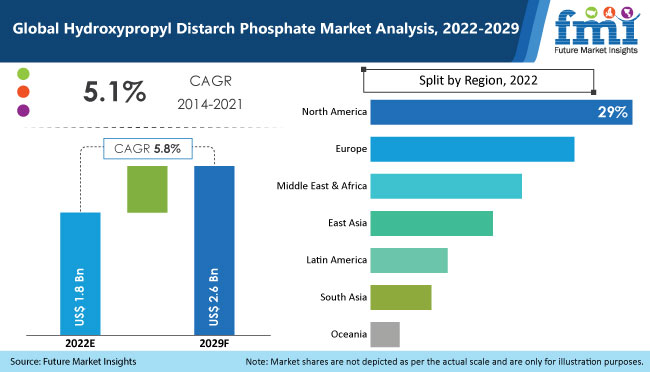 Hydroxypropyl distarch phosphate (HDP) plays an essential role in enhancing the physical aspects of consumables, on account of better resistance against acid and starch degrading enzymes – in vitro and in vivo – and against native starch. HDP – a chemically modified resistant starch – does not release glucose through the small intestine, aiding into lower glucose and insulin to the response of the consumable. As such, hydroxypropyl distarch phosphate helps in countering the generation of new fat cells, ensuring balanced appetite in the body.

Flours used in bakery products are mixed with hydroxypropyl distarch phosphate for preparation of bread loaf of bigger volume, based on higher peak viscosity and larger breakdown. HDP, modified with optimum cross-linking, is a great substitute for wheat flour to enhance rheological properties of dough. Further, inclusion of hydroxypropyl distarch phosphate in food and beverages conduces to decreased blood triglyceride content, and cholesterol which otherwise results in heart attack, strokes, and peripheral artery disease.

However, it is pertinent to note that, hydroxypropyl distarch phosphate enable fast fermentation by the intestinal bacteria upon its intake, making it unsuitable for individuals sensitive to active fermentation of oligosaccharides.

Sweeping rate of fast food consumption in developed and developing economies, including China, Japan, and Thailand, is set to underpin the progress of hydroxypropyl distarch phosphate market. The per capita calories consumption in East Asia is estimated to reach about 3200 kcal while slightly below 3000 kcal in South Asia by the next decade.

Japan has secured its place among the top five markets for baked goods, and ranks 2nd in the APAC, citing rising demand for bakery consumables. Considering the elimination of gluten from a majority of Thai cuisines due to its slow breakdown, manufacturers are focusing on increasing the applicability of their products. Significant growth of the cosmetic industry in India is further likely to open new avenues of the market growth.

The global hydroxypropyl distarch phosphate market is characterized by high fragmentation with market leaders, followers, and sluggards, including Tate & Lyle, Cargill Foods, and Sinofi, among others, in neck-and-neck with each other.

Market players are positioning their focus on increasing the production of hydroxypropyl distarch phosphate, in a bid to carve spaces apart from their native industry. For instance, Cargill Inc. offers products in multiple business segments – food, nutrition, and industrial products and services. Green Stone Swiss Co. Ltd. is expanding portfolio across diverse segments, including pharmaceutical ingredients, herbal extracts, and others.

Organized and emerging market participants are tapping white spaces in Middle East and South-East Asia, in the view of surging demand for halal grade consumables among the regional demographic.

The global hydroxypropyl distarch phosphate market is estimated to spectate healthy growth over the forecast timeframe despite high compliance costs. The growth is primarily driven by increasing consumption of food & beverages, and dairy products, in countries across the globe. Intensifying inclination towards nutritious diet among health-conscious, and athletic individuals is set to fuel the demand for hydroxypropyl distarch phosphate.

Almost 60% of European populace devour processed meal, with females consuming greater amount of functional beverages. Flavored drinks are expected to propel at an impressive rate of above 7%. Organic milk in Oceanic countries, including Australia and New Zealand is receiving wide acceptance among the masses. Increasing wellness trends across Latin American countries such as, Brazil, has boosted per capita consumption of flavored and functional water.

Further, the global requirement for food is expected to reach about 98% over the next three decades. The result is likely to lead to increased demand for hydroxypropyl distartch phosphate market in the years ahead.