2019 Analysis and Review of Probiotic Supplements Market by Bacteria - Lactobacillus, Streptococcus, and Bifidobacterium for 2019 - 2027

For instance, in April 2019, Bicodex announced the launch of new probiotic supplements--FlorastorBaby. The product has been developed for maintaining digestive health as well as immunity health of the newborn babies. In addition to this, in August 2018, Archer Daniels Midland Company announced the acquisition of Probiotic International Limited for the expansion for animals and human beings. Besides this, in November 2017, Royal DSM announced that it has acquisition Biocare Copenhagen for the expansion of its gut health portfolio using probiotics.

In an attempt to gain distinct competitive edge, manufacturers of probiotic supplements are focusing on introducing products that appeal to women and kids in these countries. Additionally, product differentiation remains a key focus area of market players to influence their brand positioning and marketing strategies.

Urinary tract and vaginal infections are among the most common bacterial infections affecting millions of women worldwide. Recurrent of these infections is another significant health issue which may lead to neurogenic bladder infections. In several countries, conservative societies not only prevent women from discussing such infections but also make it difficult for women to obtain required medication.

Probiotic supplements are deemed to be an effective solution to women’s health issues. Additionally, use of probiotic supplements not only restores good bacteria in the body, but also bolsters immunity, improves fertility, prevents traveler’s diarrhea, clears skin problems, and boosts digestion. In response to growing demand, specifically from women, manufactures are introducing several probiotic supplements targeting women health and well-being.

Population and diversity of bacteria in infant's gut are similar to type of microbiota that the infant accumulates during gestation. Moreover, the first microbiota (commensal, symbiotic, and pathogenic microorganisms in a body) of infants are structured primarily by their mode of delivery. Thus, early colonization arrays of bacteria in the gut of infants born through C-section vary extensively from those in children delivered through vagina. The number of C-section deliveries is also reported to be growing every year.

Rise in Aging Population to Boost Demand for Probiotic Supplements

By the end of 2016, over 550 million people were over 65 years, which translates to roughly 8% of the world’s population. Over next 30 years, the number of individuals aged 60 years or above is projected to witness 3X, exceeding 1.5 Bn, which will account for 15% of the global population.

Tapping into senior segment, probiotic supplement manufacturers are focusing on introducing products containing bacterial strains that are specifically beneficial for aging demographic. As these population intent to stay physically active and mentally sharp, the demand for probiotic supplements for senior category will continue to increase in years ahead.

North America remains a prominent market for probiotic supplements, and is estimated to account for maximum revenue share in 2019. Moreover, strong presence of market players and greater awareness regarding potential benefits of probiotic supplements among consumers in the region continue to influence the market growth.

Collectively, North America and Western are expected to account for around 70% revenue share of the global probiotic supplements market by 2019. Manufacturers are viewing developing countries in Asia Pacific from target market perspective. The probiotic supplements market in APEJ is expected to benefit from increasing disposable income, greater exposure to information through social media, and favorable government initiatives to improve preventive healthcare. 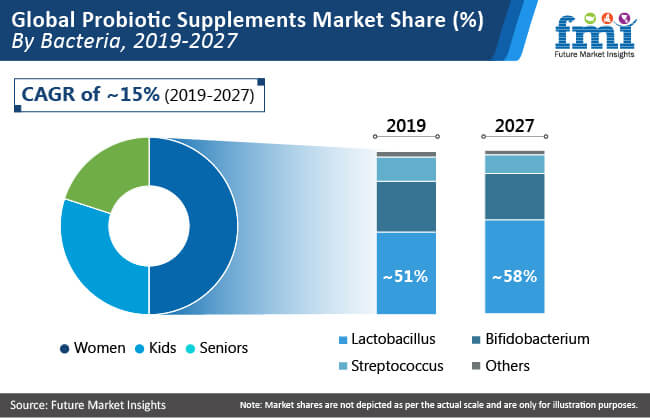 What drives the probiotic supplements market?

Probiotics supplements market is forecast to grow at an impressive pace, primarily due to the rising popularity of probiotics yoghurts. As consumer awareness regarding health benefits of probiotic supplements grows on account of increasing research initiatives, the popularity of these products will continue to rise.

Which factors may restrict growth of the probiotic supplements market?

Stringent regulations imposed on the use of probiotics in nutricosmetics, nutraceutical, infant formula, and dairy supplements, especially in countries such as the U.S. may restrict the market growth to an extent.

Which region will lead the global sales of probiotic supplements?

North America and Europe are likely to remain most lucrative markets for probiotic supplements because of their easy available in the regions. In addition, Asia Pacific excluding Japan will represent a multi-million dollar business, as the regional market expands at a robust pace.

Which segment in terms of bacteria offers most lucrative growth opportunities in probiotic supplements market?

Probiotic supplements based on lactobacillus accounted for the half of global sales in 2018. This, coupled with a buoyant y-o-y rise of 9.5% CAGR, makes lactobacillus segment highly lucrative.

Which is the most preferred distribution channel in probiotic supplements market?

Pharmacy stores are likely to remain mainstay of probiotic supplements market. However, in the coming years ecommerce will emerge as a highly lucrative category.

The global probiotic supplements market is segmented in detail to cover every aspect of the market and present complete market intelligence to readers.