The importance of Proteinase K

Proteinase K is a broad spectrum and highly specific serine protease produced by the fungus Tritirachium album Limber. Proteinase K is useful in general digestion of protein in biological samples by cleaving peptide bonds adjacent to the carboxylic group of aliphatic and aromatic amino acids. Proteinase K helps remove the unwanted enzymes that are harmful to activity of DNA & RNA and produce high molecular genomic products.

The stability of Proteinase K in SDS and urea and the ability to digest native proteins make it useful for a variety of applications, such as protein fingerprinting, removal of nucleases for protein purification, preparation of chromosomal DNA for pulsed-field gel electrophoresis.

Proteinase K considered in the report include lyophilized powder form and liquid form. The lyophilized powder is easy to store and the integrity of product remains the same for a long time. The required stock solution is made by adding distilled water at the time of reaction and it saves the wastage of product.

Growth of the global Proteinase K market is primarily driven by increasing prevalence of chronic diseases, increasing investment by government in research, rising global demand for gene therapy and increasing consumer awareness. In addition, good product stability and specificity and low production cost and wide application are expected to fuel market growth over the forecast period.

However, good availability of other proteases and introduction of new sophisticated technologies that are available for DNA purification might hinder market growth over the forecast period. 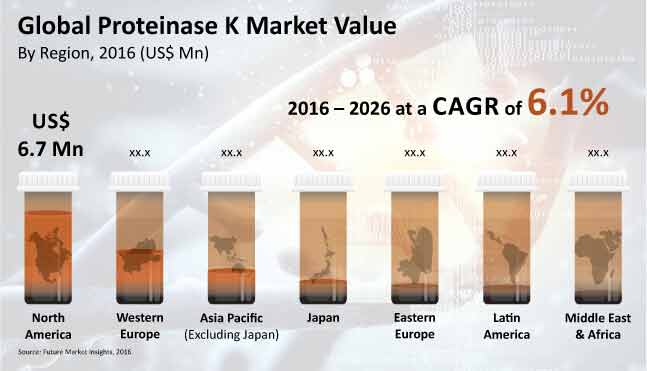