Rising incidences of cancer cases throughout the globe and concern regarding easy and accurate diagnosis can be the major factors accelerating the adoption of radiotherapy devices. Technological advancements in the devices, e.g. introduction of artificial intelligence and real time motion tracking may help manufacturers to accept more demands. External beam radiotherapy which reduces the risk of radiation exposure is expected to grow at a good CAGR during the forecast period.

In October 2020, Mayo Clinic and Google Health have announced the utilisation of artificial intelligence to improve radiation therapy planning for cancer care. Both the organisations are creating and validating an algorithm which can automate healthy tissue and organs from tumours. With the help of modern techniques, computers calculate the dose through their algorithms which leads to improved planning and better results in curing the patient. U-net is a deep learning algorithm used by Google and Mayo Clinic which helps in providing the tiny pixels required for studying scans of tumours.

Further, governments of several countries are allocating a large share of their healthcare budget towards cancer research and bolstering this by implementing several awareness campaigns at a national level. These ancillary drivers are also fuelling revenue growth of the global radiotherapy devices market to a significant extent.

The global market has several opportunities on offer for key players in the form of increasing government support for structured cancer R&D initiatives and a provision for up gradation of existing equipment and treatment capabilities based on technological advancements.

The radiotherapy devices market is strictly governed by regulatory approvals that apply to the concerned regional markets such as the U.S. FDA Medical Device Regulatory Approval Process and the European Medicines Agency Regulatory Approval for Medical Devices; making it the most structured and well-scrutinised market for medical devices poised for good growth owing to all the factors listed above.

A US$ 4 Bn market, the global radiotherapy devices market will be distributed almost evenly across the top regional markets

In terms of market share, North America takes the cake in the global radiotherapy devices market, with an estimated 34% market share through the forecast period. Western Europe will occupy the second place, moving from an estimated 29% value share in 2017 to a little over 30% by the end of the forecast period. The Western Europe radiotherapy devices market will witness an increase of 93 basis points in its market share over the 10 year period while North America stands to lose 57 basis points in 2027 over 2017.

High income nations especially in Northern-Western Europe are well-served with radiotherapy resources, which could probably explain the relatively high market share of Western Europe as compared to other regions. Countries in some of the developing economies still face shortages of both equipment and critical machinery capable of delivering high precision conformal treatments.

Hence, the market share of regional markets such as Latin America and the Middle East & Africa are way low as compared to the share held by the developed economies such as North America and Western Europe. 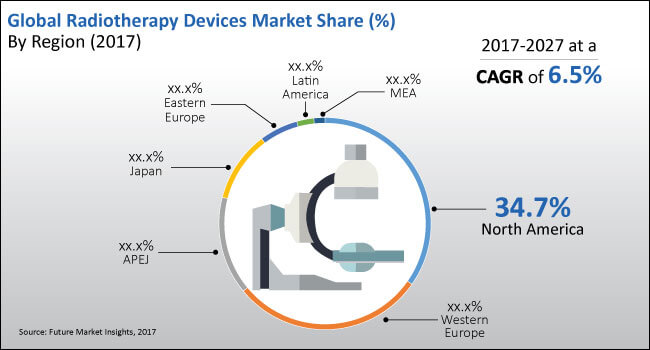 The North America regional market dominated the global radiotherapy devices market in terms of revenue in 2016, and the trend is projected to continue throughout the forecast period. North America is the most attractive regional market, recording an attractiveness index of 2.4 over the forecast period. Western Europe will be the second most lucrative regional market in the global radiotherapy devices market, exhibiting an attractiveness index of 2.2 during the assessment period.