Driven by increase neurological disorders and cardiac diseases along with rising demand for precision in treatment, the stereotactic planning software spending analysis market reached a valuation of US$ 242.3 Mn in 2020.

The increasing cases of neurological and movement disorders are creating demand for stereotactic procedures for which surgeons are demanding commercial software suites for high precision and effective planning of stereotaxic surgery. Parkinson’s disease and other movement disorders are estimated to affect 2.75 million people in the United States.

Key factors driving the demand for stereotactic planning software include increasing cases of neurological disorders, and the demand for interactive and minimally invasive surgical techniques.

Key players are focusing on collaborations and partnerships to expand their presence globally. They are also focusing on strategic developments through mergers & acquisitions and new product launches through innovations to attract consumers. With stereotactic planning software, surgeons can focus on surgery with less time involved in trajectory planning.

In the coming years, the demand for stereotactic planning software will rise amid the expansion of medical devices and healthcare infrastructure globally. According to Future Market Insights the market will rise at 4.6% CAGR between 2021 and 2031.

What is the Impact of the Increasing Number of Neurological Disorders on Growth?

What Is the Impact of the COVID-19 Crisis on Stereotactic Planning Software Spending Analysis?

Lockdowns imposed across various countries have negatively impacted the stereotactic planning software spending market. Limited production and transportation-related delays owing to travel restrictions have created obstacles amid the pandemic. With the consecutive waves of the novel coronavirus further impacting the healthcare sector, treatment of other ailments was either affected or delayed hindering short-term prospects.

There has been a significant decline in the stereotactic planning software market due to fewer patients in hospital availing these services, owing to social distancing guidelines.

Despite the difficult situation, economies are steadily recovering from the effect. Company activities have begun to grow at a gradual pace as supply and distribution networks recover. Against this backdrop, the pandemic is unlikely to have a long-term effect on the stereotactic planning software spending analysis market.

How Big is the Opportunity for Stereotactic Planning Software Spending Analysis in the U.S.?

According to the FMI study, the U.S. is expected to account for over 82% of the North American market through the end of 2031.

The high value of healthcare spending in the U.S.is one of the major factors supporting market growth. Overall healthcare spending grew at a rate of about 4.6 percent in 2019 as compared to the overall economic growth of 4% in the U.S. calculated by GDP, according to estimates by the CMSs Office of the Actuary.

Why is Demand for Stereotactic Planning Software Increasing in the U.K.?

Demand in the U.K. market is expected to rise at over 4% CAGR over the forecast period. The U.K. healthcare system is backed by a well-developed infrastructure and is largely supported by the government. The U.K. also has the highest level of expenditure in Europe.

Among the countries in Europe, the U.K. is recognized as a primary market, and it is expected to continue exhibiting high demand for stereotactic planning software through the forecast period.

What are the Key Factors Enabling Growth in China?

Companies are expanding globally with partnerships and collaborations. According to a study by the Ministry of Science and Technology of the People’s Republic of China, there have been 1.57 Mn deaths in 2018 due to strokes which was the third leading cause for death in the country. The study showed that China had the highest estimated lifetime risk of stroke from age 25 years onwards accounting for 39.3%  of the population.

Besides, there have been continuous investments in the healthcare expansion of the country for better treatment facilities.

How is Patient Awareness and Healthcare Spending Boosting Sales in India?

In 2021, India will account for over 56% of sales in South Asia. Government initiatives undertaken to give quality and affordable healthcare are anticipated to supplement the development of India's healthcare system, thereby boosting the stereotactic planning software spending analysis in the country.

According to a WHO report, the prevalence of dementia in India is 1.9% for people over the age of 60 years. In the context of the large population and demographic transition, the total numbers are estimated to more than triple in the next 35 years, reaching over six million by 2040.

The economic assessment of epilepsy in India is US$ 344 Mn per year (equivalent to 88% of average income per capita), and that the total cost for the estimated five million cases resident in India is equivalent to 0.5% of gross national product.

Why is the Demand for Integrated Stereotactic Planning Solutions Rising?

Integrated stereotactic planning solutions are expected to remain a popular choice for many end-users since they significantly reduce accommodation space and are considered easy to use. 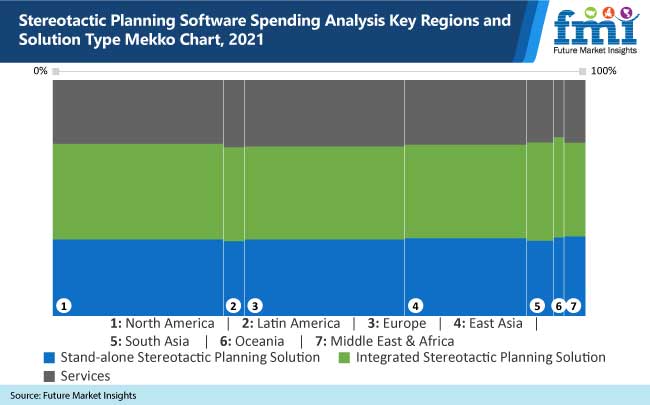 Why Are CT Images Preferred for Imaging Modality?

Stereotactic planning software fuses with MRI images and CT into a 3D volume, assisting neurosurgeons to target anatomy concealed deep within the brain tissue. Of these, CT Images are estimated to dominate and account for over 46% of the market by 2031.

Why Do Hospitals Hold a Larger Share in Stereotactic Planning Software Spending Analysis?

Hospitals are expected to contribute a maximum revenue share of more than 52% in the global stereotactic planning software spending analysis owing to the higher number of patients' foot-falls in these facilities.

Advancements in medical care approaches in developed nations like the U.S. and the U.K have brought about improved treatment options for various diseases and disorders. This has brought better options and treatment provisions.

Hospitals are the first preference for patients requiring surgical treatment approaches. Stereotactic planning is now preferred in the treatment of small-cell lung cancer and prostate cancer. This will provide a thrust to hospitals as preferred end-users during the forecasted period.

Companies operating in the stereotactic planning software industry are aiming at strategic collaborations and partnerships with other manufacturers to expand their production capacities and and global presence, addressing the demand of an expanding patient pool.

Manufacturers are also focusing on the expansion of manufacturing facilities globally to maintain their global presence.