The global sales for synthetic camphor witnessed a minor slowdown in the Covid-19 crisis as all the factories were closed and supply of only basic necessity goods was permitted. Since the lockdown has been lifted up to improve economic conditions, the manufacturing companies are trying hard to gain traction and attract customers globally through innovative launches and technological upliftments in 2021.

Adoption of business strategies like research and developments, new product launches, product approvals, patents and events, joint ventures, product innovations, partnership agreements, collaborations, digital marketing, mergers and acquisitions etc continues to be on the prime attention of leading players to emerge as a recognized and profitable business firm. Almost all key players are following these strategies.

For instance, Merck, a leading manufacturer of synthetic camphor, announced the addition of a single use assembly unit at its Life Science Center in Molsheim, France. The company has invested € 25 million and is focusing on accelerating its plans to expand in Europe. The further production sites are going to be located in Danvers, Massachusetts, USA, and Wuxi, China.

In addition to this, in February 2021, Merck announced its partnership with BioSTL to advance the bioscience and innovation ecosystem. The partnership is aimed to help the local bioscience startups in growing their businesses under the guidance of Merck employees who will serve as mentors. The partnership will further help in promoting diversity, strengthening science, technology, engineering and math (STEM) education and employment opportunities for women and underserved communities.

In terms of growth of the market, the North American region is anticipated to stay ahead at a promising rate during the forecast period owing to increasing production of camphor contained products. China is expected to witness growth because of the increasing number of pharma grade synthetic camphor manufacturers. Manufacturers are focusing to expand in the Asia Pacific region mainly because of the increased government spendings in the developing nations.

Being classified as non-prescription drugs and OTC (Over The Counter) sales augment the growth of such products and have an indirect but significant impact on the synthetic camphor market, raising its demand around the world.

From a regional perspective, the production of synthetic camphor is dominated by the manufacturers based in India and China. With large production capacities and advanced technologies producing synthetic camphor of high quality turns out to be economical in such countries. With the low labor cost and availability of area, set up costs of a manufacturing unit is also noted to be economical.

With the intense scrutiny by the environmental and health authorities over the oral administration of synthetic camphor, its non-toxicity as an inhalant and topical rub ointment helps drive its sales to the pharmaceutical industry. Acts such as EU Medicines Directive 2001/83/EU of the European Union, 21 CFR 341.85 of the US FDA, among others have approved the OTC sales of synthetic camphor containing products. This is likely to have a significant impact on the synthetic camphor market, thereby creating opportunities throughout the forecast period. 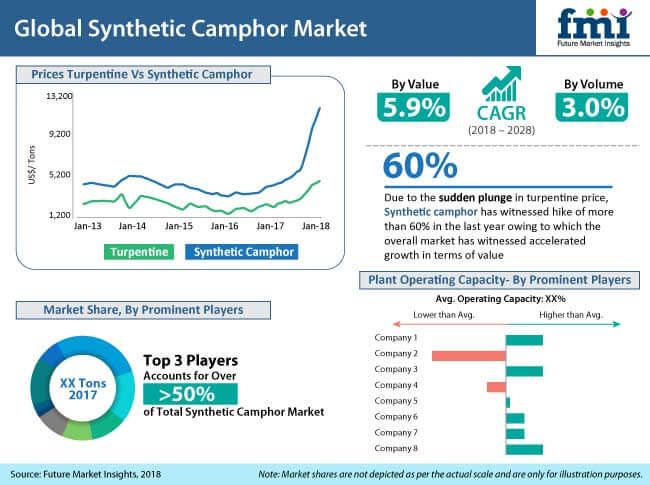 Consolidation in the synthetic camphor market universe positions the producers to hold a near monopoly relating to prices and has in turn negatively impacted the pricing of synthetic camphor in the recent past.

The global synthetic camphor market is witnessing shutdown of few manufacturing units due to the intense competition in the chemical industry in Asia Pacific. Another contributing factor to this is that the prices for raw material such as turpentine oil has increased in the recent past. With synthetic camphor market being a very cost sensitive market, the producers with insufficient funds or debt chose to make an exit from the market.

These manufacturers are involved in exporting their products and are channelizing their efforts towards establishing channel partners in their respective target markets. One of the key synthetic camphor manufacturer, Kanchi Karpooram Limited, is noted to be in the final stages of expansion of its facility in India, awaiting environmental clearances. Once approved, the company will be able to double its synthetic camphor production and accelerate its revenue growth.