The 3D cell culture market is largely dominated by major key players such as Thermo Fisher Scientific Inc., Merck KGaA, Becton, Dickinson and Company, and Lonza, Corning Incorporated, and Synthecon, Inc. that serve various types of 3D cell culture products. The key manufacturers of 3D cell culture are focusing on research and developmental activities and they are also trying to focus on the clinical trial outcomes. Many companies are actively involved in acquisitions to introduce new innovative products in the market.

The awareness regarding oncological diseases is increasing among the population, which is expected to increase the growth of the 3D cell culture market. Cell culture is an important part of Oncology as it is involved in the clinical trials and also plays an important role to understand the morphology and physiology of the cells in a given environment.

According to the European trade association, the research investment for drug discovery has grown by 5.2 times in the U.S. and 3.3 in Europe from 1990 to 2003.

The traditional methods of drug discovery are inadequate and less relevant to the pace of the growing life science research and development. 3D cell cultures are, therefore, expected to generate a major revenue share in the market for drug discovery application.

3D cell cultures are mainly used to observe the cell interactions and the abnormal behavior of cells and play a major role in the development of personalized medicine. 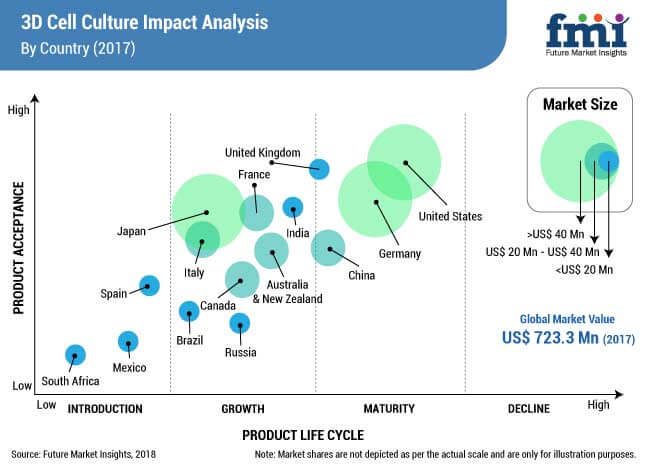 The competition section of the 3D cell culture market represents the profiles of the key players operating in the 3D cell culture market based on the products they offer and the total revenue of the companies. Some of the key players featured in this report include Thermo Fisher Scientific Inc., Merck KGaA, Becton, Dickinson and Company, Lonza, and Corning Incorporated.

Corning, one of the major leaders in 3D cell culture market, manufactures cell culture products, which include consumables (such as plastic vessels, specialty surfaces, cell culture media, and serum), as well as general labware and equipment, which are used for advanced cell culture research.

3D cell culture creates an artificial environment for the growth of the cells to study their behavior in response to the given environment. 3D cell culture can be defined as the culture of living cells which forms a three-dimensional structure and mimics a tissue or an organ. 3D cell culture is highly used for its convenience and innovative features as compared to other cell culture methods.

Based on product type

Based on end user