The market for automotive exterior trim parts is benefiting immensely with the use of light-weight plastics which are proving to be critical in the use of vehicle trim and exteriors.

These are not only helping to reduce vehicle weight but are also weather resistant and help to reduce overall emissions and are more fuel efficient. The market is also seeing a high influx of beautifully engineered and dynamic front and rear bumpers that portray greater design freedom.

Polyamides, polyesters, thermoplastic olefins and polypropylene are some of the stylized plastics that are enhancing functionality in vehicle trim. Not only are some of these recyclable but are also helping reduce overall environmental footprint.

Manufacturers are able to use these scrap materials in a highly cost-effective manner. Whilst reducing the overall cost of the material millions of pounds of toxic plastic is saved from going into landfills.

Hybrid materials which use a mix of steel and plastic are being used in exterior trims offering structural strength and greater crash-resistance.

Amidst automotive exterior trims and parts, bumpers have evolved into intricate and beautifully designed pieces that are aesthetically fitted on to vehicles. Plastic and polymer built bumpers are bespoke and speak of elegance and freedom in design.

Thermoplastic olefins, PP, polyamides and polyesters are some of the commonly used plastics. With additional reinforcement provided to them, modern-day car bumpers have very high impact resistance. Recyclable plastics and polymers are also helping manufacturers lower their carbon footprint. This also has the potential of reducing the poundage that is added to landfills every year.

Bumper designs such as those with air splitters that are controlled by computers are soaring on popularity. Cars such as the Alfa Romeo Guilia are showcasing this new design. The splitter opens up on braking with an adequate down force of 220lb/100 kg. This greatly improves the vehicle’s aerodynamics.

Cars such as the Fiat Panda are showcasing state-of-the-art hybrid bumpers that are made of a combination of both plastic and steel. Through this, manufacturers have not only achieved light-weighting but also in-built crash resistance.

The bumper is made of honeycombs made out of plastic which crush on impact, thus reducing overall damage and also absorbing the impact. The bumper segment is set to capture 13% of value share through 2030.

The use of aluminum in exterior trim parts has risen nearly 3%, tantamount to 420 pounds per vehicle. This has led to an uptick of parts used in trucks in the heavy vehicle segment. Aluminum is used in the following:

Following suit are polymers, composites and plastics which have also garnered sufficient traction in the use of automotive parts. In the exterior trim parts, plastics and polymers have bought about unprecedented revolution in textures and designs. From roof rails to bumpers, the use of plastic and composites have not only given car makers huge leeway for innovative concepts but also better gas mileage.

This also allows manufacturers to manage energy, lower their manufacturing costs and use techniques for lithe and sleek exteriors.

Towards this, bio plastics such as bio-based polyamides are being increasingly used in automotive. These are partly derived from castor beans and sugarcane which are renewable feedstock. An instance of this would be the translucent roof PLA/kenaf and bio-composites used in Toyota 1/x plug-in hybrid vehicles. Currently bio-composites account for 10% of plastic parts in any modern car

The automotive exterior trim parts market is fairly fragmented, thus entry barriers to it are low. Manufacturers have been on an M&A spree with automotive majors undertaking large-scale cross border acquisitions.

In China, for instance HASCO, one of the most prominent car exterior parts manufacturer entered into a joint venture with Johnson Controls - Yanfeng Automotive interiors to cater to the diverse needs of automotive majors such as BMW, Mercedes Benz, Ford, BMW and GM across different countries in Asia, Europe and North America.

The presence of foreign companies in various regions has further strengthened their foothold. A good example would be of Bosch which has close to 38 plants in China with a staggering 60,000 people at its helm.

Efforts are also being channelized towards the use of greener, bio-based polypropylene from 100% renewable feedstock. Mazda in its R&D extensively researched on a prolific bio-route to innovate and produce polypropylene from a cellulosic biomass which will be used in roofs, bumpers, sidings, dashboard carriers, door pockets and consoles.

Similarly, the Tong Yang Group with huge manufacturing plants in Taiwan, China, US and Italy is innovating extensively in plastic trim parts by techniques such as PU Forming, SPM, Vibration welding etc. Their injection molding techniques are being used to produce grilles, covers for automotive bumpers and vehicle instrument panels.

China’s exponential growth in East Asia can be attributed to car parts businesses shifting from traditional exterior trims to EV parts with the spurt in volume growth of electric vehicles. 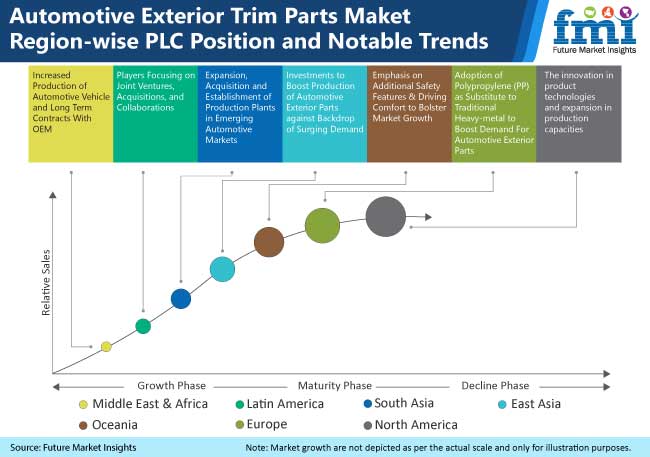 Following East Asia is North America which is projected to create an incremental opportunity 1.6X that of Latin America through 2030.

A large chunk of them have been able to sustain growth with Revenues growth coming from a highly specific, technology enabled product range.

Trade has also been an instrumental factor in the market’s expansion. Imports of exterior trim parts have risen considerably, by at least 13% Y-OY from the year 2017.

Germany and Japan have led trade being two of the largest suppliers of automotive trim parts accounting for 27% and 25% respectively with US being the major importer.

With digitization seeping into almost every sphere of automotive, exterior trim parts suppliers too will greatly benefit. This coupled with enhanced mobility solutions will bring in superlative changes in market dynamics.

Future Market Insights in its analysis predicts that the following aspects will greatly determine the future of automotive exterior trim parts market: