Future Market Insights forecasts that the global sales of automotive ignition coil is estimated to be nearly US$ 2,550 Mn in the year 2017 and is projected to be valued at close to US$ 3,820 Mn by the year 2026, registering a CAGR of 4.5% during the forecast period. The global automotive ignition coil market is projected to represent an incremental dollar opportunity of nearly US$ 1,400 Mn between 2016 and 2026.

The rise in the sales of automobiles globally and an increase in vehicle parc positively affect the sales of automotive ignition coils. Even though the recent economic conditions the world over have remained unstable; on an average, the global automotive industry has witnessed satisfactory growth. This is especially true of the emerging economies, where the automotive production is expected to be significant as compared to developed economies.

This is mainly because of rising urbanisation, per capita income growth and a rise in the living standards in these emerging economies. During the assessment period, fleet on road is also expected to rise at a modest rate, thus providing an impetus for the growth of the global automotive ignition coil market.

Globally, there is an increased emphasis on sustainability and support for lower fuel consumption along with lower emissions, in order to protect the environment and curb air pollution. Hence, automotive market players are innovating and developing new ways to enhance the overall efficiency of the automobiles. Keeping these points in mind, and owing to the requirement for higher ignition voltage coupled with restricted space in the engine compartment, there are increasing novel demands for modern ignition coils.

In addition, the mixture of air and fuel must be ignited at the right time with optimum ignition energy so that fuel present in the engine is combusted completely. For the same reason, there is an increased adoption of advanced ignition coils that meet these stringent criteria. This in turn is driving the demand in the overall market for advanced ignition coils and thereby creating a positive impact on the global automotive ignition coil market.

In order to tackle the threat of increasing air pollution originating from the exhaust of automobiles plying on the roads, there is an increased emphasis on the development of vehicles that run on alternative power sources. Combined with this, fluctuation in oil prices further aggravates the situation and fossil fuel based economic development is not perceived as sustainable. Especially in developed regions such as North America and Europe, there is an increasing adoption and use of electric cars such as battery electric vehicle (BEV) and plug-in hybrid electric vehicles (PHEV) and their use has increased manifold over the past few years.

Furthermore, the research and development going on in powering cars with solar energy has further intensified the market growth of such vehicles. This, coupled with increasing urban population, incentives for electric vehicles, decreasing battery prices, strengthening public transportation infrastructure in developed and emerging countries and inter-governmental initiatives for electric vehicles are promoting the use and propagation of electric cars all across the world. As ignition coils are not used in electric cars, the aforesaid factors are expected to pose a significant challenge to the growth of the global automotive ignition coil market over the coming years.

As far as vehicle type segment is concerned, the passenger cars segment with a market attractiveness rating of 5.0 is expected to be a highly attractive segment during the forecast period in the global automotive ignition coil market. The passenger cars segment is expected to witness growth mainly due to increasing demand for compact cars. This segment is estimated to be valued at more than US$ 1,920 Mn in 2017 and this is anticipated to increase to approximately US$ 2,965 Mn by the end of the forecast period, witnessing the highest segmental value CAGR of 4.8% in the global automotive ignition coil market. 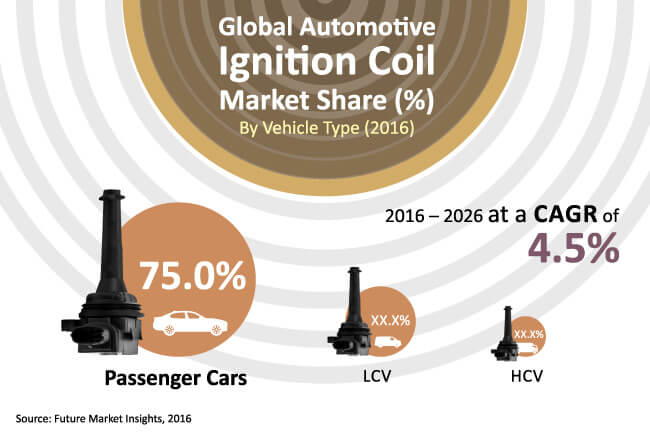 The pencil ignition coil product type segment remains the key product type segment, accounting for over 1/3rd of the total automotive ignition coil sales in the year 2015. Due to the reduction in the size of engines, the production of pencil type ignition coil receives a further boost. As far as the most lucrative and dynamic region is concerned, Asia Pacific Excluding Japan (APEJ) and Western Europe are likely to remain at the forefront in the global automotive ignition coil market (both from the supply side and demand side) all through the assessment period. There is a significant market potential in the growing markets of China, India and Germany.