The hot stamping segment in the India automotive stamping market is estimated to be valued at more than US$ 650 Mn in 2017 and is expected to represent incremental $ opportunity of more than US$ 1000 Mn between 2016 and 2026.

The cold stamping segment is expected to lose a little more than 115 BPS during the anticipated period. However, it is also expected to expand at a CAGR of 10.6% over the estimated period. The cold stamping segment of the India automotive stamping market is predicted to be valued in excess of US$ 3400 Mn in 2017 and is expected to represent incremental $ opportunity of more than US$ 5000 Mn between 2016 and 2026. This segment is slated to be valued at more than US$ 8000 Mn by 2026.

India has been experiencing a robust increase in four wheeler production and marginal growth in two and three wheeler production – this has been the country’s answer to the increasing demand from domestic and international markets. The demand for cold and hot stamping is directly proportional to the production of vehicles and demand from the aftermarket is comparatively less. The growth of automotive sales in India is indirectly creating robust development in the hot and cold stamping segments and this trend is projected to continue during the forecasted period.

This is likely to boost the growth of the cold and hot stamping segments in the India automotive stamping market. The various initiatives taken by the Indian government as well as the automotive industry to make India a world-class automotive hub will attract significant investment in the domestic manufacturing sector by OEMs; which in turn, will lead to increase in demand for stamping facilities, thereby driving the growth of the hot and cold stamping segments.

It is observed that there is a growing preference for the hot stamping process in the India automotive stamping market as it enables manufacturing of lightweight automotive components with higher strength. It is a cost-effective technology used to manufacture complex parts without many pressing issues. The hot stamping process has high penetration in North America, Europe and China. However, significant investments made by some of the leading players in the market towards hot stamping are expected to draw the attention of other manufacturers towards this technology. 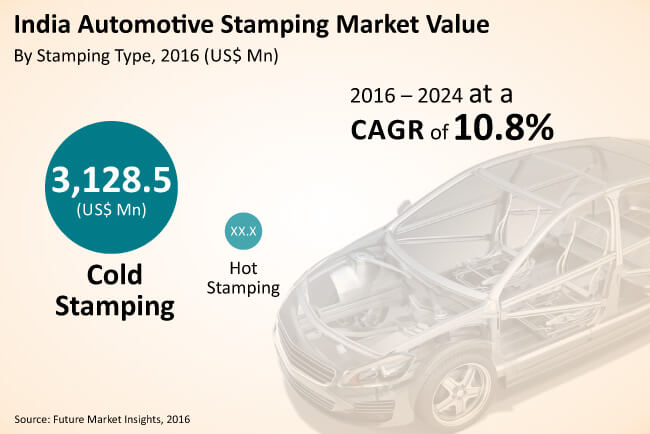 Over the past decade, weight reduction and performance improvement have been the prime focus of automakers in the Indian automobile industry. However, these two sets of attributes can only be achieved through the use of advanced materials that are costlier than the existing ones. These days, manufacturers are focussing on reducing manufacturing costs.

Furthermore, the complexity of operations of newly imported equipment is another factor that might restrain existing players in the market and stop them from adopting new technologies. This, in turn, can act as a deterrent to the growth of the stamping segment in the India automotive stamping market.