The external systems are available in the independent aftermarket as kits, and this is expected to act in favor of the market. Asia Pacific is expected to play a crucial role in the aftermarket of automotive seat heaters with China topping the list. This can be attributed to the mass presence of local vendors in the region and also to the fact that the aftermarket products are relatively cheaper.

Manufacturers are offering seat heaters at low costs and hence, these are available in the aftermarket at a low price for all car models. This availability of seat heaters for all models at lower costs has created a huge aftermarket for seat heaters. Heated seats or seat heaters were initially fitted in high-end cars; however, nowadays many models from all classes feature heated seat systems.

It is found as an optional feature in many models or as a winter pack. Furthermore, it is also a common feature presented by many electric vehicle manufacturers in their vehicles. 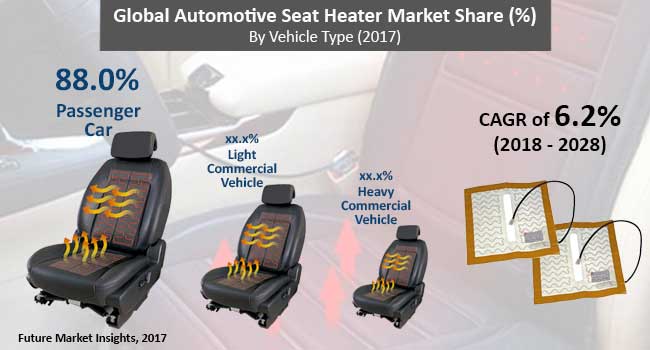 Given the high reputation of the U.S. as a prominent vehicle manufacturer, OEMs are focussing on deploying quality and new products, such as automotive seat heaters, which increase the comfort level of passengers in cold areas and improve the functioning of an automobile. Luxury vehicles have more than one seat heater attached to the system. These factors are expected to make automotive seat heater manufacturers remain focussed on strengthening their research and development initiatives, which will drive the overall seat heaters market during the forecast period.

The global automotive seat heater market has been segmented into: