Baobab powder is gaining traction in the beverage industry

The functional beverage industry continues to grow annually throughout the forecast period. Further it is expected that the sports, nutritional and energy juice sales will increase at an accelerated rate during the assessment period. With an increased focus on health and wellness, beverage ingredients play a vital role and baobab powder beverages are gaining traction in the market as consumers are preferring nutritional drinks, which are rich in nutrition value without added sugars or other artificial ingredients.

Further, there’s a lot of innovation in the healthy beverage space with new product launches focused on functional and value added drinks. In 2016, Coca-Cola Iberia launched a new soft drink under its Aquarius drinks brand named Vive, which counts baobab extract in its ingredients.  Aquarius Vive, which is a low calorie beverage has gained volume growth of 8.5 percent. Pepsi also launched Pepsi baobab drink, under the range that includes Pepsi cucumber in 2010.

Sales of baobab powder have increased over the last few years due to its positive application in supplement and food/beverages categories, which include cold cereals, and more recently, as a functional ingredient in bars. Baobab powder is rich in dietary fibre and improves the immune system.

The baobab fruit is relatively low in protein, when compared with other dehydrated fruits, but baobab dried fruit pulp contains all essential and non-essential amino acids. Compared to other dehydrated fruits, baobab contains slightly higher amounts of cystine and serine, although the amino acid composition of all fruits does not differ significantly.

Baobab dried fruit pulp would therefore be ideal as an ingredient for adding fibre to foods, as well as raising the overall nutritional profile. However, due to the large number of substitute products available in the market presently, the market for baobab powder may get hindered during the assessment period.

Among all the regions, the markets in North America and Middle East and Africa are expected to register high CAGRs of 3.1% and 2.9% respectively in terms of volume during the forecast period. The market in Western Europe has been estimated to account for a value share of 25.1% by 2017 end. 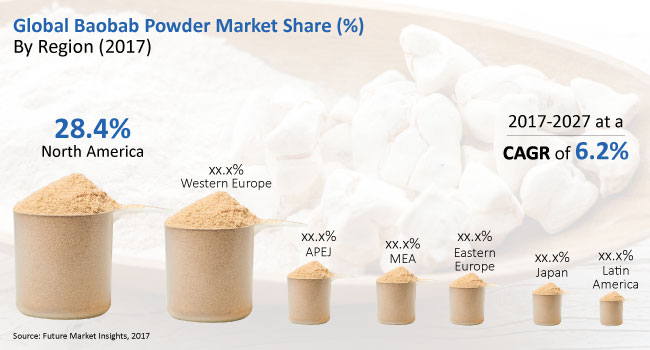 With an exotic, tangy flavour described as a cross between grapefruit, pear and vanilla, the baobab fruit has been used for years in Africa. Changing consumer preferences, tastes and eating and purchasing habits, as well other factors affecting the industry including new market entrants and demographic changes may have a bearing on the global baobab powder market. Baobab powder has grown in popularity and is widely used in supplements, capsules and food products with many claiming it to be the latest super food.