Foaming creamers are also available for instant beverages, and these can be used for beverage mixes too. The other type of foaming creamer is the cold water soluble foaming creamer that is predominantly used in the foodservice industry.

Global coffee consumption has increased in the past few years, and the demand for coffee as well as additives such as foaming creamers over the forecast period is expected to increase at a modest rate, especially in emerging markets. Coffee consumption is witnessed typically in Europe and the United States.

Between 2016 and 2018, milk prices have been fluctuating, resulting in the reduction in the value of dairy products. Non-dairy based foaming creamer manufacturers could benefit here, as the cost of production of these products is somewhat stable, considering that their raw material prices remain constant. The consumer base for non-dairy products is also increasing.

Approximately 65% of the human population has a reduced ability to digest food containing lactose after infancy. This has led to many manufacturers producing dairy alternatives such as plant-based products with equivalent taste and appearance. Non-dairy foaming creamers are made with vegetable oil and glucose syrup, and are preferred alternatives to dairy-based foaming creamers. 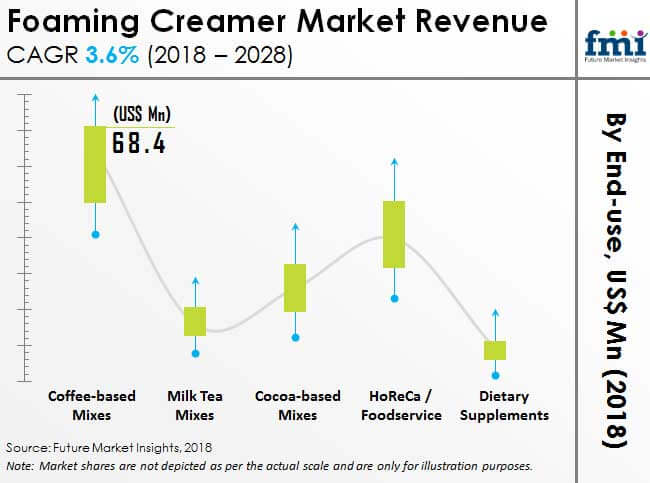 Foaming Concept Well Received Because of the Appearance and Taste

Customers are seeking an instant solution at home that replicates the sense of an indulgent treat. A drink or food that is more appealing for the senses through color, shape, fragrance, and other formulation elements is the latest thing that consumers want to engage in. The foaming of coffee and hot chocolate caused by a foaming creamer is more appealing to consumers than the regular bland look.

At the same time, consumers want their drink to taste equally good, with the foam lasting for a longer time by using ingredients such as foaming creamers, as is assured by manufacturers, which is not practical as far as a homemade alternative is concerned. Thus, foaming creamers are being used in instant beverage mixes.

Creating foam through traditional means such as frothers require extra effort, and it also does not last as long. The appeal of the foaming texture by using a foaming creamer has become more important to the foodservice segment and retail consumers alike.

The coffee culture is being adopted in several countries in Asia Pacific, especially in Southeast Asian countries, that traditionally tend to prefer tea. This has increased the demand for instant coffee mixes that provide a gourmet coffee taste and appearance, even in a sachet. Thus, manufacturers of these products are developing formulations that provide a luxury out-of-the-home experience in the instant coffee mixes by incorporating foaming creamers.

Instant-mix has become a popular product in the global beverages market, and manufacturers are trying to enhance the texture and mouthfeel of finished beverages to increase their consumer base. This is being done by adding components such as foaming creamers to produce cappuccino instant mixes.

Cappuccino instant coffee that has a foaming creamer as an ingredient is a commodity that has recently been introduced in the Asia Pacific and Middle East regions, and is expected to experience a steady growth rate over the forecast period. The foaming creamer market is expected to gain traction in the South-east Asian market with these countries already being major producers of foaming creamers.