The growth of this particular type of food flavour enhancers can be primarily attributed to the increasing awareness of natural ingredients and growing vegan and vegetarian population.

The search for organic and vegetarian products has resulted in food flavour enhancer manufacturers opting for plant-based sources such as plant-extracts or vegetable powders. Also, the population that is turning vegan has been multiplying in the recent years, which might result in plant-based food flavour enhancers gaining popularity during the forecast years.

Also, various health concerns and ethical reasons have resulted in many people opting for meat substitutes. 30% of consumers around the globe were flexitarian and reducetarian in 2016. Thus, plant-based food flavour enhancers are gaining popularity, especially in developed regions such as North America and Europe. These food flavour enhancers are now being manufactured by many companies around the globe to cater to vegan, reducetarian, and flexitarian consumers.

Few years back, the food flavour enhancer market was fragmented, with various lower- and mid-tier manufacturers that provide these food flavour enhancers to the global market. However, due to various acquisitions of these small- and medium-scale companies by top-tier companies, the number of small and medium companies has decreased, resulting in a more uniform and less diverse market.

In recent years, the food flavour enhancer market has been mostly dominated by a few top companies that have a high market share. Also, the high investments required for product innovation and expansion can only be provided by these top-tier companies.

Clean-label products are high in demand, and consumers want to know about the ingredients in food products. This has led to their expectations being high regarding transparency in whatever product they buy. Also, various certifications from regulatory bodies in the food industry add value to a product. 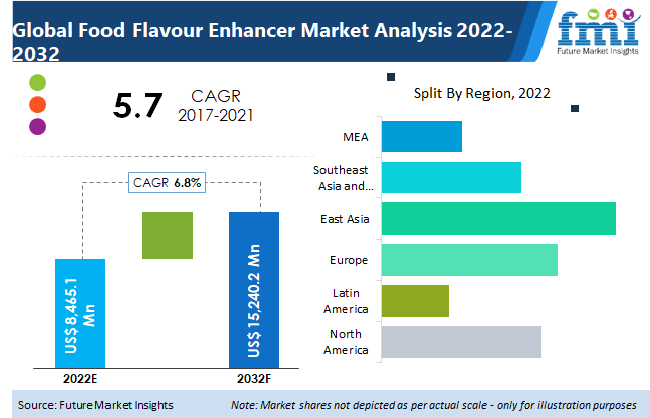 The global food flavour enhancer market is a moderately consolidated landscape, as 35% - 40% share of the market is held by tier-1 players.

Expansion of businesses through mergers, acquisitions, collaborations, and alliances are the strategies followed by key players in the food flavour enhancer Key market players focus on strategies such as adoption of new technologies to develop innovative products, and further enlargement of sales and distribution channels.

What is the growth rate of the Food Flavour Enhancer Market?

The Food Flavour Enhancer market is growing at a CAGR of 6.8%.

What are the major industry drivers?

The major industry drivers are the demand for snacks, savouries, seasonings, meat & seafood, and soups & sauces

What are the key industry strategies of the global Food Flavour Enhancer market?

What are the major regional markets for Food Flavour Enhancer?

North America, East Asia, Europe, and South Asia and Rest of APAC are the major regions in the industry.

Which region consumes the highest amount of Food Flavour Enhancer?

What are the most common types of Food Flavour Enhancer in the market?

The most common types of Food Flavour Enhancer are Glutamates, Hydrolysed Vegetable Protein and Yeast Extract

What are the market's major application segments?

What are the Key companies operating in the market?