The food landscape is rapidly changing, influenced in part by increasing inclination towards health and wellness along with growing demand for functional, fortified food products. Following a general trend for ‘personalization’ through new technologies and scientific evidence, food experiences are now tailored to specific taste of consumers.

While demand for dietary supplements continues to weigh on a same scale as increase in number of health conscious population, greater awareness of ‘hidden hunger’ or micronutrient malnutrition has led to demand for food fortification. Future Market Insights, in its new offering, turns the spotlight on Food Premix Market, and explores fortification of food using a nutrient premix to balance diets.

Synergy of Convenience and Customization to – Key Growth Promoter

Amid an exponential rise in demand for convenience, hidden hunger is becoming an issue where people consume enough calories but not enough essential micronutrients. This has led to rise in demand for food premix – complex blends of pre-scaled ingredients including vitamins, minerals, and amino acids – for use in ready-to-use supplementary food, F&B products, infant formula, and pharma OTC drugs. 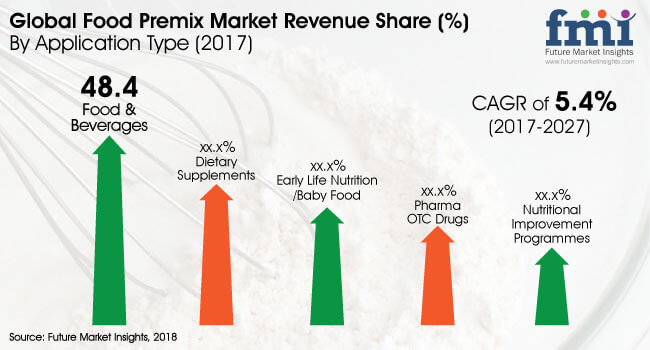 Powdered Food Premix to Stay in Demand Against Liquid Form

Although liquid form of food premix has long been the product of choice, it comes as concentrates and still requires some degree of preparation. Therefore, it lacks a strong competitive advantage over powdered food premix on the grounds of convenience.

As a variety of powdered products and those targeted for consumers with specific special dietary needs are on the rise, manufacturers are specifically focused on this category.

Vitamins as a food premix continue to account relatively high revenue share. With a wealth of information than before, modern-day consumers are increasingly relying on different channels to self-diagnose and target specific health needs. This has been compelling manufacturers to add newer specialty food ingredients to their products that can be used for health promotion in various applications.

Growth prospects of the food premix market continue to remain high in North and Europe. Consumer inclination towards preventive healthcare and robust government initiatives to control micronutrient deficiencies by food fortification in these regions have been instrumental to the market growth.

However, lack of awareness regarding the benefits of food premix, despite the highest requirements of nutritional supplements in low- and mid-income countries, is expected to represent a key challenge to the market growth.