The use of sodium carbonate, also referred to as soda ash, is slowly increasing due to increasing demand in various applications and shifting production economics. Increasing globalisation of soda ash industry is another aspect driving the change in the production economics. Moreover, the soda ash or sodium carbonate industry has witnessed increased adoption from countries in Asia Pacific such as China and India.

It is the largest market offering several opportunities for players involved in this industry. In 2017, the global consumption of sodium carbonate touched a figure higher than 47 Mn MT owing to increased demand from end users, especially for glass products. Supply of sodium carbonate is largely concentrated in North America, Asia Pacific and Europe – more than 60% of the entire sodium carbonate production is from these three regions.

According to this research study, the global pharmaceutical grade sodium carbonate market is expected to reach a significant market valuation by the end of the forecast period and projected to expand at a value CAGR of 2.8% throughout the period of assessment.

API is the chief ingredient in a drug and is biologically active. It is mainly responsible for the accelerating the effectiveness of the drug in curing diseases and related symptoms. Various players in pharmaceutical sector use sodium carbonate as APIs to enhance their drug abilities.

Also, the API application segment is estimated to be the largest presenting potential opportunities for growth. Apart form these, it is also used as a water softener and swimming pool chemical. It is expected to touch a value higher than US$ 23 Mn by the end of the period of forecast. 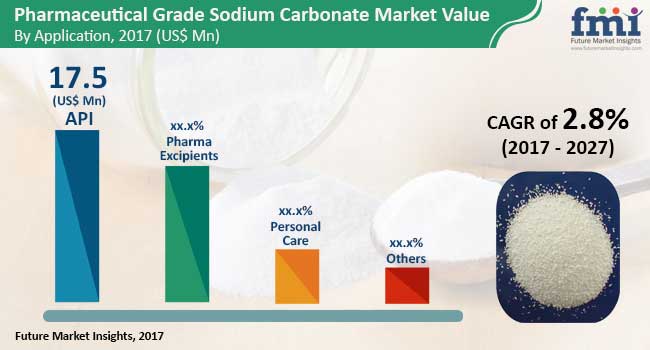